The Implications of Hubble's Law: An Expanding Universe

Like Kepler's Laws, Hubble's Law is an empirical law. Hubble discovered a relationship between two measurable properties of galaxies: their velocities and their distances. Given this relationship, though, it naturally leads to several questions. These questions are:

On the previous page, we attributed the velocities of galaxies and the relationship between their velocities and distances to an explosion. Because all of the pieces of debris from an explosion originated at the same spot, the more distant ones must be moving faster to have traveled the farthest in the same amount of time. This is an acceptable analogy, but it is not perfect. It does, however, help us understand that the universe must be expanding. Our best interpretation of the relationship discovered by Hubble is that it implies that the space between galaxies is expanding. 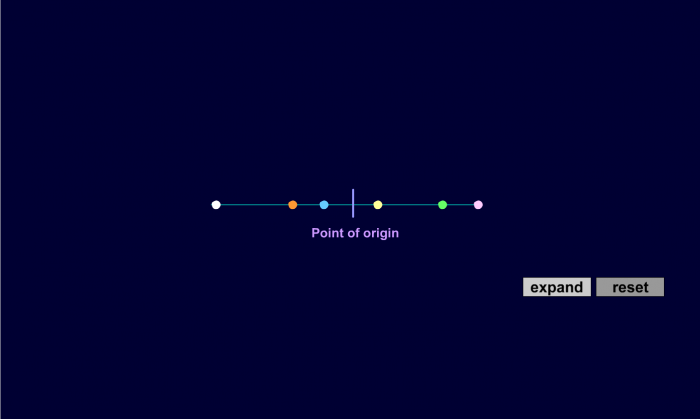 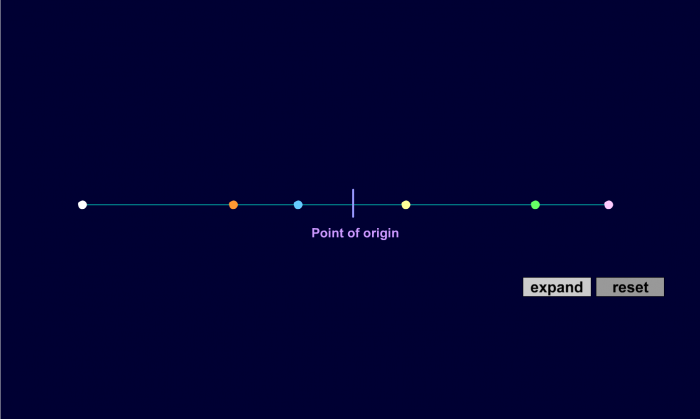 The analogy in the figure above allows us to draw several conclusions about the universe.

The next two analogies are similar to the rubber band / dot analogy, but we are going to think in more dimensions, since we know that the galaxies are not restricted to be found along a one dimensional line. Instead of a line, picture the dough for raisin bread. Inside the dough, all of the raisins are separated from each other. As the dough rises during baking, all of the raisins will move farther away from each other. Let's say that the size of the dough doubles. The distance between all of the raisins will double, and just like the dots on the rubber band, the more distant raisins will appear to have moved faster. This is represented well in the animated image from the NASA WMAP mission included below.

Figure 10.6: Animated image showing the rising of a loaf of raisin bread dough. This animation contains the same idea as in Figure 10.5, but expanded to three spatial dimensions instead of one.  The raisins in the dough are like the dots on the rubber band or galaxies in the Universe.  As the dough expands, the separation between the raisins increases, just like the separation between galaxies in our Universe.
Credit: NASA / WMAP

Both of the two analogies (rubber band and raisin bread) should allow you to picture that every galaxy (or dot or raisin) will see all other galaxies moving away if the space between them is expanding. We use one more analogy to try to explain the mathematics of the expansion of the universe and to answer another common question that arises in cosmology:

We use this analogy to answer the question:

Until this point, we have been describing the redshift of light as a Doppler shift. However, now that we understand the Universe to be expanding, we need to revise this description. The way we understand the cosmological redshift of galaxies is as follows. Picture a photon emitted by a distant galaxy towards the Earth. That photon has a specific wavelength. However, during the trip between the distant galaxy and Earth, the space between that galaxy and Earth has expanded. The expansion of space causes the wavelength of the photon to stretch, so when it arrives at Earth, it has a longer wavelength than when it left. Mathematically, this behaves exactly as if the photon was Doppler shifted. So, we interpret the galaxies as moving through space away from us. However, the proper interpretation is that the galaxies are at specific positions in space, and the space between them is expanding. An animation illustrating the cosmological redshift using the balloon analogy for the expansion of space is below.

Illustration of cosmological redshift using balloon analogy. In this animation, the wave drawn on the balloon represents the a wave of light with a specific wavelength.  As the balloon expands, the wavelength increases.  We believe this is how light behaves in the Universe. As the Universe expands, the distance between crests of the wave of light also expand, causing the wavelength to increase.  Light with a longer wavelength is redder, so light appears redshifted because of the expansion.
Credit: Penn State Department of Astronomy & Astrophysics

Does this mean that the Solar System is expanding? What about the Milky Way? Will Pluto get farther and farther from the Sun as the Universe expands? The answer is no, and it is a bit difficult to understand exactly why. Consider again a stable Main Sequence star. We discussed how in order for a star to avoid collapse, the outward force of the radiation pressure created by the nuclear fusion in the core balanced the inward pull of gravity. We can consider all objects and systems of objects in the universe subject to the same kind of balance of forces. The expansion of the universe can be thought of as a global force that is pulling on all objects. However, it is only strong on very large scales. At the scale of a galaxy, the gravitational force binding a galaxy together is much stronger than the "expansion force," so the galaxy does not expand. At the scale of the Solar System, the imbalance is even larger, so the gravitational binding of the Solar System easily overwhelms the "expansion force," keeping Pluto's orbital separation from the Sun the same over time.

‹ Hubble's Law up The Age of the Universe ›
ASTRO 801: Planets, Stars, Galaxies, and the Universe