Previous chapters have described the collection and storage of geospatial data in terms of coordinates and locations. Since a location is a zero-dimensional entity (it has no length, width, height, or volume), locations alone are not sufficient for representing the complexity of the real world. Locations are frequently composed into one or more geometric primitives, which include the set of entities more commonly referred to as:

The concepts of a point, line, and polygon (or area) have been discussed briefly in Chapter 4. In the context of the MAF/TIGER model, we will expand upon these terms and refer to them (in the same order) by the labels used in the field of Topology (discussed in more detail in section 6.5):

Nodes are zero-dimensional entities represented by coordinate pairs. Coordinates for nodes may be x,y values like those in Euclidean geometry or longitude and latitude coordinates that represent places on Earth’s surface. In both cases, a third z value is sometimes added to specify a location in three dimensions.

Edges are the one-dimensional entities created by connecting two nodes. The nodes at either end of an edge are called connecting nodes and can be referred to more specifically as a start node or end node, depending on the direction of the edge, which is indicated by arrowheads. Edges in TIGER have direction so that the left and right side of the street can be determined for use in address matching. Nodes that are not associated with an edge and exist by themselves are called isolated nodes. Edges can also contain vertices, which are optional intermediate points along an edge that can define the shape of an edge with more specificity than start and end nodes alone. Examples of edges encoded in TIGER are streets, railroads, pipelines, and rivers.

Faces are two-dimensional (length and width) entities that are bounded by edges. Blocks, counties, and voting districts are examples of faces. Since faces are bounded by edges and edges have direction, faces can be designated as right faces or left faces.

Figure 6.3 below shows an example of these geometric primitives in a realistic arrangement. In this example, note that: 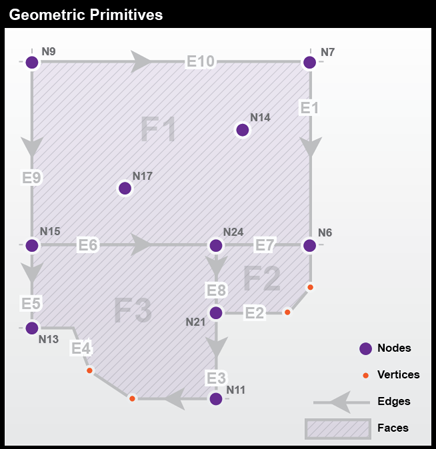 Figure 6.3: The geographic primitives include nodes, edges, and faces.
Credit: Department of Geography, The Pennsylvania State University. Adapted from DiBiase (1997).

Until recently, the geometric accuracy of the vector features encoded in TIGER were notoriously poor (see illustration below in Figure 6.4). How poor? Through 2003, the TIGER/Line metadata stated that:

Coordinates in the TIGER/Line files have six implied decimal places, but the positional accuracy of these coordinates is not as great as the six decimal places suggest. The positional accuracy varies with the source materials used, but generally the information is no better than the established National Map Accuracy standards for 1:100,000-scale maps from the U.S. Geological Survey (Census Bureau 2003) 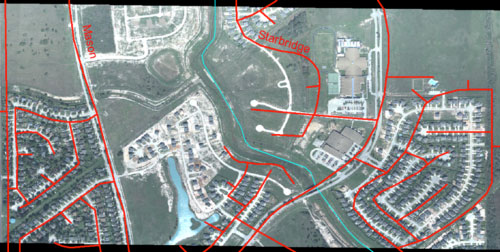 Fortunately this lack of accuracy has been addressed during a project that began in preparation for the 2010 census. During this time, the Census Bureau commissioned a six-year, $200 million MAF/TIGER Accuracy Improvement Project (MTA). One objective of the effort was to use GPS to capture accurate geographic coordinates for every household in the MAF. Another objective was to improve the accuracy of TIGER's road/path features. The project aimed to adjust the geometry of street networks to align within 7.6 meters of street intersections observed in aerial images or measured using GPS. The corrected streets are necessary not just for mapping, but for accurate geocoding. Because streets often form the boundaries of census areas, it is essential that accurate household locations are associated with accurate street networks.

MTA integrated over 2,000 source files submitted by state, tribal, county, and local governments. Contractors used survey-grade GPS to evaluate the accuracy of a random sample of street centerline intersections of the integrated source files. The evaluation confirmed that most, but not all, features in the spatial database equal or exceed the 7.6 meter target.

MTA was completed in 2008. In conjunction with the continuous American Community Survey and other census operations, corrections and updates are now ongoing. TIGER/Line Shapefile updates are now released annually.