The US Census Bureau performs many functions, including the collection of census data by mail and in the field, the production of maps and other data products, and generating various reports and documents. These products are then consumed by a wide array of users in the public and private sectors. MAF/TIGER is the geographic database system that houses the data necessary for the success of these operations.

As the population of the U.S. increased, it became impractical to have census takers visit every household in person. Since 1970, the Census Bureau has mailed questionnaires to most households with instructions that completed forms should be returned by mail. An example of the 2010 surveys can be seen in Figure 6.1. The percentage of surveys that are successfully completed and returned may surprise you — about 72 percent of all questionnaires were returned in 2010. At that rate, the Census Bureau estimates that some $1.6 billion was saved by reducing the need for field workers to visit non-responding households. 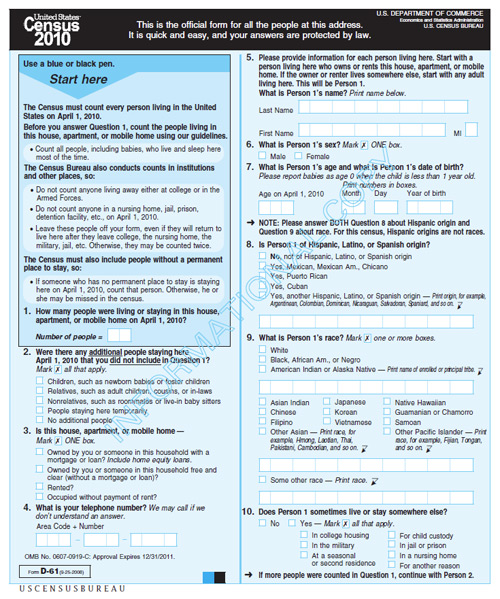 To manage its mail delivery and return operations, the Census Bureau relies upon a Master Address File (MAF).

The process of linking these data is not as simple as it sounds. Postal addresses do not specify geographic locations precisely enough to fulfill the Census Bureau’s constitutional mandate. An address is not a position in a grid coordinate system--it is only one in a series of ill-defined positions along a route. The location of an address is often ambiguous because street names are not unique, numbering schemes are inconsistent, and because routes have two sides, left and right. Location matters, as you recall, because census data must be accurately georeferenced to be useful for reapportionment, redistricting, and allocation of federal funds. Thus, the Census Bureau had to find a way to assign address referenced data automatically to particular census blocks, block groups, tracts, voting districts, and so on with a minimum of error. That's what the "Geographic Encoding and Referencing" in the TIGER acronym refers to.

A second motivation that led to MAF/TIGER was the need to help census takers find their way around. Even with a success rate above 70%, the remaining households who fail to return census questionnaires number in the millions. Census takers (called “enumerators” at the Bureau) visit these non-responding households in person. Census enumerators need maps showing streets and select landmarks to help locate households. Census supervisors need maps to assign census takers to particular territories. In return, the notes collected by field workers are an important source of updates and corrections to the MAF/TIGER database.

Prior to 1990, the Bureau relied on local sources for its maps. For example, 137 maps of different scales, quality, and age were used to cover the 30-square-mile St. Louis area during the 1960 census. The need for maps of consistent scale and quality, as well as complete coverage, forced the Bureau to become a map maker as well as a map user. Using the MAF/TIGER system, Census Bureau geographers created over 17 million maps for a variety of purposes in preparation for the 2010 Census.

Data products, including maps and TIGER files, generated by the US Census can be explored at: US Census Maps and Data.

You can also hear more about how the Census Bureau's Geography Division uses MAF/TIGER and related tools to create maps for the 2010 Census in the following podcast: Directions Magazine Census1.mp3