Geocoding is the process used to convert location codes, such as street addresses or postal codes, into geographic (or other) coordinates. The terms “address geocoding” and “address mapping” refer to the same process. Geocoding address-referenced population data is one of the Census Bureau’s key responsibilities. However, as you may know, it is also a very popular capability of online mapping and routing services. In addition, geocoding is an essential element of a suite of techniques that are becoming known as “business intelligence.” We will look at applications like these later in this chapter, but, first, let’s consider how the Census Bureau performs address geocoding.

6.6.1 Address Geocoding at the US Census: Pre-Modernization

Prior to the MAF/TIGER modernization project that led up to the decennial census of 2010, the TIGER database did not include a complete set of point locations for U.S. households. Lacking point locations, TIGER was designed to support address geocoding by approximation. As illustrated below, the pre-modernization TIGER database included address range attributes for the edges that represent streets. Address range attributes were also included in the TIGER/Line files extracted from TIGER. Coupled with the Start and End nodes bounding each edge, address ranges enable users to estimate locations of household addresses (Figure 6.7).

Figure 6.7: How address range attributes were encoded in TIGER/Line files. Address ranges in contemporary TIGER/Line Shapefiles are similar, except that “From” (FR) and “To” nodes are now called “Start” and “End.”
Credit: U.S. Census Bureau 1997.

Here’s how it works. The diagram above highlights an edge that represents a one-block segment of Oak Avenue. The edge is bounded by two nodes, labeled "Start" and "End." A corresponding record in an attribute table includes the unique ID number (0007654320) that identifies the edge, along with starting and ending addresses for the left (FRADDL, TOADDL) and right (FRADDR, TOADDR) sides of Oak Avenue. Note also that the address ranges include potential addresses, not just existing ones. This is done in order to future-proof the records, ensuring that the data will still be valid as new buildings and addresses are added to the street.

Prior to MAF/TIGER modernization, local governments relied on their own digitized data for location-sensitive projects such as property tax assessments, E-911 dispatch, and the like. The modernization project for MAF/TIGER, which began in 2002, aimed to bring the accuracy of the local data to the entire nation in time for the 2010 census. The illustration in Figure 6.8 shows the intended result of the modernization project, including properly aligned streets, shorelines, and individual household locations, shown in relation to an aerial image. 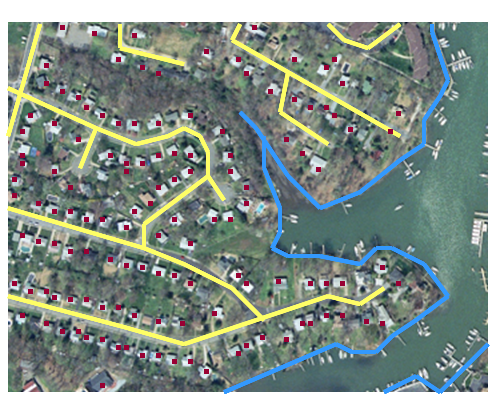 Figure 6.8: Intended accuracy and completeness of modernized TIGER data in relation to the real world. Aerial view of intended result of modernization project, including properly aligned streets, shorelines, and individual household locations.TIGER streets (yellow), shorelines (blue), and housing unit locations (red) are superimposed over an aerial image. National coverage of housing unit locations and geometrically-accurate streets and other features were not available in 2000 or before.
Credit: U.S. Census Bureau n.d.

The modernized MAF/TIGER database is now in use, including precise geographic locations of over 100 million household units. However, because household locations are considered confidential, non-federal government users of TIGER/Line Shapefiles extracted from the MAF/TIGER database still must rely upon address geocoding using address ranges.

6.6.3 TIGER’s Role in the Geospatial Boom

Launched in 1996, MapQuest was one of the earliest online mapping, geocoding and routing services. MapQuest combined the capabilities of two companies: a cartographic design firm with long experience in producing road atlases and a start-up company that specialized in custom geocoding applications for business. Initially, MapQuest relied in part on TIGER/Line street data extracted from the pre-modernization TIGER database. MapQuest and other commercial firms were able to build their businesses on TIGER data because of the U.S. government’s wise decision not to restrict its reuse. It has been said that this decision triggered the rapid growth of the U.S. geospatial industry.