Some of you in this course, perhaps even many of you, have had the experience of growing herbs or vegetables (Fig. 1.2.3) or keeping chickens for eggs or animals for meat. Although dwarfed by the enormous dimensions of the global food system, home food production is still a significant part of the food consumed by billions of earth's inhabitants. In other cases, small-scale fishing and hunting provide highly nutrient-dense foods, and coexist with modernized and industrial food systems, as any fishers and hunters in the class may be able to attest. These experiences of food production for personal or family consumption show natural-human interactions in a very simple way. To grow vegetables or hunt or raise animals means bringing together natural factors (seed, animal breeds, soil, water, fishing and hunting ranges, etc.) and also human factors (e.g. knowledge of plants, livestock, or wild animals, government policies) to gain access to food, as well as food storage and preparation, markets for tools and seeds, or human-built infrastructures like a garden fence or a chicken coop. This same interaction between natural and human factors is evident at a larger scale in the photo in Figure 1.2.4, which shows a landscape that has been transformed by a human community for food production. 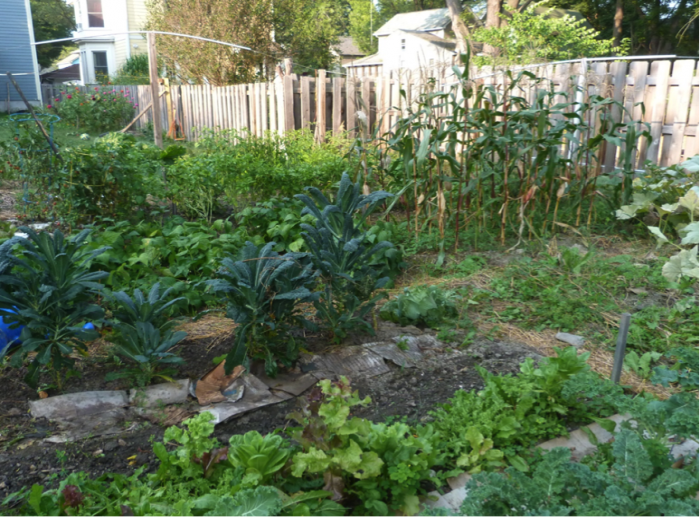 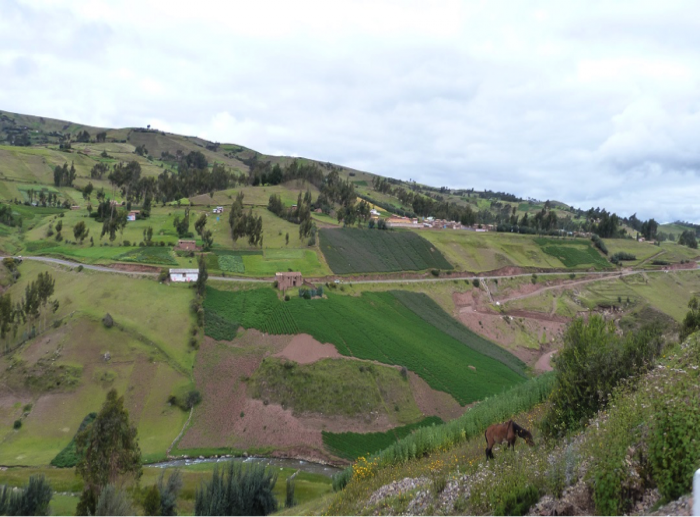 Beyond these experiences of auto-sufficient food production and consumption, however, most of humanity also currently depends on global and local versions of the food system which features a web of suppliers, producers, transporters, and marketers that supply all of us as food consumers. Compared to gardening, catching trout, or keeping chickens, these food systems together form a far more complex version of the interactions between natural and human factors that produce and transport the food that we then consume as part of global and local food systems.

One way of viewing these regional and global food systems is that they can be divided by the type of activity in relation to food, and dividing them into components of food production, food transport, and food consumption (Fig. 1.2.5). Like other diagrams we've seen so far, this diagram can be considered a concept map showing relationships between the different components of a food system. The main arrows show the flow of food through the system from the managed natural environments used to produce food and the end result of nutrition and health outcomes. There are some unseen or implicit relationships here as well, like the way that farming practices, technology, communication and education, and other attributes of human societies support the functioning of a food system, and are included in the outer system boundary. 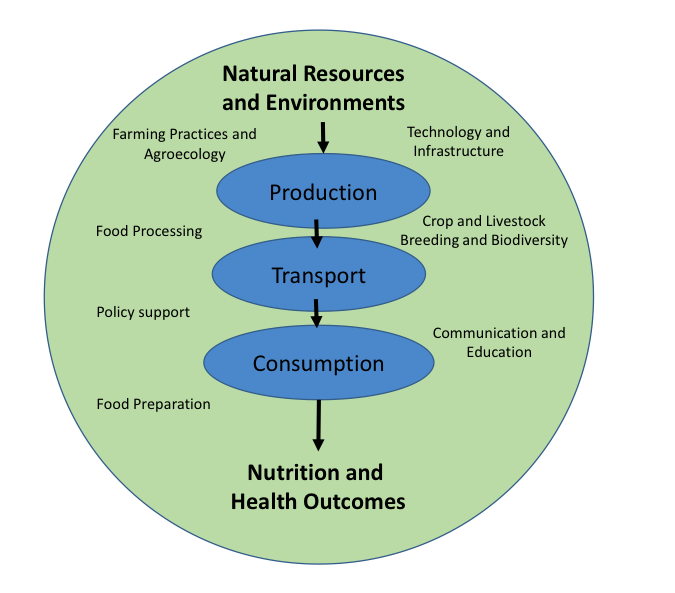 In addition to this more linear or "conveyer belt" portrayal of food systems delivering nutrition from natural resources, we may also be interested in thinking about the dramatic impacts humans have made on earth systems during the Anthropocene, discussed in module 1.1. In that light, we know that these natural systems may either be sustained or degraded by management, an important response that either maintains or undermines the entire food system. For this purpose, we may be interested in a food system diagram that makes the interactions among human and natural systems very explicit. Below in figure 1.2.6 is a version of a Coupled Human-Natural Systems diagram -- again, a concept map of sorts -- developed by an interdisciplinary group of social and environmental scientists (Liu et al. 2007) to represent the human-environment interactions in food systems. 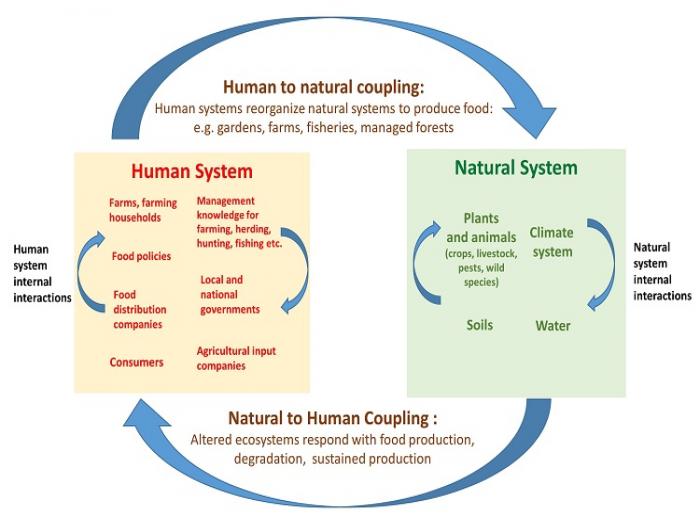 Figure 1.2.6. A food system as a Coupled Human-Natural System, a way of considering food systems that will be explored throughout the course. This more detailed presentation compared to that in module 1.1 shows that both human systems (communities, regions, food supply chains) and natural systems (agroecosystems, landscapes, water bodies) have internal interactions. Human systems also organize and modify natural systems to produce food, and natural systems respond via feedbacks (food provision, aggradation or degradation depending on the human modification and management of the natural systems.
Credit: Steven Vanek and Karl Zimmerer; modified from the National Science Foundation.
Click for a text description of the Human Natural Coupling image.
A coupled human-natural system. Heading at the top says, Human to natural coupling: Human systems reorganize natural systems to produce food: e.g. gardens, farms, fisheries, managed forests. Below this heading are two boxes, side by side. On the left is a box with the heading, Human System. Outside of the box is a descriptor that says, human system internal interactions. There are two lists inside the box on the left. The first list is Farms, farming households; food policies; food distribution companies, consumers. The second list is management knowledge for farming, herding, hunting, fishing, etc.; local and national governments; agriculture input companies. Inside this box are arrows indicating a continuous relationship among the listed items. On the right side is a box with the heading, Natural System. Outside the box is a descriptor that says, natural system internal interactions. There are two lists inside the box. The first list is plants and animals (crops, livestock, pests, wild species); soils. The second list is the climate system and water. Below the two boxes is the heading Natural to Human Coupling: Altered ecosystems respond with food production, degradation, sustained production. There are arrows around the entire diagram indicating the continuous relationship among all items.

This diagram highlights internal interactions within both the natural and human components of the food system. The natural components of food systems shown here are those we will tackle first in the first part of the course, while the latter half of the course will address the human system aspects of food systems and human-environment interactions shown as the large arrows connecting these two major components. As we saw in comparing home garden production, smallholder production landscapes and global food production chains above, food systems and their components are highly varied. However many similarities apply across the different components, actors, and environments of the food system: