What defines a system?

In this course, we will refer to the term "system" repeatedly, so it is worthwhile to think about how systems are defined. A basic definition of a system is "a set of components and their relationships". Rather than dwelling on this definition in the abstract, it's probably best to immediately think of how the definition applies to real examples from this course. An ecosystem is a type of system you may have heard of, in which the components are living things like plants, animals, and microbes plus a habitat formed of natural, urban, and agricultural environments, and all the relationships among these component parts, with an emphasis on the interactions between the living parts of the system and their interactions, for example, food webs in which plants feed herbivores and herbivores feed carnivores. A food system, as we have just begun to see so far, consists of food production components like farms, farm fields, and orchards, along with livestock; food distribution chains including shipping companies and supermarkets, and consumers like you and your classmates, with myriad other components like regulatory agencies, weather and climate, and soils. In the case of food systems we have already pointed out how these can be considered as human-natural (alternatively, human-environment) systems, where it can help to see the system as composed of interacting human components (societies, companies, households, farm families) and natural components like water, soils, crop varieties, livestock, and agricultural ecosystems. 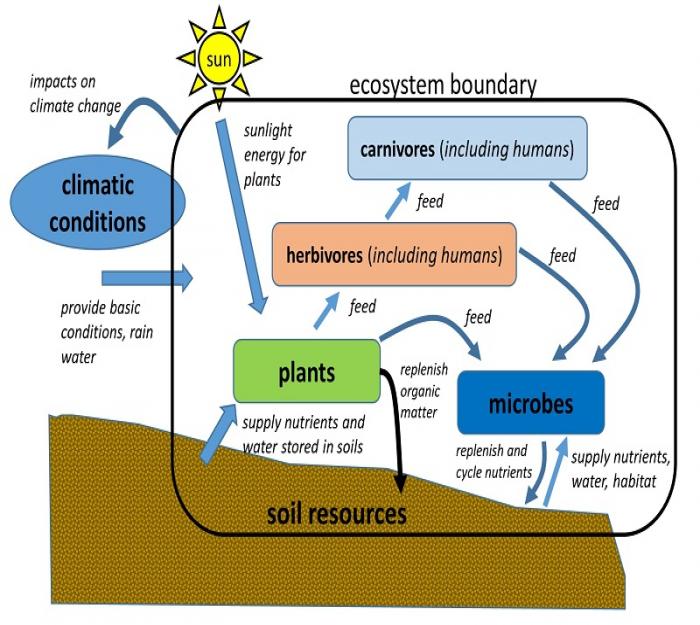 Fig. 1.2.1. A simplified diagram of a typical ecosystem. Ecosystems are a common system type analyzed by geoscientists, ecologists, and agroecologists. The black rectangular outline is one way to define a boundary for the ecosystem, where climate and sunlight fall outside the system but provide resources and define the conditions under which the ecosystem develops. This diagram can also be considered a type of concept map where for example 'sun', 'plants', and 'climate' are components, and the arrows connecting the components are relationships in the system. These relationships are now labeled as either flows (of energy, food, nutrients) or causal links, like the way that dead plants and animals end up feeding soil microbes, or the ecosystem affects the climate over time. You may be able to see how this simplified diagram could represent a far more complex system containing hundreds of plant and animal species and thousands of types of microbes, interacting in complex ways with each other and the environment. Keep this diagram in mind as a possible example when you think about completing your preliminary concept map of a regional food system at the end of unit 1.
Credit: Steven Vanek
Click for a text description of the ecosystem image.
A diagram of a typical ecosystem. Soil resources is on the bottom. The sun is at the top. There is a black line (ecosystem boundary) drawn around four boxes and the soil. The four boxes are carnivores (including humans), herbivores (including humans), plants, and microbes. Lines from carnivores, herbivores, and plants go to microbes and say "feed". There are "feed" lines from plants to herbivores and herbivores to carnivores. A line from the sun to inside the ecosystem boundary says, "sunlight energy for plants". A line from soil resources to microbes says, "supply nutrients, water, habitat. A line from microbes to soil resources says, "replenish and cycle nutrients". A line from soil resources to plants says, "supply nutrients and water stored in soils". Lines from plants to microbes and plants to soil resources say, "replenish organic matter". Outside the ecosystem boundary is "climatic conditions". A line from climatic conditions to the ecosystem says, "provides basic conditions, rainwater". A line from the ecosystem to climatic conditions says, "impacts on climate change".

Systems that contain a large number of components interacting in multiple ways (like an ecosystem, above, or the human-natural food systems elsewhere in this text) are often said to be complex. The word "complex" may have an obvious and general meaning from daily use (you may be thinking "of course it is complex! there are lots of components and relationships!") but geoscientists, ecologists, and social scientists mean something specific here: they are referring to ways that different complex systems, from ocean food webs to the global climate system, to the ecosystem of a dairy farm, display common types of behavior related to their complexity. Here are some of these types of behaviors:

For more information on complex systems properties with further examples, see Developing Student Understanding of Complex Systems in Geosciences, from the "On the Cutting Edge" program.

On the next page, we'll see an interesting example of complex system behavior related to the food system in India.