Space is the primary concept used in geography. To define it briefly, it is “an areal extent on the earth's surface, in and around which all humans exist and their activities occur” (Fellmann et al., 2013, p. 487). Thrift (2009) posits an admittedly rough typology of space—with the caveat that space is far more complex than this typology suggests—that consists of empirical space, flow space, image space, and place space.

While flow space, image space, and place space are important, empirical space is perhaps the most fundamental form of space. Empirical space is the measurable, volumetric construction of space that we invoke when we measure distances between points on a map, estimate how much paint we need to cover the walls of a room, or what size truck we should rent to haul our possessions to a new home.

Density is the frequency with which something occurs in space; measured in terms of how many things (e.g., people, houses, trees, etc.) appear per unit of area (e.g., square miles, square kilometers, acres, etc.).

Fig. 1.2: Density. The two boxes represent the same area, but differ with regard to the number of triangles within that area. Box a. has a higher density of triangles than box b.
Credit: Cristopher Livecchi

Concentration is the extent of a feature's spread over space. Things can be close together (clustered) or far apart (dispersed).

Fig. 1.3: Concentration. The two boxes contain the same number of circles but the circles in circles in box a. are relatively evenly dispersed, while those in box b. coalesce in two distinct clusters.
Credit: Cristopher Livecchi

Finally, pattern is the arrangement of objects in space. Patterns can be regular (geometric) or irregular. 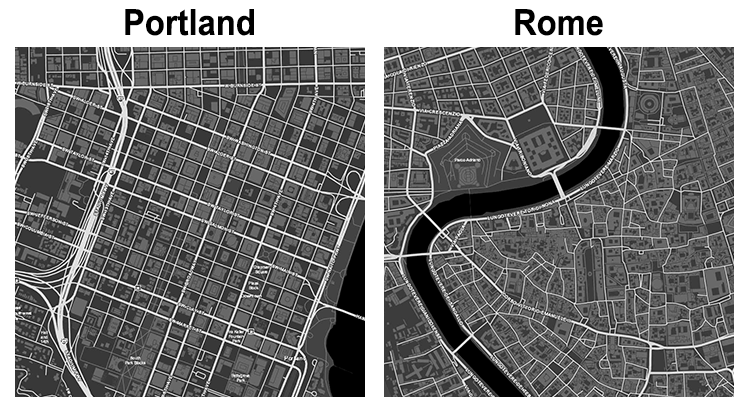 Compare sections of the street plans for Portland, Oregon, United States, and Rome, Italy. Although not perfectly regular, we can easily characterize sections of Portland as following a grid pattern. Rome, by contrast, appears to be a mix of canted grids on the periphery and irregular and meandering streets in the center. The consistency of Portland’s street plan reflects its more recent creation; the mixed approach in Rome reflects several centuries of changing urban planning practices.

Note: Registered students can access the readings in Canvas by clicking on the Library Resources link.