Native copper occurs in a very limited supply, so the start of the Copper Age is marked by the discovery of smelting copper from its ores which allows for a ready supply of copper. The two basic naturally occurring copper (II) carbonate minerals are pictured below. 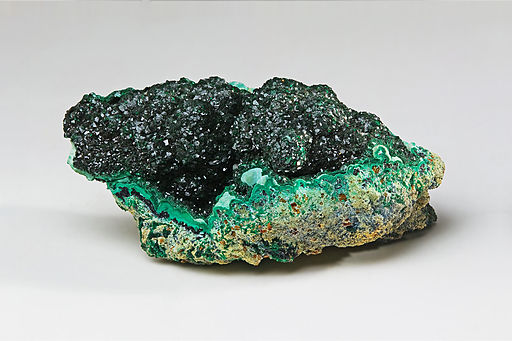 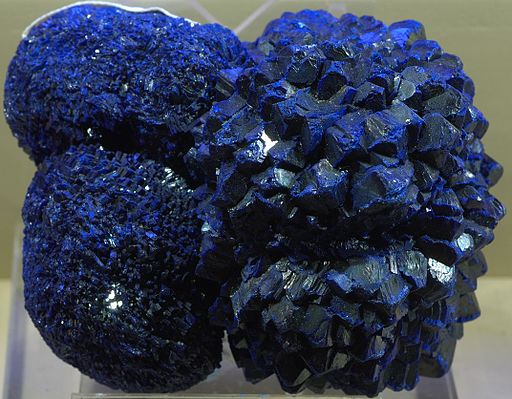 Copper is a very malleable material, unlike flint, which at the beginning of the Copper Age was the dominant weapon and tool material. Although copper is soft it does have a significant advantage over flint. It can be repaired. Native Americans used native copper beginning circa 6000 BCE. As mentioned, the supply of native copper is very limited and its supply was easily exhausted. Copper ores, on the other hand, were readily available. However, to extract the copper from copper ores smelting was required.

What is smelting? Smelting is a process that uses heat and chemistry to drive off other elements such as gases or slag, leaving behind only the metal. Typically, ores are impure and require a flux to separate the metal from the slag. Flux is an additive used to change the impurities from a form that is inseparable from the metal to a form that is separable. For example, adding iron ore as a flux during the smelting of copper can transform the impurity solid silicon dioxide into an iron-silicon oxide. Unlike the solid silicon dioxide which remains in the liquid copper, the iron-silicon oxide floats to the top and can be skimmed off. Smelting is different than melting in that in melting you have to be able to raise the temperature to the melting point of the material. The Egyptians did not have the ability to reach the temperatures needed to melt the copper minerals outright.

How Did Egyptians Discover that Malachite and Azurite Contain Copper?

It is unknown exactly how the Egyptians discovered that malachite and azurite contain copper. Here are a couple of possibilities.

Egyptians used malachite as a pigment and cosmetic, including as a distinctive eyeliner. While a normal open fire would not reach the temperatures required to melt bulk malachite, in powder form it is possible that accidentally putting Malachite powder on the coals of the fire could produce small balls of copper.

A second, and more likely possibility centers around the Egyptians using malachite as a pottery glaze. Small balls of copper could have been formed in the pottery kiln during firing, and then noticed by kiln workers after cooling.