If, instead of starting with a square, we start with a triangle and continue to add atoms, packing as tightly as we can, we will end up with a layer of atoms as shown in the figure below.

Now let me put an atom on top of that first layer over one of the 'B' positions and let it rest down into one of the valleys. I can now place two more atoms in nearby 'B' positions so that each will rest in their own valley in such a way that all three atoms will touch and form a triangle. Now let me add more atoms to the second layer, packing them in as tightly as possible. These two layers are shown in the figure below. If you look closely, you should be able to see that the second layer only covers half of the valleys produced by the first layer. The 'C' valleys are left uncovered. In fact, half of the valleys of the second layer lineup with the unoccupied 'C' valleys of the first layer.

Now let’s put a third layer where the atoms are placed where the unoccupied valleys of the first two layers lineup, the 'C' valleys. It is a little difficult to visualize, but if one of the top layer atoms is one corner of our cube and that corner is pointing out then we obtain the cube shown in the figure below. 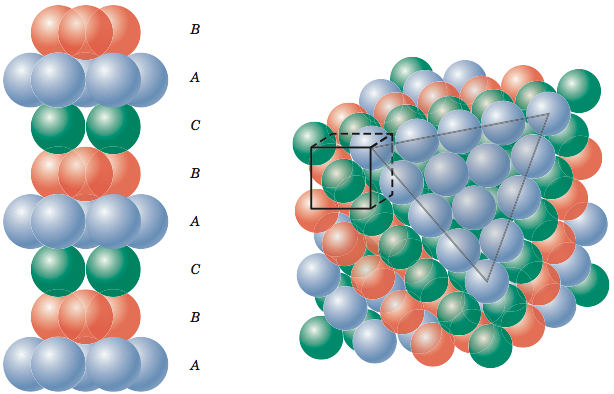 In the next section, we will discuss our fourth and last crystal structure.