It is not surprising that gold was the first metal processed by the Egyptians. Very few metals are found in their native state, i.e., not bound to other elements in a compound such as a mineral. Copper is very rarely found in nature as an element and iron is typically only found as an element in some meteorites. Iron from meteorites was extremely rare in Egypt and was known as metal from the gods. Gold, however, is routinely found in nature as an element unlike copper and iron, and most other metallic elements. Gold, although rare, can be found as flakes or nuggets. As shown in the illustration below from an ancient Egyptian tomb, the Egyptians used charcoal and blow pipes to reach the temperatures needed to melt gold. Also, ‘slag’ (impurities) were skimmed off the molten gold. 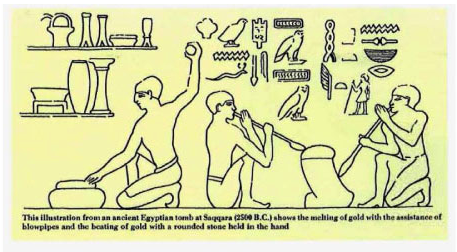 The molten gold was poured into molds to form jewelry and other items. In addition, the Egyptians were able to hammer gold into very thin (5 µm) leafs. Gold is a malleable material. Malleability is a material’s ability to be deformed under compressive stress, i.e., to form a thin sheet by hammering or rolling. A ductile material (ability to be deformed under tensile stress, i.e. can be pulled into a wire) has to be a malleable material as well, but malleable materials do not have to be a ductile material. An example of this is lead. Lead is malleable but when pulled to form a wire it pulls apart. As you can see malleability and ductility are closely related but do not possess the same definition in material science. 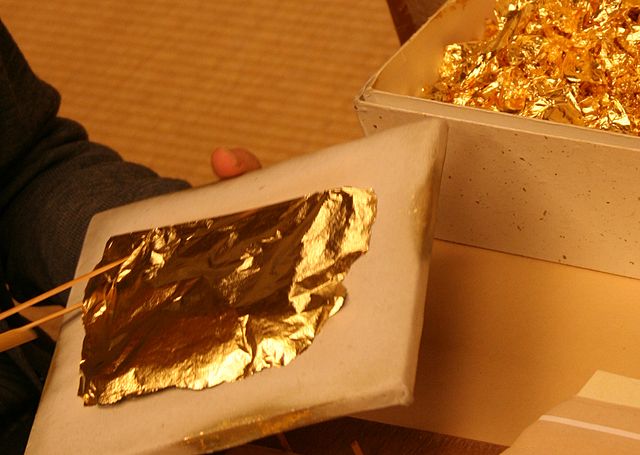 The Egyptians believed gold to be a divine material which held magical powers. Electrum is an alloy of gold which is approximately 80% gold mixed with 20% silver. An alloy is a mixture of metals or a mixture of a metal with small amounts of non-metals. We will discuss metal alloys in more detail in the next lesson. In the next section, we will discuss Egyptian copper processing.

There is currently 1 user online.