Geoengineering is the intentional manipulation of our environment at the global scale. Anthropogenic impacts on our climate thus far do not qualify as geoengineering, because their intent was not to change our climate —climate change was an unintended consequence of the burning of fossil fuels (and the production of sulphate aerosol and, to a lesser extent, changes in land surface properties resulting from human actions).

Geoengineering, at this point, is still only a theoretical construct. But it is increasingly discussed as one of the possible means of mitigating climate change. The idea, at least in principle, is rather simple. It involves engaging in planetary-scale manipulation of the Earth in such a way as to offset the warming impacts of increasing greenhouse gas concentrations.

A variety of geoengineering schemes have been proposed, or at least envisioned. Some involve relatively minimal manipulation or tampering with the environment. For example, carbon capture and sequestration (CCS) involves capturing CO2 from emissions before they enter the atmosphere; while air capture amounts, in essence, to trying to "put the genie back in the bottle", i.e., to actively take carbon out of the atmosphere through, e.g., reforestation or building the equivalent of artificial trees that suck carbon out of the atmosphere more efficiently than natural trees. In all of these cases, the captured carbon must be buried underground or in the deep ocean, where it is isolated from the atmosphere, at least for some time. Other ideas involve fertilizing the ocean by adding iron, which is a limiting nutrient for marine phytoplankton in otherwise very highly productive regions of the oceans, such as the North Atlantic. In principle, this would enhance biological productivity and, therefore, lead to increased uptake of atmospheric CO2 by the upper ocean.

Other schemes attempt to offset the surface warming influence of greenhouse gas increases by reducing the amount of solar radiation impinging on the Earth's surface— so-called solar radiation management. One such scheme involves mimicking the cooling effect of volcanic eruptions by shooting sulphate aerosols into the stratosphere (see, e.g., this review at the site RealClimate). Another scheme involves placing large numbers of reflecting mirrors in space at a stable position in the Earth's orbit. Related schemes involve increasing the Earth's surface albedo by various means (a possibility we also investigated in Problem Set #3).

We will discuss various of the proposed schemes and their relative advantages and disadvantages in more detail over the course of this lesson. 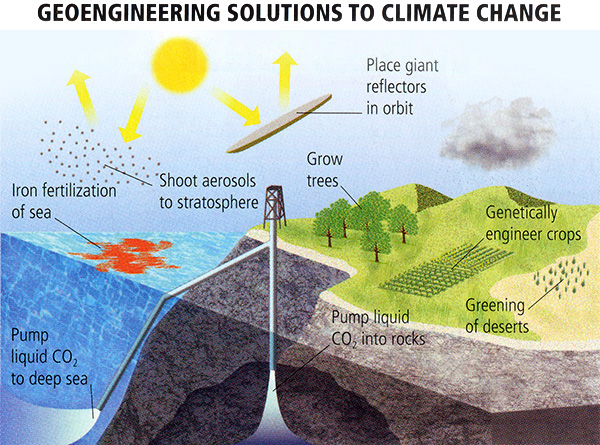