What Could Possibly Go Wrong?

We have already seen the answer to this question to some extent, but let us investigate the potential downside of geoengineering in a bit more detail.

Alan Robock is a leading climate scientist from Rutgers University. Over the past few years, he has been involved in some of the most innovative scientific work examining both the efficacy and potential pitfalls of geoengineering. You may also recognize him as the author of one of your assigned readings for this lesson, "20 reasons why geoengineering may be a bad idea" (published in the Bulletin of the Atomic Scientists). 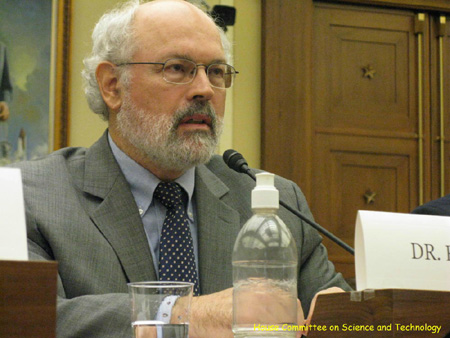 Robock primarily focuses on effects of the stratospheric sulphate aerosol solar modification scheme. The key pitfalls in the scheme are as follows.

Stratospheric sulphate aerosol injection will not uniformly offset global warming, but will cool some regions while warming others. The same changes in atmospheric circulation responsible for this heterogeneous pattern of temperature change will lead to an overall drying of the continents.

Increasing stratospheric sulphate aerosols are likely to increase the rate of ozone-destroying reactions in the stratosphere.

It is possible that sulphate aerosols distributed in the lower stratosphere could sink into the upper troposphere, where they might have the unintended impact of seeding cirrus clouds. As we saw earlier in the course, cirrus clouds may have a net warming influence on the surface since their greenhouse radiative properties tend to outweigh their albedo impact in the net radiative forcing.

As discussed previously in the case of sulphate aerosol geoengineering, any of the solar management schemes suffer the danger that if they are discontinued suddenly for any reason (war, economic crises, human error, sabotage by other nations who view geoengineering as unfavorable to their climate), the greenhouse warming that had been "covered up" by the geoengineering scheme, would emerge suddenly, giving rise to sudden warming, and sudden alterations in wind and precipitation patterns that would be hugely disruptive to civilization and natural ecosystems.

To the extent that geoengineering is used as a crutch to allow continued carbon emissions that would otherwise lead to dangerous influence on the climate, we quickly become "addicted" to the fix of geoengineering. Because our commitment to sustained, long-term elevation of greenhouse gas concentrations becomes increasingly great, we cannot go back. A large fraction of the emitted CO2 will remain in the atmosphere for many centuries, and the only way to avoid realizing the warming impact of the higher CO2 levels is to faithfully continue with geoengineering for perpetuity. Indeed, as CO2 levels continue to rise further, the geoengineering "dose" must get stronger and stronger.

Other than CCS and Air Capture, none of the geoengineering schemes deal with the threat of ocean acidification (while oceanic CO2 fertilization might stabilize atmospheric CO2, it could increase CO2 concentrations in the upper ocean, and thus might not prevent ocean acidification).  We have seen that ocean acidification is one of the greatest environmental threats posed by increasing CO2—indeed, it is sometimes referred to as the "other CO2 problem".  Any geoengineering solution that does not deal with this problem is, at best, a very incomplete solution.

For every potential we come up with, there are probably several others we have not even thought of yet. Once you begin tampering with a system so complex as the Earth system, of which our understanding is very incomplete, and for which our theoretical models are still relatively crude, there is the potential for surprises. And it is unlikely that those surprises will weigh in our favor.

So, finally, where does this put us? If we conclude that the risks of geoengineering are not worth taking, what options does that leave us for mitigation? That is indeed the subject of our next, and final lesson of the course.