There are many engineering Thermodynamics concepts in this equation which are out-of-scope for this course; however, we can illustrate the application of Bernoulli’s Equation in the context of flow through tubing with Figure 6.04. 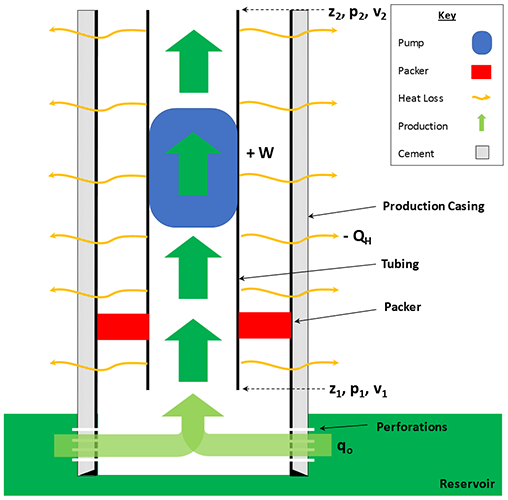 In Figure 6.04, we have a length of vertical tubing defined from a depth of to a depth of with an inner diameter of . A mass of oil enters the tubing at at a volumetric rate of (ft3/sec) at a pressure of and a velocity of . As the oil travels up from the reservoir, the surrounding rock is cooler than the oil due to the local geothermal gradient, and heat is lost () from the hot oil to the surrounding cooler rock. Flowing upward, the oil encounters a downhole pump which supplies work () to the system. The oil finally reaches point in the tubing with a Terminal Pressure of and Terminal Velocity of .

Without going into the thermodynamic details, Equation 6.01 can be rewritten in differential form as: 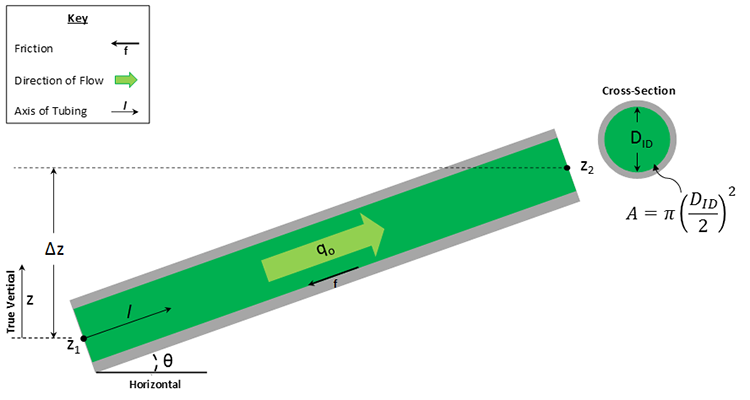 In Equation 6.02, I have neglected the Heat Transfer, , and Work, , terms. If we have significant heat transfer or a device that adds or performs work, we can include these terms into the equation.

Expanding on the terms in Equation 6.02, the elevation term, , is simply the change in the potential energy as the fluid flows through the tubing in the direction of . Note that in the convention shown in Figure 6.05 with the z-direction upward, point has a higher potential energy than point because it has a higher elevation. The friction term, , is the irreversible loss of energy due to friction as the fluid flows past the stationary tubing wall. Friction always acts in the direction of opposite of flow. For single-phase flow, the only friction component occurs at the liquid-tubing interface. In multi-phase flow where phases are flowing at different velocities, there will be a friction component occurring at the phase boundaries also. Finally, the acceleration term, , is the change in energy resulting from the acceleration or deceleration of the fluid going around bends in the tubing. The acceleration term is often neglected in tubing calculations.

The Reynolds Number, , is a dimensionless group that represents the ratio of the inertial forces to the viscous forces within the fluid and is used to characterize laminar and turbulent flow regimes. For our application of flow through pipe, the Reynolds Number is defined by:

Note, Equation 6.04a can be expressed in an equivalent form in terms of flow rate, :

Where the velocity term was replaced with the rate term: .

At lower values of flow is in the laminar flow regime, while at higher values of flow is in the turbulent flow regime. As we see in the Moody Diagram, Figure 6.06, in the turbulent flow regime the friction factor is a function of the Reynolds Number and relative roughness of the pipe . The relative roughness is a dimensionless quantity that is defined as the length of protrusions (lumps, pipe defects and imperfections, pits from corrosion, etc.) divided by the inner diameter of the tubing. It is a measure of the departure of an actual steel pipe from an idealized, smooth pipe. Figure 6.07 illustrates the concepts of absolute and relative roughness, while Table 6.03 shows typical values of the absolute roughness, , for different materials. 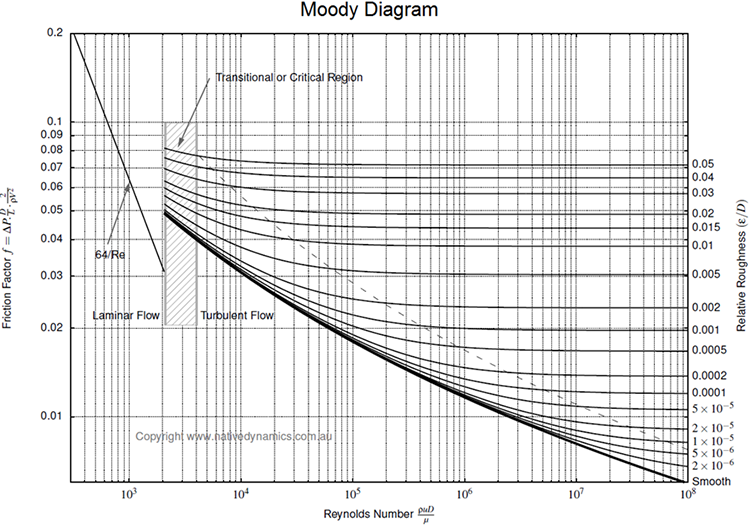 In the laminar flow regime , the Darcy-Weisbach friction factor is a function of the Reynolds Number only and can be determined by: 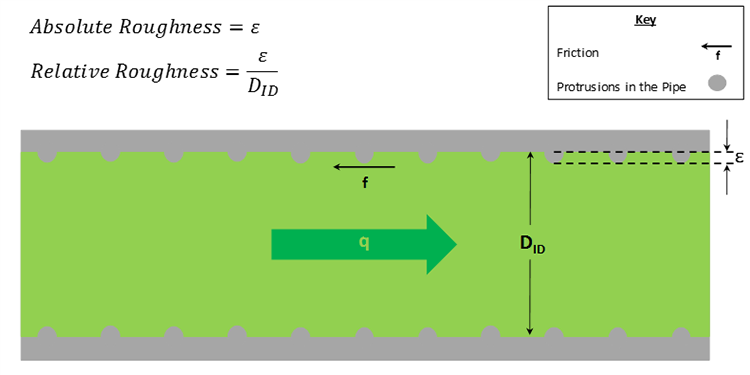 We say that Equation 6.07 is an explicit formula because the friction factor does nor appear on the right-hand side of the equation, and we can solve for it explicitly. The Swamee-Jain Equation[7] is an approximation to the Colebrook Equation[6] and can also be used directly in calculations.

[2] Stokes, George (1851). "On the Effect of the Internal Friction of Fluids on the Motion of Pendulums". Transactions of the Cambridge Philosophical Society. 9: 8–106.

[3] Reynolds, Osborne (1883). "An experimental investigation of the circumstances which determine whether the motion of water shall be direct or sinuous, and of the law of resistance in parallel channels". Philosophical Transactions of the Royal Society. 174 (0): 935–982.