Welcome! My name is Tim Bralower and I will be the instructor for EARTH 103N for Spring 2022. 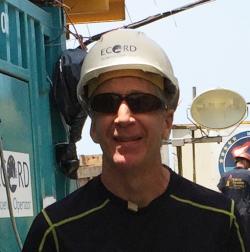 Tim Bralower was born in Armonk, NY but moved to London at the age of four. London in the 1960s often had thick smog due to the use of coal for heating, and Tim remembers his father walking along the side of the car on a foggy night to help his mother steer it through the streets. Tim attended Oxford University and received a BA in Earth Science. Weather was a big factor in his choice of graduate school, so Tim followed his undergraduate degree with a PhD in Earth Science at Scripps Institution of Oceanography at the University of California San Diego. Although a classically trained marine geologist, Tim’s specialty is calcareous nannoplankton, a group of marine plankton that leave an exquisite fossil record. The nannoplankton allow us to tell time or date ancient sediments back to 225 million years ago, and, in addition, inform us about environments in the past. Recently, Tim has focused his research on ancient time periods when climate warmed rapidly. In particular, he is interested in what happens to life during these episodes. The motivation for this research is to predict what will happen in the future as the ocean continues to heat up. He is also interested in mass extinction, in particular, the same event 65 million years ago that led to the demise of the dinosaurs, which almost eradicated the nannoplankton. The extinction and subsequent recovery of life in the ocean give us a worst-case scenario for how modern plankton may respond to drastic environmental change.

Tim started his academic career as an Assistant Professor at Florida International University in Miami before moving to the University of North Carolina at Chapel Hill where he rose through the academic ranks to become Chair of the Department of Geological Sciences. Tim moved to Penn State in 2003 and was Head of the Department of Geosciences for a total of 9.5 years. Tim’s research has taken him for fieldwork in Italy, much of the Western US, the Andes, and four two-month ocean drilling expeditions.