Click here for a transcript of the Carbon Removal video.

Good morning, we're here today at the Susquehanna Shale Hills Critical Zone Observatory. And all around me, processes are removing carbon dioxide from the atmosphere. Above me, in the trees, photosynthesis is occurring, and that process removes CO2 from the atmosphere and converts it to oxygen that we breathe. If it weren't for photosynthesis, the earth would not be habitable. And it's going to be incredibly important moving forward, that we preserve the forests of the world, because of their role in photosynthesis and removal of CO2. There's another process that's going on near me here in Shale Hills, and that process is called weathering. Weathering is a much slower process that includes the breakdown of rocks below the surface by chemicals and bacteria. And the mixture of those breakdown products, with the degradation of organic material that's produced by trees and plants, and the mixture of the degraded organic material and the minerals that are produced by weathering of rocks, produces soil. And you can see a beautiful example of a soil profile right behind me. So, in this module, we're going to learn, in detail, what happens to the CO2 that humans put into the atmosphere and what will happen in the future as we continue to put more CO2 in.

In summer 2019, the Brazilian Amazon rainforest was on fire. By far the largest rainforest on Earth, the Amazon is often called the lungs of the planet for its role in replacing carbon dioxide with oxygen. The fires are a double whammy: The fires are emitting large quantities of CO2 warming the planet, at the same time the removal of forest reduces the long term ability of this vital “scrubber” of CO2 which will lead to warming in the future.

Only ten years ago, there was a global effort to preserve the rainforest, home to a tenth of the world's species, and a vital part of the climate system due to its role in sequestering CO2. This changed with the election of President Jair Bolsonaro in 2019, and his government is now turning a blind eye to logging in the forest combined with burning to make new agricultural land, and the clearing has been focused in indigenous territory.

There were 39,000 wildfires in the Amazon from January through August 2019, a 77% increase over the same time in 2018. Smoke filled the air in cities and the is clearly visible on satellite images. The impact won’t be felt for a while but the scale and significance of the Amazon in the carbon cycle are sure for there to be a serious cost in the future of atmospheric CO2 and warming.  Now the policies will change with the election of President Lula da Silva in 2022 who has vowed to protect the Amazon. 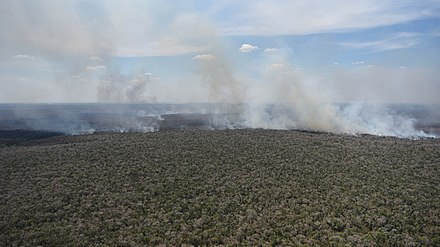 Carbon is unquestionably one of the most important elements on Earth. It is the principal building block for the organic compounds that make up life. Carbon's electron structure gives it a plus 4 charge, which means that it can readily form bonds with itself, leading to a great diversity in the chemical compounds that can be formed around carbon; hence the diversity and complexity of life. Carbon occurs in many other forms and places on Earth; it is a major constituent of limestones, occurring as calcium carbonate; it is dissolved in ocean water and fresh water; and it is present in the atmosphere as carbon dioxide, the second most voluminous greenhouse gas and the trigger for the bulk of current global climate change.

The flow of carbon throughout the biosphere, atmosphere, hydrosphere, and geosphere is one of the most complex, interesting, and important of the global cycles. More than any other global cycle, the carbon cycle challenges us to draw together information from biology, chemistry, oceanography, and geology in order to understand how it works and what causes it to change. The major reservoirs for carbon and the processes that move carbon from reservoir to reservoir are shown in the figure below. You do not need to understand this figure yet, but just appreciate that there are many reservoirs and a lot of exchanges. The carbon cycle is anything but simple! We will discuss these processes in more detail, and then, we will construct and experiment with various renditions of the carbon cycle, but first, we will explore some of the history of carbon cycle studies. 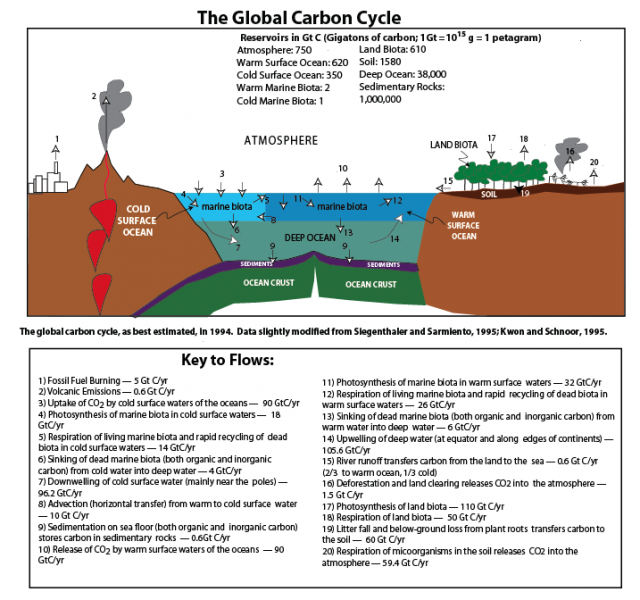 The global carbon cycle is currently the topic of great interest because of its importance in the global climate system and also because human activities are altering the carbon cycle to a significant degree. The potential effects of human activities on the carbon cycle and the implications for climate change were first noticed and studied by the Nobel Prize-winning Swedish chemist, Svante Arrhenius, in 1896. He realized that CO2 in the atmosphere was an important greenhouse gas and that it was a by-product of burning fossil fuels (coal, gas, oil). He even calculated that a doubling of CO2 in the atmosphere would lead to a temperature rise of 4-5°C -- amazingly close to the current estimates obtained with global, 3-D climate models that run on supercomputers. This early recognition of human perturbations to the carbon cycle and the climatic implications did not raise many eyebrows at the time, but humans' "experiment" inputting massive amounts of CO2 to the atmosphere was just beginning then. We will be referring to this "experiment" throughout the module.