Respiration (sometimes called decay) also occurs within the soil, as microorganisms consume the dead plant material. In terms of a chemical formula, this process is the same as described above for plant respiration (the reverse of photosynthesis).

There is an unseen but fascinating universe of microbes living within the soil, and they are the key means by which nutrients such as carbon and nitrogen are cycled through the soil system. A great diversity of microorganisms live in the soil, and they are capable of consuming tremendous quantities of organic material. Much of the organic material added to the litter (the accumulated material at the surface of the soil) or within the root zone each year is almost completely consumed by microbes; thus there is a reservoir of carbon with a very fast turnover time — on the order of 1 to 3 years in many cases. The by-products of this microbial consumption are CO2, H2O, and a variety of other compounds, and are collectively known as humus (not the same as Hummus, the Mediterranean chickpea puree!). Humus is a much less palatable compound, as far as microbes are concerned, and is not decomposed very quickly. After it is produced at shallow levels within the soil, it generally moves downward and accumulates in regions of the soil with high clay content. Part of the reason it accumulates in the lower parts of the soil is that there tends to be less oxygen in that environment, and the lack of oxygen makes it even more difficult for microbes to work on this humus and decompose it further. But eventually, due to various processes (animals burrowing, people plowing, etc.) that stir the soil, this humus moves back up to where there is more oxygen, and then the microbes will eventually destroy the humus and release some more CO2. This humus then constitutes another, longer-lived reservoir of carbon in the soil. Carbon 14 (14C) dates on some of this soil humus give ages of several hundred to a thousand years old. Taken together, the fast and slow decomposition processes, both driven by microbes, lead to an average carbon residence time of around 20 to 30 years for most soils. The data used in our global carbon cycle model lead to a residence time of about 26 years for the global soil carbon reservoir.

These microbes (considered in terms of their respiratory output) are very sensitive to the organic carbon content of the soil as well as the temperature and water content, respiring faster at higher carbon concentrations, higher temperatures and in moister conditions.

In recent years, increasing attention has been directed at permafrost soil carbon since the polar regions are warming much faster than the rest of the globe. Permafrost is soil that has been frozen for at least two years. As the permafrost melts, carbon that was added to these soils by processes like litter fall will become available for soil microbes to respire and release to the atmosphere. In fact, it is almost surely happening already, but given that much of the permafrost is still frozen, we have probably not seen the real manifestation of this source of carbon. Estimates are variable, but a figure like 1000 to 1500 Gt of carbon reflects the current thinking; this is a huge amount of carbon and has the potential to significantly alter the future of atmospheric CO2 levels. As the permafrost begins to melt, some estimates are that it will contribute something in the range of 2-5 Gt C/yr, which is large compared to the human-related changes. Of course, some of this released carbon will be offset by new carbon sequestered into these formerly frozen soils, but initially, the system will not be in equilibrium and these regions can be expected to be a net source of CO2 to our atmosphere. 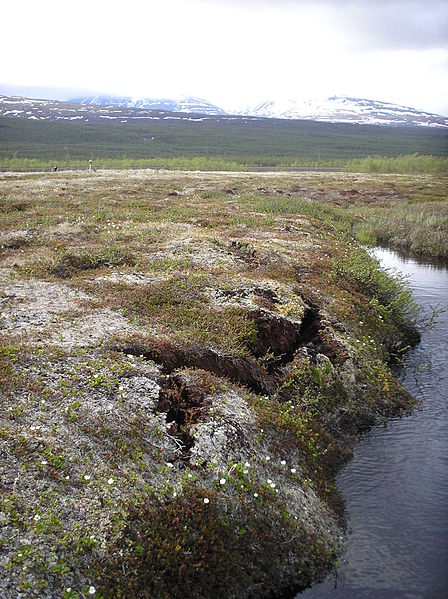 Although most of the carbon loss from the soil reservoir occurs through respiration, some carbon is transported away by water running off over the soil surface. This runoff is eventually transported to the oceans by rivers. The actual magnitude of this flow is a bit uncertain, although it does appear to be quite small. The most recent estimates place it at 0.6 Gt C/yr.

‹ Plant Respiration and Litter Fall up All Together ›