The surface waters of the world’s oceans are home to a great number of organisms that include photosynthesizing phytoplankton at the base of the food chain. These plants (and cyanobacteria) utilize CO2 gas dissolved in seawater and turn it into organic matter, and just like land plants, phytoplankton also respires, returning CO2 to the surface waters.

At the same time, many planktonic organisms extract dissolved carbonate ions from seawater and turn them into CaCO3 (calcium carbonate) shells. When these planktonic organisms die, their soft parts are mainly consumed and decomposed very quickly, before they can settle out into the deeper waters of the oceans. This decomposition thus returns carbon, in the form of CO2, to seawater. 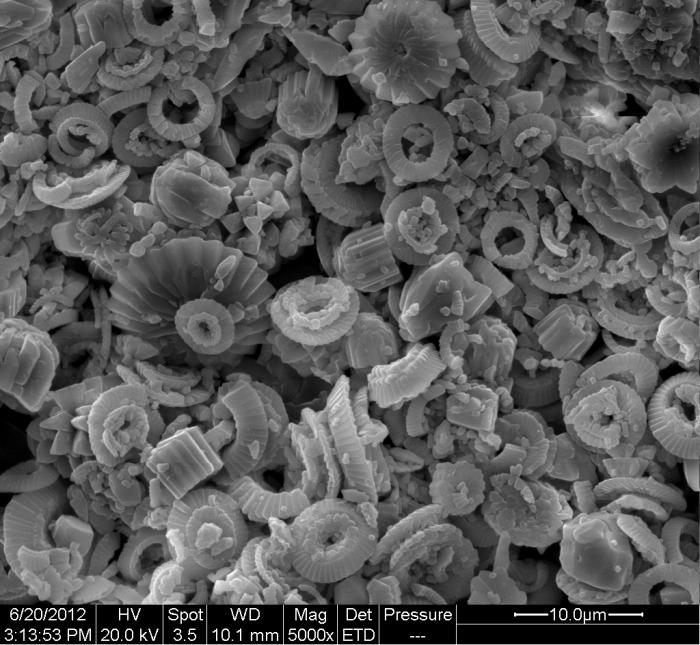 However, some of the organic remains and the inorganic calcium carbonate shells will sink down into the deep oceans, thus transferring carbon from the shallow surface waters into the huge reservoir of the deep oceans. This transfer is often referred to as the biologic pump, and it causes the concentration of CO2 gas, and also DIC in the surface waters to be less than that of the deeper waters. This can be seen in the figure below, which shows the vertical distribution of DIC (and also alkalinity) in a profile view for some of the major regions of the world's oceans. 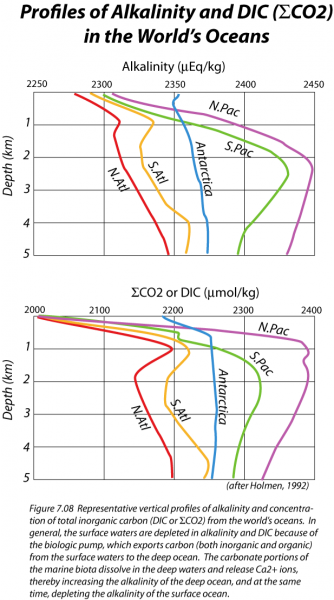 Why is the alkalinity reduced in the surface waters? For the same reason that DIC is depleted. Planktonic organisms make shells of CaCO3, and when these sink to the seafloor, they carry Ca2+ ions with them, thus reducing the alkalinity. Much of this CaCO3 is later dissolved when it reaches deeper parts of the oceans, which explains the higher alkalinity values in the deep waters, as seen in the figure above. By controlling the concentration of CO2 gas dissolved in the surface waters, the planktonic organisms exert a strong influence on the concentration of CO2 in the atmosphere. For instance, if the biologic pump were turned off, atmospheric CO2 would rise to about 500 ppm (relative to the current 408 ppm); if the pump were operating at maximum strength (i.e., complete utilization of nutrients), atmospheric CO2 would drop to a low of 140 ppm. Clearly, this biologic pump is an important process.

Alkalinity is very important, because when it is reduced, species that make shells out of CaCO3 will dissolve. Today, the most sensitive species are those that make shells out of a form of CaCO3 called aragonite which is more susceptible to dissolution than calcite, the other form of CaCO3. Coral is an aragonite group that is very susceptible as we will see in Module 7.

What controls the strength of this biologic pump? The photosynthesizing plankton require nutrients in addition to CO2 in order to thrive; specifically, they require nitrogen and phosphorus. Most of these plants need P, N, and C in a ratio of 1:16:125, and since at present the ratio of P to N in ocean water is about 1:16, both P and N limit the growth of these phytoplankton. Photosynthetic activity of plankton can be mapped out by satellites tuned to record differences in water color due to the presence of chlorophyll. This distribution is shown in the figure below. 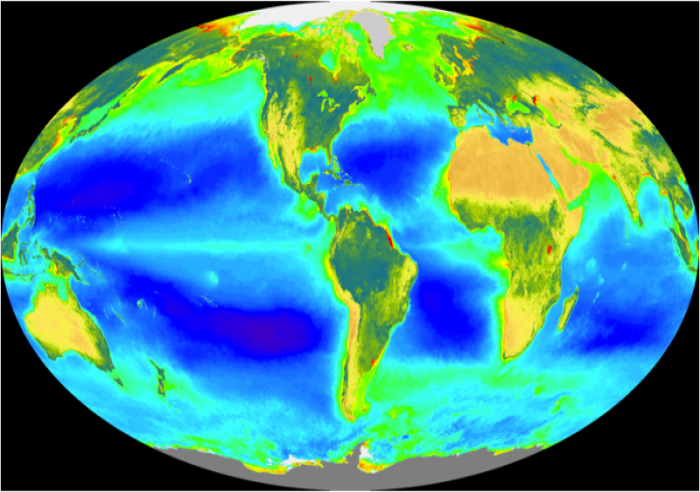 If the nutrients in seawater were being utilized to the maximum extent possible, there would be practically no P and N dissolved in seawater. But in fact, as shown by the figure below, the concentration of P tells us that the biologic pump is not operating at maximum efficiency. In the map below, the purple regions represent regions with no phosphate in the surface water of the oceans, meaning that there is simply a lack of nutrients, or that all the nutrients are utilized. In particular, it is the cold, polar regions that are not utilizing all of the available nutrients. This may be due in part to the temperature, but it may also be related to a paucity of iron, a minor nutrient that is apparently lacking in the colder regions, especially in the Southern Ocean ringing Antarctica. 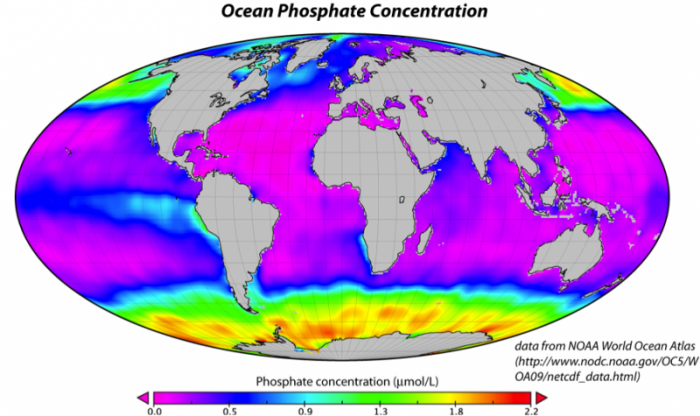 In addition to nutrients, the strength of this biological pump is sensitive to the pH of the ocean water. The organisms in the oceans are adapted to a pH of around 8.3 or 8.4, but as we discussed earlier, if the oceans take up too much CO2 too quickly, the pH will decrease and move it outside the optimum range for the organisms in the oceans. Thus, lower pH levels (i.e., higher acidity) will probably mean a reduction in the strength of the biological pump, which will, in turn, limit the oceans ability to absorb more carbon.

As mentioned above, downwelling (sinking of dense water) transfers cold and/or salty surface waters into the deep interior of the oceans, and as a result, carbon is transferred as well. The magnitude of the flow is thus a function of the volume of water flowing and the average concentration of carbon in the cold surface waters, which is itself a function of the total amount of carbon stored in this reservoir, assuming that the size of the reservoir is not changing appreciably over the few hundred years that this model is intended to be used for.

Downwelling occurs primarily near the poles, where surface waters are strongly cooled by contact with the air. This cooling leads to a density increase. The formation of ice from seawater at the margins of Antarctica increases the salinity of the seawater there, adding to the density of the water. This dense water then sinks and flows through the deep oceans, effectively mixing them on a timescale of about 1000 years or so (the Atlantic Ocean mixes somewhat faster, which helps explain the smaller ΣCO2 and alkalinity gradients seen in the figure above).

Upwelling is just the opposite of downwelling, and as deep waters rise to the surface, they bring with them carbon, nutrients, and alkalinity. The total transfer of carbon is thus a function of the volume of water involved in this flow and the amount of carbon stored in the deep ocean reservoir. Upwelling occurs in areas of the oceans where winds and surface currents diverge, moving the surface waters away from a region; in response, deep waters rise up to fill the "void". Upwelling occurs along the equator, where there is a strong divergence, and also along the margins of some continents, such as the west coast of South America. This upwelling water also brings with it nutrients such as nitrogen and phosphorus, making these waters highly productive.

Note that the amount of carbon transferred by this flow is greater than the downwelling flow. This is not because the volume of flow is different in these two processes, but rather because the concentration of carbon in the deep waters of the ocean is greater than that in the shallow surface waters, due in part to the operation of the biologic pump mentioned above.

Some of the carbon, both organic and inorganic (i.e., calcium carbonate shells) produced by marine biota and transferred to the deep oceans settles out onto the sea floor and accumulates there, eventually forming sedimentary rocks. The magnitude of this flow is small — about 0.6 Gt C/yr — relative to the total amount transferred by sinking from the surface waters — 10 Gt C/yr. The reason for this difference is primarily because the deep waters of the oceans dissolve calcium carbonate shell materials; below about 4 km, the water is so corrosive that virtually no calcium carbonate material can accumulate on the seafloor. In addition, some of the organic carbon is consumed by organisms living in the deep waters and within the sedimentary material lining the sea floor. This consumption results in the release of CO2 into the bottom waters and thus decreases the amount of carbon that is removed from the ocean through this process. It is worth noting that the process of organic carbon consumption on the seafloor is another microbial process and is very similar to the soil respiration flow described earlier. Since the microbes living on the seafloor require oxygen to efficiently accomplish this task, the supply of oxygen to the seafloor by deep currents is an important part of this process.

When sedimentary rocks deposited on oceanic crust are subducted at a trench where two tectonic plates of Earth’s surface converge, they may melt or undergo metamorphism; in either case, the carbon stored in calcium carbonate -- limestone -- is liberated in the form of CO2, which ultimately is released at the surface. The CO2 may come out when a volcano erupts, or it may slowly diffuse out from the interior via hot springs, but in both cases, it represents a transfer of carbon from the reservoir of sedimentary rocks to the atmosphere. The magnitude of this flow is quite small and is adjusted here to a value of 0.6 Gt C/yr in order to create a model in steady state. This flow is defined as a constant in the model, although in reality, it will vary according to the timing of large volcanic eruptions. An extremely large volcanic eruption may emit carbon at a rate of around 0.2 Gt C/yr for a year or two, creating a minor fluctuation.