Overview of the Carbon Cycle from a Systems Perspective

Overview of the Carbon Cycle from a Systems Perspective

The global carbon cycle is a whole system of processes that transfers carbon in various forms through the Earth’s different parts. The carbon that is in the atmosphere in the form of CO2 and CH4 (methane) doesn’t stay in the atmosphere for long — it moves from there to other places and takes different forms. Plants use the CO2 from the atmosphere in photosynthesis to make carbohydrates and other organic molecules, and from there it may return to the atmosphere as CO2 or it may enter the soil as still different compounds that contain carbon. Some carbon is deposited in sedimentary rocks from the oceans, and much later, this carbon may be released to the atmosphere. So, carbon moves around — it flows — from place to place.

What is meant by a systems perspective? It just means that we focus on the places where carbon resides (the reservoirs, in systems terminology), how it moves from reservoir to reservoir, how much of it moves from place to place, and what controls those movements. This same perspective is behind the simple climate model we worked on in Module 3.

First, let’s consider the main reservoirs of carbon. These can be seen in the diagram below, where each box represents a different reservoir, and remember that in each of them, the carbon may be in very different forms. Note a GT or gigaton is a billion metric tons or 1015 grams which is a whole lot of carbon! 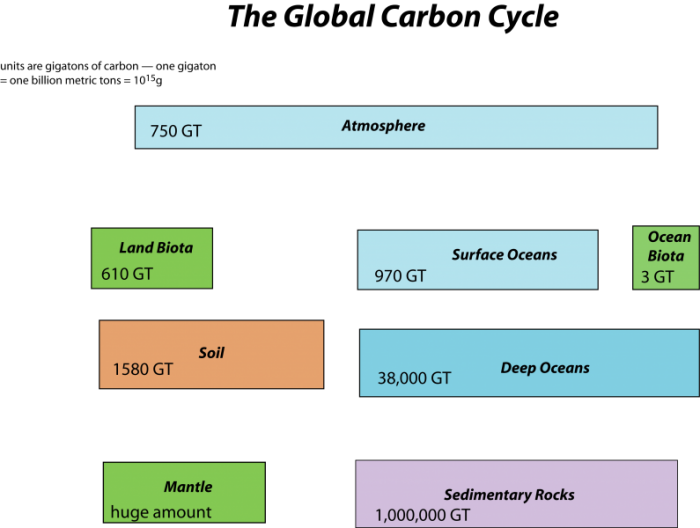 The mantle reservoir is huge and somewhat removed from the other reservoirs, thus we will not really bother with it. Among the other reservoirs, you can see that there is a huge range in the sizes. The ocean biota contain a very small amount of carbon relatively speaking, while sedimentary rocks contain a vast quantity (in the form of calcite — CaCO3 — that forms limestones, and coal, petroleum, etc.).

Now, let’s look at the system with the flows included, as arrows connecting the reservoirs: 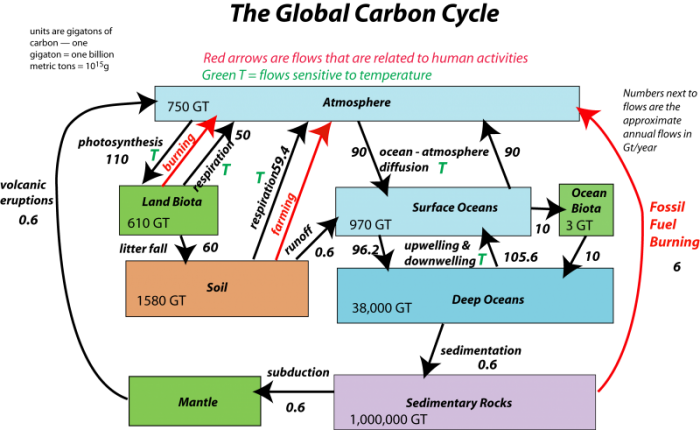 The global carbon cycle showing the different reservoirs for carbon and the exchanges between reservoirs in GT per year
Credit: David Bice © Penn State University is licensed under CC BY-NC-SA 4.0

The black arrows represent natural processes of carbon transfer, while the red arrows represent changes humans are responsible for. The magnitudes of the flows are shown in units of gigatons of carbon per year. The diagram as constructed here represents a steady state if we just consider the black arrows; the flows going into each reservoir are equal to the flows going out of the reservoir — in other words, there is a balance. We will step through this system, talking about the processes involved in the flows, but first, let’s try to learn something from the numbers themselves in this diagram.

First, just a bit more on the notion of steady state. The diagram below illustrates some simple systems, one of which is not in a steady state, and the others of which are. 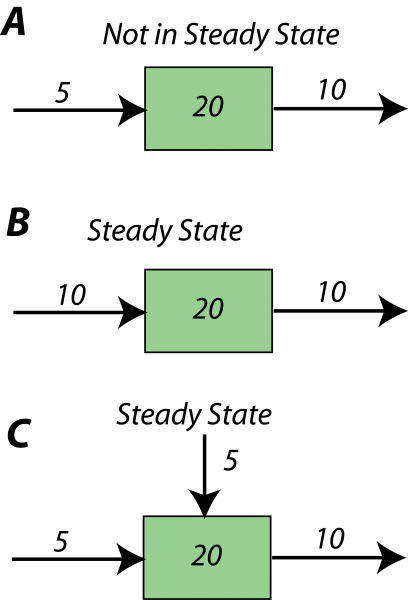 In the first example, A, more (10 units per time) is subtracted from the reservoir than is added (5 units per time), and so over time, the amount in the reservoir will decline — it will not remain constant, or steady. In each time step, it will lose 5 units of whatever the material is. In the other two (B,C), the amount added is the same as the amount subtracted, so these reservoirs will be in a steady state. If you look at example C, you see that the sum of inflows (5+5) is equal to the outflow (10). 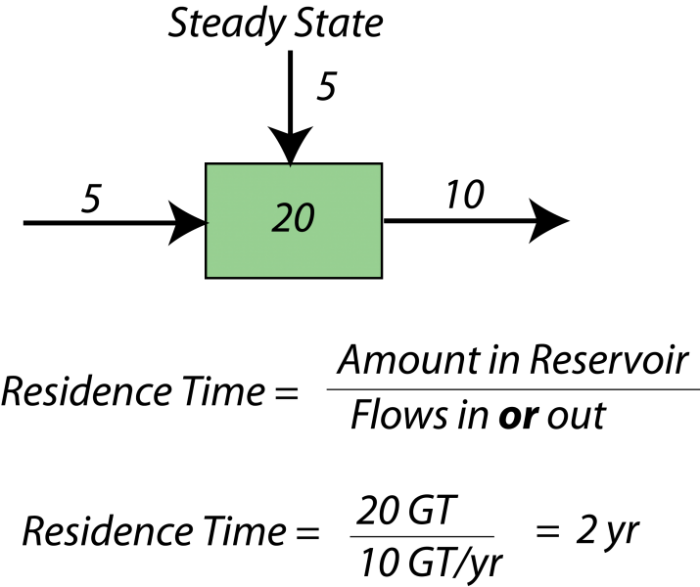 The concept of residence time is a useful one in studying any kind of system because it tells us something about how quickly material is moving through a system, and more important, it tells us how quickly some part of the system, or the system as a whole, can respond to changes. If something has a short residence time, it can respond quickly to changes, whereas if it has a long residence time, it responds very slowly. Mathematically, the residence time is the same as something called the response time which as the name implies, is a measure of how much time it takes for the system to respond to a change. The word "respond" in this context means "return to a steady state."

Although the residence time and the response time are often the same value, they represent different ideas. As we said earlier, the residence time is a measure of the average length of time something spends in a reservoir — like the average length of time a carbon atom spends in the atmosphere. The response time, instead, is a measure of how quickly something returns to steady state after some disturbance that knocks it out of steady state. So, response time is only meaningful in cases where a system has a tendency to remain in a steady state.

Now, let’s turn to the carbon cycle and consider some of the flows in and out of the reservoirs. What is the residence time for the atmosphere? To get this, we take the amount in the reservoir (750 GT) and divide it by the sum of the inflows or the outflows. Let’s take the outflows: 100 GT C/yr for photosynthesis + 90 GT C/yr going into the oceans. The residence time is thus:

This is a pretty short residence time. Now, let’s look at the deep ocean (which is the vast majority of the oceans) — its residence time is:

We use 10 for the inflow/outflow value because we use the net of the water flux into and out of the deep ocean. The result, 3,800 years, is much longer than the atmosphere, and what this means is that the carbon cycle has some parts that respond quickly, but other parts that respond very slowly, and the very slow parts tend to put a damper on how quickly the other parts can change. In other words, if we suddenly inject carbon dioxide into the atmosphere, you might think that the short residence time of the atmosphere means that the excess CO2 can be removed very quickly, but because these reservoirs are linked together, it turns out that the deep ocean must return to its steady state before the atmosphere can get back to its steady state.

‹ Carbon Dioxide Through Time up A Simple Analogy ›