We're going to take a step backwards for a second and think about a much simpler system, but one that has some things in common with the global carbon cycle. First, however, we need to recognize that the natural carbon cycle is something that always varies a bit, but it has some important feedbacks in it that tend to make it stable or steady. And then, along come humans, burning an impressive amount of fossil fuel and creating a new flow in the carbon cycle. To get a sense of how a system with a tendency to remain in a steady state might respond to a new flow, we turn to a simpler model.

Our simple model is a water tub with a drain and two faucets.

STELLA model diagram of a water tub filled by a "natural" faucet and an "extra" faucet, which could be considered to represent humans altering a natural system. Water is removed by a drain, whose rate is dependent on how much water is in the tub (more water in the tub means that more water leaves through the drain. The converter k is the rate constant for the drain, equivalent to a percentage of the total water in the tub.
Credit: David Bice © Penn State University is licensed under CC BY-NC-SA 4.0

One faucet represents the natural addition of water to the tub, while the other represents a new flow. The tub has a drain in it and it takes out 10% of the water in a given time interval (the value of k is 0.1 and the drain flow is just the amount in the tub times k). When you first open the model, the extra faucet is set to zero, and if you run the model you will see that it is in a steady state — the faucet and drain are equal, so the amount in the reservoir remains constant. What happens to the system if you increase the faucet flow using the upper knob to the right of the graph? If the faucet flow increases, then at first it will be greater than the drain and the amount in the tub will increase; but as faucet flow increases, so will the drain flow, and it will eventually become equal to the faucet flow and the system will return to steady state, but one with more water in the tub. Give it a try, and see what happens. At steady state, you can write a simple equation that says:

It turns out that the response time for this system is just 1/k. In this example model, k = 0.1 so the response time is 10 time units (the units depend on how the flows are given — liters per second or minute). This response time is not the length of time required for the system to get into a steady state — it is the time required to accomplish 63%, or the change to the new steady state. Why 63%? There is some math behind this choice, but in essence, it is just a convention that helps us avoid the problem of picking the time when steady state is achieved, which is difficult since it does so asymptotically. The figure below shows how this looks. In the graphs below, the blue line for the water tub is hidden beneath the red curve of the drain — these have different scales on the left hand side, but they are the same exact shape, so one plots over the other. 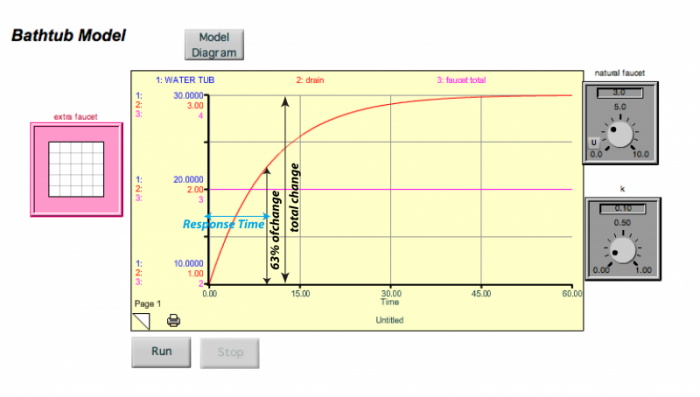 This graph shows the model results from a case where the initial amount of water in the tub was 10 liters and the faucet rate was 3 liters per time unit. The initial drain flow rate is just 10% of the starting amount of water -- 1 liter per time unit -- so the amount of water in the tub increases until it reaches 30 liters, at which point the drain flow rate is 3 liters per time unit, the same as the faucet rate. When the faucet (inflow) rate is equal to the drain (outflow) rate, the system is in a steady state. The figure also shows how the response time is defined for this kind of a system that evolves into a steady state.
Credit: David Bice © Penn State University is licensed under CC BY-NC-SA 4.0

I changed the faucet here to 3, and the water in the tub rose until it reached a value of 30, where the drain value then became equal to the faucet value and the system reached a new steady state. As shown by the blue arrow above, this takes 10 time units to accomplish 63% of the change.

So, this is a system that has a negative feedback (the drain) that drives it to a steady state, which means that regardless of the values of the faucet or the drain constant, k, the system will find a steady state. 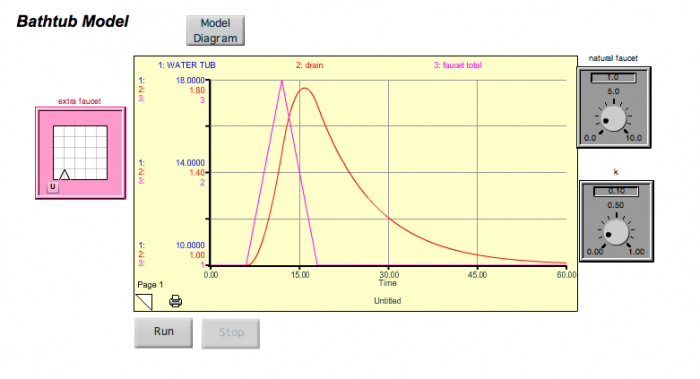 This graph shows the model results from a case where the initial amount of water in the tub was 10 liters and the faucet rate was 1 liter per time unit. The extra faucet is initially zero, but it jumps to 0.8 liters per time unit and then drops back down to zero. The total faucet rate shown in this graph is the sum of the two faucets. The water in the tub spikes a bit later than the faucet rate -- this time difference is called the lag time of the system.
Credit: David Bice © Penn State University is licensed under CC BY-NC-SA 4.0

The system gets thrown out of its steady state temporarily, but returns to the original steady state when the extra faucet is turned back off. Note that there is a lag time here — the water tub peaks about 5 time units after the faucet peaks (this is the sum of the two faucets). If we were to decrease k, then the response time would lengthen, and the lag time would also lengthen. Think of this spike in the extra faucet as being equivalent to a short-term addition of CO2 into the atmosphere. But what if we turn the extra faucet on and then leave it on for some time at a steady rate? This might be equivalent to us adding CO2 to the atmosphere and then keeping those emissions constant (sometimes referred to as the "stabilization" of emissions). We can simulate this scenario with our simple model, and the results are shown below. 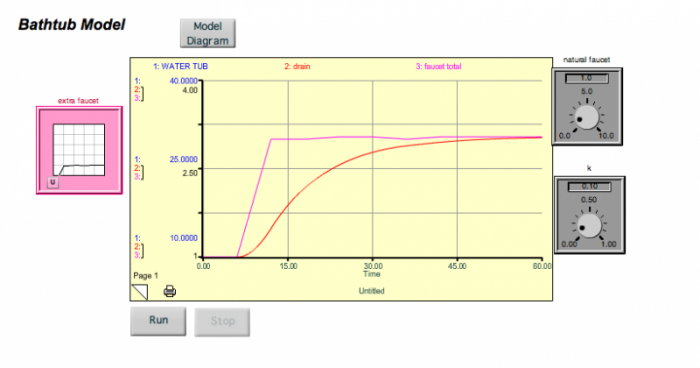 This graph shows the model results from a case where the initial amount of water in the tub was 10 liters and the natural faucet rate was 1 liter per time unit. The extra faucet is initially zero, but it jumps to 2 liters per time unit and then remains at that level. The total faucet rate shown in this graph is the sum of the two faucets. The water in the tub increases slowly until it reaches 30 liters, at which point the drain flow is equal to the sum of the two faucet flows and the system is in a new steady state.
Credit: David Bice © Penn State University is licensed under CC BY-NC-SA 4.0