Carbon dioxide can be dissolved in seawater, just as it can be dissolved in a can of soda. It can also be released from seawater, just as the CO2 from soda can also be released. This transfer of gas back and forth between a liquid and the atmosphere is an extremely important process in the global carbon cycle since the oceans are such an enormous reservoir with the potential to store and release significant quantities of CO2. 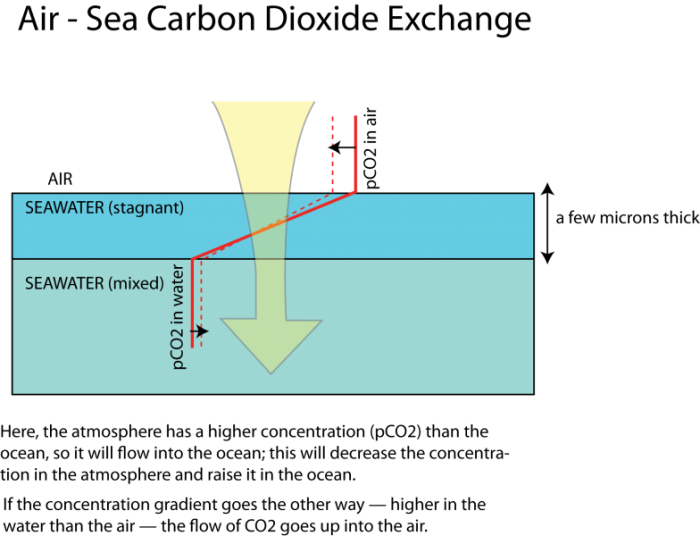 Air-Sea CO2 Exchange
Click here to see a text description.
The air-sea carbon exchange is depicted in this diagram of the air, stagnant seawater (a few microns thick), and mixed seawater. It shows how carbon dioxide moves from the air to the water. A text description says: Here, the atmosphere has a higher concentration (pCO2) than the ocean, so it will flow into the ocean; this will decrease the concentration in the atmosphere and raise it in the ocean. If the concentration gradient goes the other way–higher in the water than the air–the flow of CO2 goes up into the air.
Credit: David Bice © Penn State University is licensed under CC BY-NC-SA 4.0

As depicted in the figure above, the concentrations in the air and the sea are relatively constant (spatially, not temporally) since these two media undergo rapid and turbulent mixing that would tend to even out any systematic variations. The exception to this is a thin layer of water, just 20 to 40 microns thick (a micron is one thousandth of a millimeter), which, because of the surface tension of the water, is unable to mix well. This stagnant film is the barrier across which the diffusion has to occur. The rate of gas transfer is a function of the concentration difference and the thickness of the stagnant film of water (which thins when the winds are strong).

When CO2 from the atmosphere comes into contact with seawater, it can become dissolved into the water where it undergoes chemical reactions to form a series of products, as described in the following: 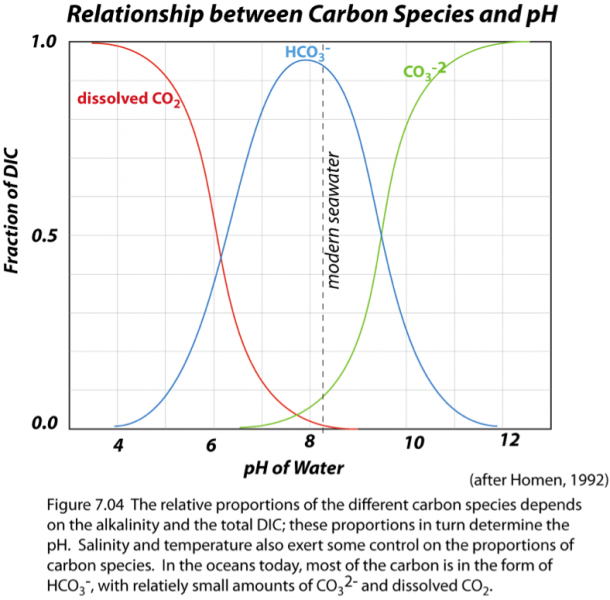 In the above equations (1-3), the double-headed arrows mean that the reactions can go in both directions, and generally do, until some balance of the different compounds is achieved -- a chemical equilibrium.

Notice that in the equations above, the hydrogen ion appears in a number of places — the concentration of H+ in seawater is what determines the pH of the water, or in other words, its acidity. Remember that low pH means more acidic conditions. It turns out that the ratio of bicarbonate (HCO3) to carbonate (CO3) is proportional to the pH; at lower pH conditions, more of the carbon is in the form of bicarbonate than carbonate, and the result is that the fraction of dissolved CO2 gas also goes up, and this tends to cause CO2 gas to move from the seawater into the atmosphere. As we will see in Module 7, higher acidity (lower pH) also has important implications for organisms that live in the sea.

Obviously, the ratio of these two forms of carbon is important, so we need to ask what controls this. Without getting into the chemistry too much, the ratio depends on two main things, and it depends on these things because they determine the electrical charge balance in the water — the charges from all the positive and negative ions dissolved in the water have to add up to zero, and you can see that if you have more carbonate (minus 2 charge) than bicarbonate (minus 1 charge), you have more total negative charge. So, the 2 important factors here are:

Let’s return now to the figure that showed the exchange of CO2 between the atmosphere and ocean and the question about why the ocean’s CO2 concentration changed less than the atmosphere. The reason for this is the carbon chemistry reactions that shift some of the CO2 dissolved gas into the forms of bicarbonate and carbonate — this reduces the amount of carbon in the form of dissolved CO2 gas, so the concentration of dissolved CO2 does not increase as much as it would if these reactions did not take place.

As you can see, the chemistry of carbon in seawater is relatively complex, but it turns out to be extremely important in governing the way the global carbon cycle operates and explains why the oceans can swallow up so much atmospheric CO2 without having their own CO2 concentrations rise very much.

Let's see if we can summarize this carbonate chemistry — it is important to have a good grasp of this if we are to understand how the global carbon cycle works.

In the real world, there are important variations in the gas transfer between the ocean and atmosphere. This can be seen in the figure below, which represents a kind of snapshot of this transfer across the globe. The units here are grams of C per m2 per year, and each box is about 1e6 m2. The red, orange, and yellow colors represent places where the oceans are giving up CO2 to the atmosphere; the blue and purple areas are places where the oceans are sucking up atmospheric CO2. Summing these up, we find that the oceans are taking up around 92-93 Gt C/yr and they are releasing about 90 Gt C/yr — for a net flow of 2-3 Gt C/yr into the oceans — this represents something like 25-30% of the carbon we are adding to the atmosphere by burning fossil fuels. This exchange is variable in space and time, but a few general features can be pointed out. In general, the colder parts of the oceans absorb CO2 and the warmer parts release CO2 into the atmosphere. This makes sense because CO2 is more soluble in colder water. 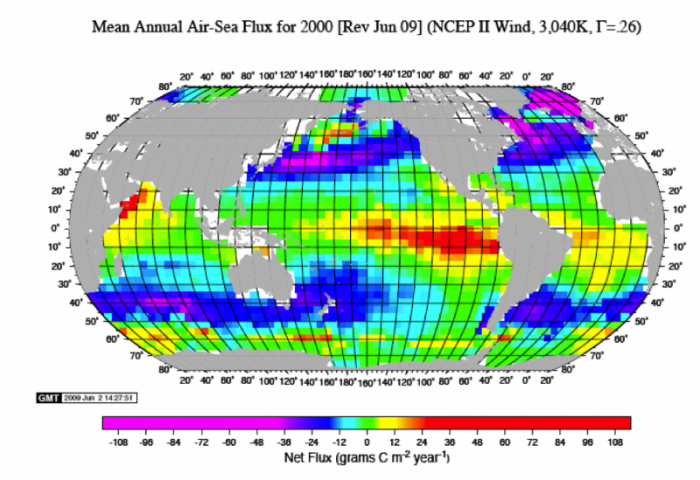