So by 2100, the ocean level will be at the base of these dunes. And superimpose on that a hurricane with a storm surge of about 15 feet, and that will take the ocean right into those condos that are right behind me there.

So that's why folks up and down the East Coast and elsewhere around the world are very concerned about sea level rise moving into this century. We'll be learning a lot more about that in this module, and I hope you enjoy it very much.

Superstorm Sandy came ashore in New Jersey on October 29th, 2012. The storm caused 109 fatalities in the US and more than $71 billion in damage and lost business income. The destruction caused by a combination of wind, flooding, and storm surge was focused in New Jersey and New York City. An extremely large area hundreds of kilometers across received extensive damage. Half of the city of Hoboken flooded, a 50-ft segment of the Atlantic City boardwalk washed away and hundreds of beachfront properties all over the New Jersey shore were damaged or destroyed. In New York City, the East River flooded its banks in lower Manhattan and the subway system suffered its worst flooding in history. A storm surge of almost 14ft flooded Battery Park and a 16ft surge hit Staten Island, where damage and casualties were particularly severe. However, lost in the discussion about the causes and impacts of the storm is this: scientists have known for a long time that the New York City region is very vulnerable to storm damage.

Sandy has reinvigorated the debate about hurricanes and climate change (see Module 3). Remember, climate change is supposed to result in larger storms, not necessarily more frequent storms, although there is still a lack of agreement among scientists in this forecast. The basic problem is that unlike temperature and precipitation, where we have massive amounts of data to see trends, run models and make projections, we have very few large storms to accurately forecast. Nevertheless, the amount of heat in the North Atlantic Ocean in October 2012, is a strong, if not irrefutable argument for a relationship between Sandy and climate change. And the interaction between a hurricane very late in the season for the northeast coast and a cold front more typical of that time of year was what made Sandy so large and so deadly as well as steering indirectly towards the coast. The discussion about Sandy and climate change is bound to continue for a long time. However, we know for certain that global sea level is 1.5 ft higher than when New York City was hit by a storm of comparable size in 1821, the massive Norfolk and Long Island Hurricane, and that extra foot plus made a huge difference in Lower Manhattan.

Ten percent of the world's population, or approximately 600 million people, live on land that is within 10 meters of sea level. This low elevation coastal zone includes some of the world's most populous cities besides New York, including London, Miami, Calcutta, Tokyo, and Cairo. In the US, the situation is most dire in New Orleans where a large portion of the city lies below sea level making the city highly vulnerable to storms such as Hurricane Katrina. New Orleans is in an especially precarious positions because the land on which it is built is subsiding rapidly, at a rate far faster than modern sea level rise, as a result of the development of marshlands, and major decisions will need to be made in the future on whether to keep investing in infrastructure to keep the seas out or whether to retreat from low-lying areas. Such investment has already been made in the Netherlands where a massive system of flood protection has been developed to keep the oceans at bay. However, tiny island nations in the Pacific and Indian Oceans that are within a meter's elevation of sea level do not have the resources available to protect the land from rising seas, and these nations are grappling with the distinct possibility that they will be completely submerged by the middle part of the century.

Flooding Around the World 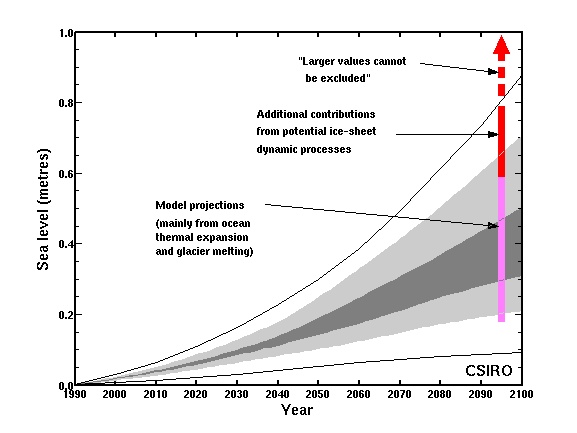 Average global sea level has risen about 17 cm since 1900 with considerable variability from place to place. The average global rate of sea level rise is about 3 mm per year, but in parts of the western Pacific, this rate is closer to 1cm per year. New techniques enable extremely precise measurements of sea level, and this has allowed geoscientists to determine the vulnerability of different places to future sea level rise. As we have observed in Module 2, the large ice sheets of the world are melting at rapid rates. In fact, the Intergovernmental Panel on Climate Change predicts that sea level will rise by up to an additional 0.6 m by the year 2100 (see adjacent plot), although a great deal of uncertainty is associated with the unpredictability of ice sheet behavior combined with different emissions scenarios and warming trends.

In fact, if we go back 125,000 years before present to the last interglacial period, much of Greenland was ice-free and sea level was 4-6 meters above present. However, this amount is dwarfed by the sea level changes that have taken place in deep geologic time. For example, about 90 million years ago, sea level was hundreds of meters higher than today, and the ocean extended across the North American continent connecting the Gulf of Mexico to the Arctic Ocean.

The stakes are huge. Recent data suggests that the melting of the Greenland Ice sheet is accelerating. Imagine the consequences of this process should it continue for decades to come. Just one number should make the point clearly. A seawall which is being discussed to protect New York City and parts of New Jersey from future Sandys will cost about $23 billion. Imagine what it would cost to protect Boston, Philadelphia, Washington DC, Miami, Houston, Los Angeles, and San Francisco!