Scientists are increasingly concerned about one massive glacier, the Thwaites glacier on the edge of the West Antarctic Ice Sheet. Satellite images show that the Florida-sized glacier is rapidly becoming destabilized with giant cracks criss-crossing its surface. These features suggest that collapse could happen within the next decade. A large part of the Thwaites glacier on its eastern side is held back by a giant ice shelf which is the part of the glacier floating on the ocean surface. The ice shelf acts as a brace or a buttress holding the giant ice sheet back and keeping it from disintegrating. The ice shelf is being heated from below by the warming ocean and scientists have recently noticed cracks and crevasses which signify that it is thinning. Moreover these features allow warm water to attack further inside the glacier accelerating its melting. At some stage the ice shelf will break up, a phenomenon that is happening in numerous places along the edge of Antarctica. This will cause the Thwaites glacier to rapidly collapse into the ocean. Estimates are that this collapse would cause a 65 cm rise in global sea levels over a few years. Remember that sea levels are currently rising by millimeters per year and have risen by 20 cm since 1900 so this sudden rise would be unprecedented and catastrophic for low-lying cities such as New York, Miami, Mumbai and Shanghai.

Melting of the Thwaites glacier already accounts for about 10% of global sea level rise.  The glacier itself is also being attacked by warm water along its base. The ice grounding line, which is where the edge of the base of the ice sheet runs across bare continental rock, is being melted by warm waters pumped under the ice shelf by tides. This zone is rugged and chaotic with broken up rock, blocks of ice and warm water mixed in. As it melts an ever thickening stack of ice is exposed to the warm water.

The collapse of the Thwaites glacier could also lead to failure of other nearby ice sheets via a process known as Marine Ice Cliff Instability. This is where rapidly retreating ice sheets that are un-buttressed by ice shelves, expose large, unstable cliffs that readily collapse into the ocean. So the collapse of Thwaites would expose the front of adjoining glaciers to the warming ocean leading in turn to their collapse. Models suggest that the collapse of Thwaites could ultimately lead to the collapse of much of the Western Antarctic Ice Sheet leading to three meters of sea level rise via this process. For this reason, the Thwaites glacier is also known as the “Doomsday Glacier”. The timing of its demise is currently impossible to predict but the signs are that it is beginning to happen and the resulting sea level rise will have a very profound impact on coastal cities around the world. 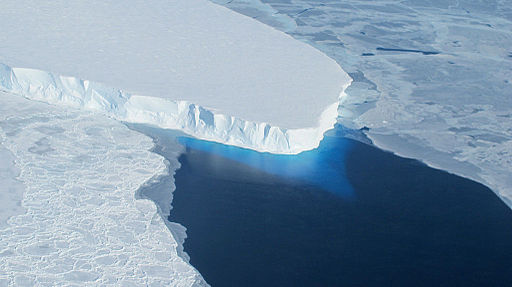 Rolling Stone just published this incredibly frightening piece titled, “The Fuse Has Been Blown. And the Doomsday Glacier is Coming for Us All.” Which, yikes! It's about a huge glacier in the western Antarctic that's the size of the state of Florida. That glacier known as, Weights, is basically holding back enough ice to raise sea level around the world by 10 feet. A new study found that the ice shelf holding that ice in place could be gone in less than a decade. I’m going to quote for you from this new piece, “If the Weights Glacier collapses, it opens the door for the rest of the West Antarctic ice sheet to slide into the sea. Globally, 250 million people live within three feet of high tide lines. 10 feet of sea level rise would be world-bending catastrophe. not only goodbye Miami but goodbye to virtually every low-lying coastal city in the world.”

Jeff Goodall is the author of that piece for rolling stone and he joins me now. Jeff you've been a a great climate reporter for many years. I’ve read your last book about flooding. And, describe for me the finding here. Because there's a little, there's sort of a difference between like the shelf, the glacier is on on the glacier? Is that right? Yeah, there's been a lot of confusion about this. So what was recently been kind of revealed is that the ice shelf that works, it's like a kind of like a fingernail that grows off the glacier itself and is floating in the ocean, is cracking up. They found some major fissures and fractures in that ice shelf. And one of the scientists in this recent study has suggested that that ice shelf could crack up within five years. Which is a very big deal in itself, but that is not what's going to raise sea levels. The ice shelf is already floating. And so, like ice cubes in a glass of water, or something, when the ice keeps melting it doesn't raise the water level.

What the ice shelf does is work as a kind of buttress, kind of holding back of the glacier itself. And, as you said in the intro, Weights is a giant glacier. It's the size of Florida. And once that buttress is gone, there's no telling how long it will take for that for that glacier to begin collapsing. And what's really important to note about Weights that's different than basically every other glacier in the world is that it's not melting like a popsicle on a sidewalk on a hot summer day. You know because of warmer weather. It's melting because the changes in the ocean current temperature, just one or two degrees, that warmer water is getting underneath the ice shelf, and underneath the glacier itself. And the concern is that by melting it from below it will destabilize a lot of the glacier, or most of the glacier, and the whole thing will crumble and fall into the sea. Kind of like dumping a whole like bag of ice into the water at once. And that is a catastrophe.

Right, so you've got this ice shelf that is cracking. And that shelf, what's key about that is it's a key protector for the glacier. It's a buffer zone. It's a shield. The thing that stands between it and the water. And to the extent that that goes away, that reduces the protection the entire glacier has. And now it's being attacked, essentially structurally, by warmer water, and the warmer water is is being driven by climate change. Exactly, exactly. And what's important is that, I mean there's many things that are important about this, but one of the things that's important is that you know it's a great example of how you know we talk about one degree of warming or two degrees of warming, and what the changes that will bring to our world. And of course, we're already seeing them in places like Alaska, like you showed in your intro, and the wildfires in Colorado right now. But what Antarctica really shows is that even tiny changes, literally one degree of change in the water temperature, is enough to destabilize this entire ice sheet. Which has huge consequences for our world.

Yeah and it also speaks to the fact that it's happening. The most extreme places we're seeing, the most extreme manifestations of climate change we're seeing now, is in the North Pole, and are in those places in the world in the Arctic, where the the changes are the most intense. But they have repercussions for all of us that don't live in the Arctic. I mean, that's the other obvious but fundamental thing to get your head around here. Yeah, I mean it's one of the really hard things to communicate about climate change, and about why this crisis is so urgent. Is that it's not just you know, that it's 70 degrees, or 75 degrees today here in Texas where I am. It's not just what we see and feel in real time around us. It's these much larger changes that are happening to our world in places that are very remote from us but have incredible consequences.

I mean, when I was at the Weights Glacier, a couple of years ago I was there on a research vessel. And we went right up to the face of it. And it was this incredible moment of encountering this, sort of, I felt like being on another planet. But it was also, I know from my work as a journalist, that what happens there has a direct impact on Miami Beach real estate, and on the supply chains in Houston, and on the risks of extreme storms in, and flooding on, the Gulf Coast. So, it's making these larger links that is what's so hard to bend your mind around the climate crisis. And why it's so important to pay attention to this stuff.

Yeah, your last book is called, “The Water Will Come.” Is that the last book? Yeah. Yeah, I love that book. I would recommend it to people. It's a really, really good book. We should just also know, you mention the wildfires. There are wildfires right now outside Boulder. In December, I think, there’s including, I believe, if I’m not mistaken, a hospital, or at least been evacuated or threatened by these December wildfires. Which is obviously unheard of and unnatural and another indicator of how awry things have already gone, and how much worse they will get if we don't do everything we can.

Jeff Goodall, great reporting. Many thanks. Thank you for having me, Chris. So that does it for all in this year. I would just say, if you're about to go into this new year mourning someone that you lost this year, I wanted to offer my condolences. And, I tell you that a lot of people are thinking about people they lost this year, people that got sick this year, hardships they went through. And, I hope everyone can be as kind to each other as possible. Show each other grace in this new year, and struggle together for a better world.

Credit: MSNBC
‹ Processes that Cause Sea Level to Rise up Sea Level: Measurement and Recent Trends ›