One of the most vulnerable places for sea level rise in the US if not the world is Miami and more specifically Miami Beach which lies on a fragile barrier island along the coast. Miami has a booming tourism and real estate industry and Miami Beach and other beachside communities house some of the most luxurious developments in the country. According to Zillow, Miami contains 26 percent of homes at risk of rising seas. Sea level in the area is rising at a rapid rate with six inches of rise expected by 2030 and up to six feet by 2100. This is threatening everything. Six feet of rise would leave much of Miami Beach (and the Greater Miami area) underwater. Even six inches could be more damaging during hurricanes with storms surge pushing further inland and causing more destruction, but six feet would be truly devastating during these events. Left unchecked the city could lose its thriving economy and be faced with massive damages from the rising waters within a couple of decades.

The last decade in Miami Beach has seen a dramatic increase in “sunny day” flooding events which generally occur at monthly high tides, and some more drastic “king tide” flooding during the highest tides of the year. All of these events have led to flooded streets and parking lots. Rising seas also threaten Miami’s drinking water as salt water is beginning to seep into the city’s aquifer threatening its water supply (the salt water incursion issue discussed in Module 8). Sea level rise also has the potential to destroy many of the city’s septic systems. 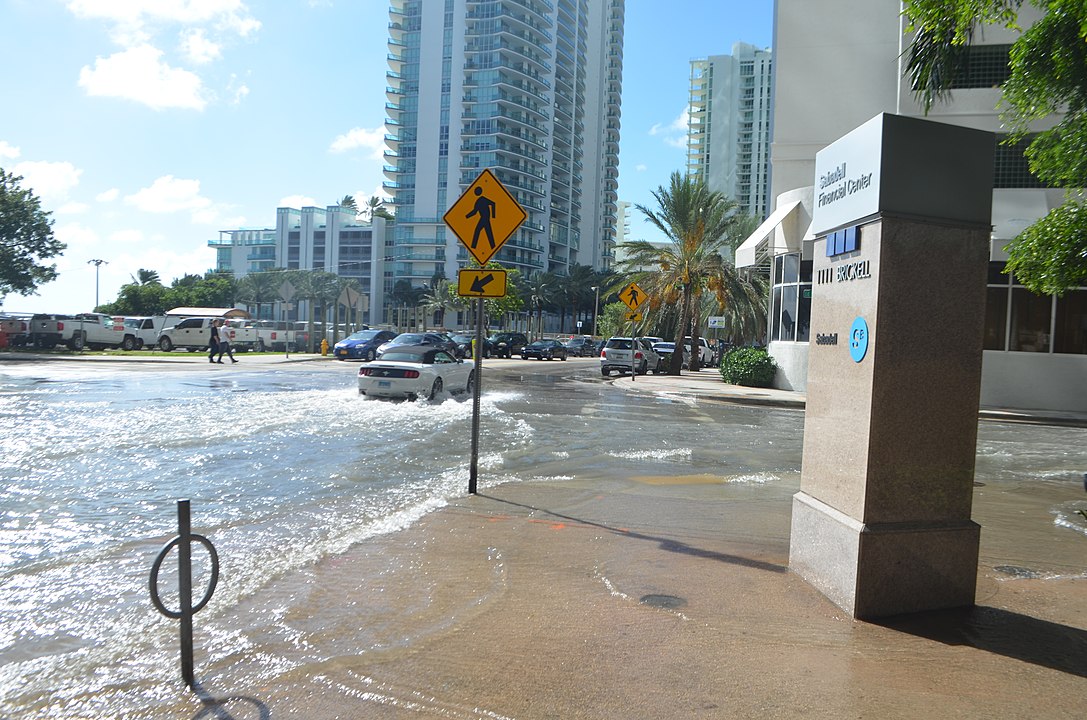 October 17, 2016 tidal flooding on a sunny day, during the "king tides" in Brickell, Miami that peaked at 4 ft MLLW.
Credit: Image by B137 from Wikipedia, licensed under CC BY-SA 4.0 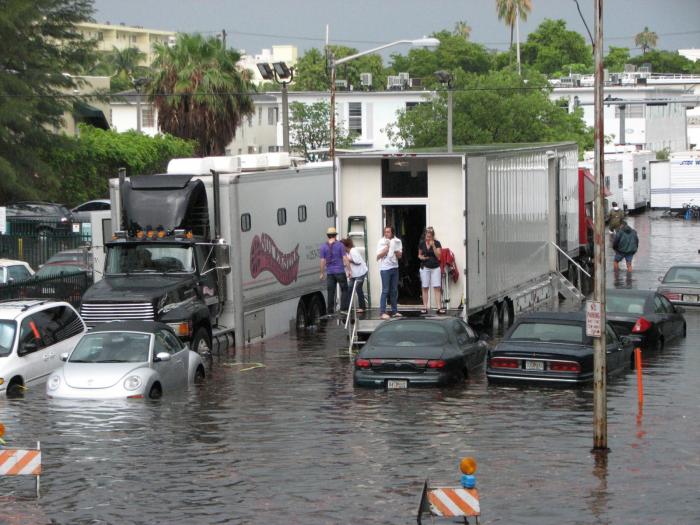 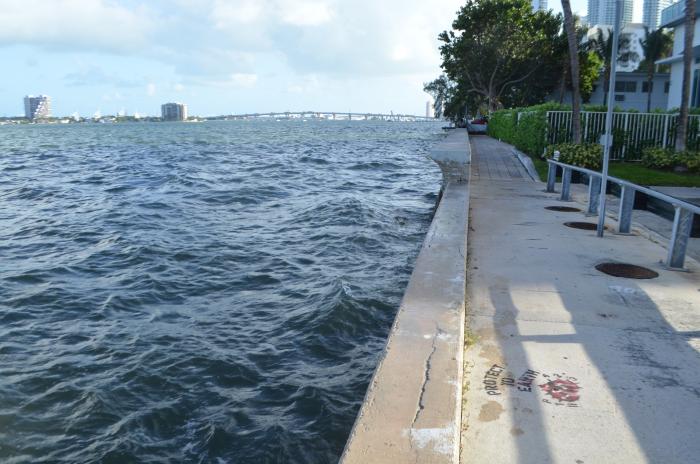 Faced with these threats, the city managers have taken on extremely proactive measures to stave off the rising seas and give the city a future. The city has raised taxes and employed some of the top coastal engineers to design systems to hold back the rising ocean. These systems include elevating the roads and building walls to protect key structures. Powerful pumps are being installed to drain water away during the king and sunny day high tides. Valves are being placed in drinking water systems to keep salt water out of the drinking water supply.

All of these measures are designed to ensure that the city stays vibrant well into the future even when the rate of sea level rise increases.

Flooding emergency along coastal cities today in South Florida, as rising tides are leading to flooded streets. Another night of tidal flooding in Miami. Florida reportedly has the most number of big cities at risk from rising sea levels. Scientific models predict most of Miami Beach could be under water by the end of the century.

I think that in every generation there's going to be a big cause. There's going to be a challenge, or a war. I think today we have sea level rise and climate change. [NOAA predicts the global sea level could rise up to 6.6 feet by 2100. The City of Miami Beach has taken unprecedented measures to protect itself.] This street… Okay, perfect. …and you know like the better spots… Perfect, it's important. We have to have these everywhere, because… I'm on top of this… Go ahead. The more we communicate with the people, the better they understand what we're doing. That's the whole point. Because we are rising above. Yes. Thank you. Yeah. Thank you.

So, what was going on, and people were seeing it more and more, we were having what's called sunny day flooding. Can you imagine? It's a beautiful sunny day on Miami Beach, which we have many of, and all of a sudden in certain streets we would see water coming up through our drains. So the streets would actually become flooded, which is very unnerving to the residents, to the tourists. It's been happening over a period of many years, but it seems over the last three, four, five, six, seven years it's gotten worse, and it's gotten faster. We had areas where cars got underwater a bit, where it went into the bottom of the cars and ruined cars. The big challenge we have is that you know, in a city like Miami Beach, there are certain roads that are city roads, and there are certain roads that are state roads. So, for example, one of the main roads in our city is a state road called, Indian Creek Drive. In this road, underwater, underwater, underwater. But it's not our road, it’s the State of Florida. And the difficulty we're having is convincing the Governor and the Secretary of Transportation that they need to fix their road. But unfortunately, we have an administration in Tallahassee that doesn't believe in sea level rise. We can show them there are fish on the street. Water is coming over, and this road is you know, you can't even go on it. We had to close it down. We were forced to take immediate action. And, of course I didn't realize as a mayor you had to become a hydrologist, but we all kind of learned very quickly. We have found that where we attack, we beat back the water.

Historically, the way the water would leave our city, it would go down the drains and it would go out our sea walls back into the bay. Because the water level has risen so high in the bay, the actual out-falls on the sea walls are under the water level. So, what happens is the water reverses course and comes out our drains onto the street. So, what did we do? Number one, we put on one way flex valves, so now the water goes out, and then the flex valve closes. The water can't return in. The second thing is, is that in order for that water to get out of that one one-way flex valve back into the bay, we had to put in pumps. It's basically taking the water that's coming through our drainage system and pushing it out, opens up the Flex valve, and the water goes back into the bay. Raising our roads - we're literally building on top of our existing roads and making our roads higher. Your roads are higher, they won't get flooded. A third thing of course, is sea walls. If the bay gets too high, it won't go over the seawall. The sea wall will protect the area.

Our current plan is sort of how do we stay relatively dry for the next 30 to 50 years? The real long-term issue now is, how do we create a sustainable community that includes our land use codes? You know, our building codes and materials? Do we need to go to a landscaping plan that deals with more salt-tolerant species? How do we help individual property owners? How do they raise their houses? Or what's the alternative there? Is an insurance company going to ensure that home? Will rates go up? The early focus has been on the engineering solution. Now we’ve got to figure out what's our strategy going forward?

We don't have all the answers. We have a lot of questions still, a lot of questions. Really, what it comes down to of course, is predictions. Do we know really the real predictions? You have someone, say five feet, and three feet, and two feet, and six inches, and I think there's no necessary really true prediction. A lot of people say you know, well, you pump, you're raising streets, you're changing building codes, you're raising sea walls. That's going to last you 30, 40, 50 years and I said you know what? That may be true. But I believe in human innovation, and I believe in entrepreneurship. I believe we're going to have such solutions through innovation. In the next 20-30 years that we're going to be astounded. I think we're going to be able to shoot the water down below, way below the aquifer. I think that we’re going to be able to pull water out of our city. We may need to potentially have you know, little levees going through certain areas to carry water. I'm not sure. But I know that I believe in human innovation. And I know that Miami Beach is not going anywhere. As well as all the world coastal cities.

When you look at this map you realize most of South Florida's fairly low lying. So, you know, a lot of the talk is about Miami Beach. Sea-level rise is going to impact everything here along the coast. It's going to impact the Keys, and certainly you have the Everglades recharging a freshwater brackish water ecosystem. There is no handbook. That's the real challenge we're facing. There is no handbook. No community has really done this. We're sort of at the frontline of it, which is exciting and frightening at the same time.

We show that we can make progress. We show that we have the formula. We know what to do. Now we're going to roll out this program citywide. It's a four hundred-million-dollar program. It's going to take another four or five years. Right now we're shouldering the entire cost ourselves as a city. We really need state help. We need federal help.

Yeah, the flooding is a problem. I think it will be good, because we need to clean this area. Alton Road, it was just a flood every single day. And I got a young daughter and it's like, I'd show her and she's now she points out, look the bridge is filled over with the tide. It's definitely frightening.

Miami Beach is going to be here a hundred years from now. It probably won't look like this. The reality is, we may have to learn to live with a little bit of water like they do in Venice. Like they do in the Netherlands. We may have to do that as well in the long term.

I want to be the mayor of Miami Beach. I don't to be the mayor of Venice. Whether it's Florida, whether it's the United States, we're a part of the expression. We're in all in the same boat. Seas are rising, climate change is a reality, and you can see it right here in Miami Beach, this wonderful, incredible city in Florida, in the United States of America.

Credit: The Atlantic
‹ Mississippi Delta and North Carolina up Venice and Holland ›