In reviewing these sections, you should notice that three common angular symbols keep popping up: the declination (), the local latitude (), and the hour angle (). As we shall again see in the next section, these are three of our key Earth-Sun angles.

We additionally include the use of longitude () in our calculation of time, and in particular, converting time to an angle: the hour angle.

Now, let's convert "time" into an angle, for our future trigonometric relations:

When we convert time to an angular value, we can no longer use a 24 hr format. We need to convert hourly time into a useful angle based on the properties of a sphere, again using spherical trigonometry.

So, I'm sure a lot of you are wondering what we do with the hour angle. Because it's not something that we really ever used before in regular everyday language. But because so many of our mathematical calculations are in terms of angles, remember, angles are coordinates in the solar reference in the solar frame of reference.

So, time is going to be in terms of decimal hours. So time in decimal hours. And we're going to make sure that we do that in a 24-hour time frame so that if I were talking about 1:30 in the morning, I would represent this as 1.5. If I wanted 1:30 in the afternoon, based on the 24-hour system, that would be 13.5. So we have that understood.

So, in order to get the hour angle of time, we're going to start with time is going to be the hour angle times the conversion of one hour per 15 degrees of rotation of the earth. So that's going to give me my decimal hours-- multiplying right there-- such that if I wanted to have the hour angle, I would have time times 15 degrees per one hour. In which case my time is in hours. The units of hours would cancel out. And I'd be left with units of degrees.

Now, one of the things that you're going to find in your problems is the calculation of day length. And if the day length in the textbook is shown by calculating the hour angle of the sunset-- and we do sunset because it's a positive angular value. Basically, if I were to-- here, let me do a quick diagram.

We represent the apparent displacement of the sun away from solar noon, either as a negative or positive angle. An of zero indicates that the sun is at its highest point for that given day.

Another way of looking at it is the angular difference between the local meridian of the observer/collector and the meridian that the beam of the sun is intersecting at a given moment.

Now, the day won't really begin at -180 degrees anywhere between the arctic circles. However, I wanted to emphasize that the day only begins at -90° on two days a year. Those days occur during the Equinox moments in the orbit of the Earth about the Sun, and the length of those days is actually 12 hours long. All other days are either shorter than 12 hours, or longer than 12 hours. As such, they end either less than 90° or greater than 90°. 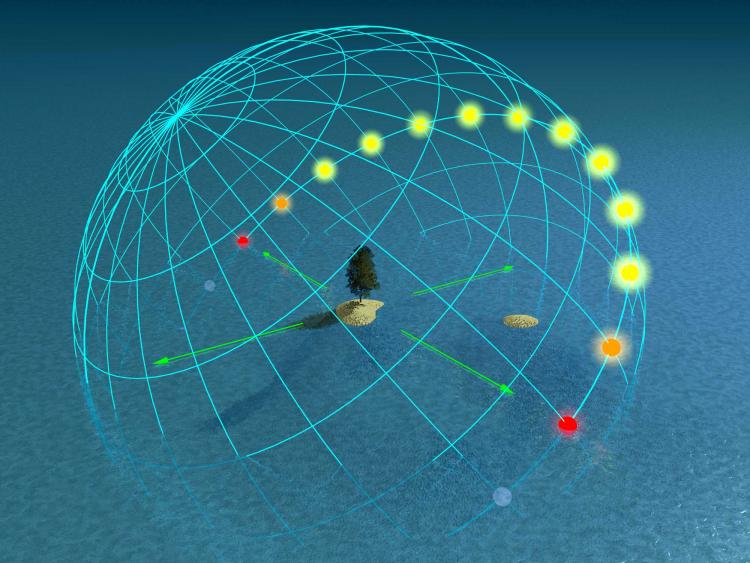 The images below demonstrate singular arcs of the Sun for each hour in solar time, at five different latitudes on Earth (no analemma correction necessary). The peak hour (or the hour with the highest solar altitude angle) is defined as solar noon. You will notice that the solar equinox has twelve sun spots for latitudes below the arctic circle, and that the sun rises due East, while setting due West. During the solar solstices, you see multiple arcs: one for winter and one for summer. Notice that there are more hours of the day in the summer, and the sun rises farther from the equator in the Summer (sun rise in the northeast for the Northern Hemisphere).

What else do you notice in comparing the four critical times of year at different latitudes?

Figure 2.10: Solar Equinox
Click on the images above to see full-size versions with descriptions.
Credit: All images are by Tau'olunga from Wikimedia Commons licensed under CC BY-SA 2.5

Figure 2.11: Solar Solstice.
Click on the images above to see full-size versions with descriptions.
Credit: All images are by Tau'olunga from Wikimedia Commons licensed under CC BY-SA 2.5

Now, we are ready to use hour angle to find out positions in our solar design projects!

Using the information and equations you learned above, calculate the solar angle for the following times.


3. What is the solar angle for noon?