This is a brief recap to set the stage for orthographic projections and polar projections used in the shading analysis project to come.

In a spherical coordinate system, the angles are the coordinates. So, if I were standing in a field in North Dakota, looking at something tall like an enormous wind turbine, I could define the position of the top of the nacelle relative to me by stating the general azimuth angle (, the rotation across the horizon from due South) and the general altitude angle (, the rotation up from the horizon). Effectively, this is my x () and y () coordinates on an orthographic projection of the sky dome on a flat surface. 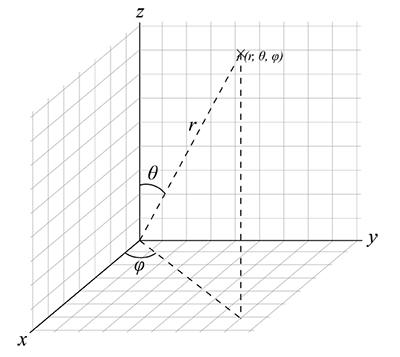 Many of you will be familiar with Cartesian coordinates in space (x, y, z). However, when dealing with spatial relations of spherical objects like the Earth and the Celestial Sphere, we find that working with basic spherical coordinate systems makes trigonometry available to us to solve for space and time equations. For spherical coordinates, we need information of radial distance, zenith angle, and azimuth. However, in solar positioning studies, a radius of one (unit radius) is all we need to establish a unit vector, and we are left with equations for only the zenith angle and azimuth (and the complement of the zenith angle, the altitude angle). Note how the zenith angle in Figure 2.15, above (the generic angle), is congruent with the solar zenith () of the Sun, and the generic azimuth angle () is congruent with the solar azimuth ().

As seen in Figure 2.16, we need to pull back to our old trigonometry mneumonics! Recall "Soh Cah Toa" when looking at the figure: 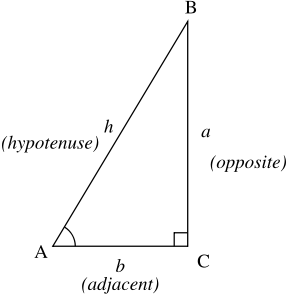 Figure 2.16: Right Triangle with side lengths [a (opposite), b (adjacent), h (hypotenuse)] and angles [A, B, C].
Credit: J. Brownson © Penn State University is licensed under CC BY-NC-SA 4.0
‹ 2.11 Collector Orientation up 2.13 Sky Dome and Projections ›
EME 810: Solar Resource Assessment and Economics