Welcome to the next increment of the GPS course. This is Lesson Four, and we will be discussing GPS receivers, some of their common characteristics, and some of the methods used in GPS surveying. The receivers are the most important hardware in a GPS surveying operation. Their characteristics and capabilities influence the techniques available to the user throughout the work. There are many different GPS receivers on the market. Some of them are appropriate for surveying, and they share some fundamental elements. Though no level of accuracy is ever guaranteed, with proper procedures and data handling they are generally capable of accuracies from sub meter to centimeters. Most are also capable of performing differential GPS, real-time GPS, static GPS, etc., and are usually accompanied by processing and network adjustment software and so on.

GPS receivers come in a variety of shapes and sizes. Some have external batteries, data collectors. Some are tripod mounted. Some are hand-held and have all components built in, and some can be used in both ways, with externals and without. Nevertheless, most have similar characteristics. Here is a schematic drawing of a GPS receiver.  It includes some of the common components. 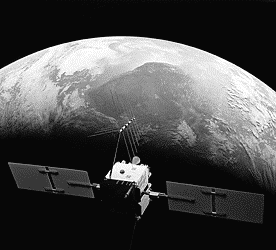 A GPS receiver must collect and then convert signals from GPS satellites into measurements of position, velocity, and time. There is a challenge in that the GPS signal has low power. An orbiting GPS satellite broadcasts its signal across a cone of approximately 28º of arc. From the satellite’s point of view, about 11,000 miles up, that cone covers a substantial portion of the whole planet. It is instructive to contrast this arrangement with a typical communication satellite that not only has much more power, but also broadcasts a very directional signal. Its signals are usually collected by a large dish antenna, but the typical GPS receiver has a small, relatively non-directional antenna. Stated another way, a GPS satellite spreads a low power signal over a large area rather than directing a high power signal at a very specific area. Fortunately, antennas used for GPS receivers do not have to be pointed directly at the signal source. The GPS signal also intentionally occupies a broader bandwidth than it must to carry its information. This characteristic is used to prevent jamming and mitigate multipath but, most importantly, the GPS signal itself would be completely obscured by the variety of electromagnetic noise that surrounds us if it were not a spread spectrum coded signal. In fact, when a GPS signal reaches a receiver, its power is actually less than the receiver's noise level; fortunately, the receiver can still extract the signal and achieve unambiguous satellite tracking using the correlation techniques described earlier. To do this job, the elements of a GPS receiver function cooperatively and iteratively. That means that the data stream is repeatedly refined by the several components of the device working together as it makes its way through the receiver.

‹ Checklist up The Antenna and The Right Hand Circular Polarized Signal ›