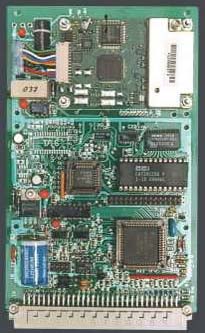 The microprocessor in a GPS receiver is the computer that manages data collection and is the home of the applications that mitigate multipath, noise, extract the ephemerides and other information from the Navigation message or newer navigation messages such as CNAV.  It controls the entire receiver: the digital circuits, the tracking and measurements. The receiver also has storage.  However, more and more, the microprocessor is expected to produce the position in real time, instantaneously, or near real-time by processing the ranging data, doing reference frame (datum) conversion, and sending the position to the control and display unit (CDU). There is a two-way street between the microprocessor and the CDU; each can receive information from or send information to the other. Autonomous single-point positioning using unsmoothed code pseudoranges are based upon corrections provided in the navigation messages, which, as you know, have a certain amount of weakness.  Though they have improved since Selective Availability has been switched off they are generally not as accurate as differentially corrected positions.  Code-based pseudoranges using DGPS, differential GPS, can achieve good real-time, or post-processed results. DGPS is often used in collecting data for Geographical Information Systems, GIS. The type of differential positioning sometimes known as DGPS depends on code pseudorange observations, but requires at least two receivers. One receiver is placed on a control station, the base, and another on an unknown position, the rover. The base station antenna needn't be on a building as illustrated. It could be on a tower. It could be on a non-GPS satellite. There are services that allow you to subscribe to a correction signal. In those cases, there is a network of base stations collecting the signals from the constellation; the correction signal is compiled, beamed up to the non-GPS satellite, and that same message sent back down from the non-GPS satellite to subscribers. In all configurations the base and the rover simultaneously receive the same signals from the same constellation of at least four GPS/GNSS satellites. That's important in that way many of the errors in the observations are common to both the base and the rover receivers, the errors are correlated and tend to cancel each other to some degree. The data from such an arrangement can be post-processed; although, with a link between the base and the rover a correction signal can be sent to the rover so that differential results can be had in real-time. Improvements in this technology have refined the technique's accuracy markedly, and meter- or even submeter results are possible. Still, the positions are not as reliable as those achieved with the carrier phase observable.

With GIS, corner search and mapping work excepted, much GPS work requires a higher standard of accuracy. Certainly, GPS control surveying often employs several static receivers that simultaneously collect and store carrier phase data from the same satellites for a period of time known as a session. After all the sessions for a day are completed, their data are usually downloaded in a general binary format to the hard disk of a PC for post-processing.  However, carrier phase positioning can also be done in real-time. 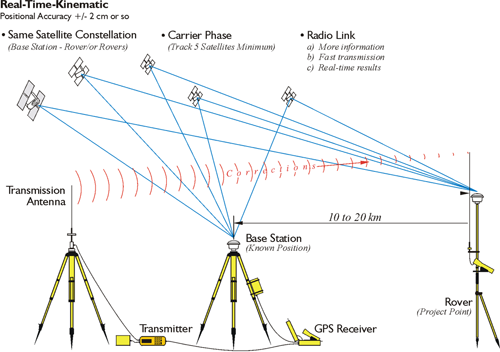 Real-time kinematic surveying uses the carrier phase solution. Often, there is a radio link between the base and rover. While the baseline length with DGPS is often 100 to 200 kilometers or longer, the baseline length in RTK is more typically 10 to 20 kilometers, often less. However, the arrangement of receivers is similar: the constellation of satellites being tracked at the base station and also tracked at the rover, the base station is at a known point. There is a transmission antenna used in RTK. It transmits the correction signals to the rover in real time correction. While the arrangement is similar to DGPS, the solution is carrier phase as opposed to pseudorange. The minimum number of satellites with RTK is five. It is five, so that one can be lost and still assured that there will be a solution.

‹ The Integer Ambiguity up The CDU ›