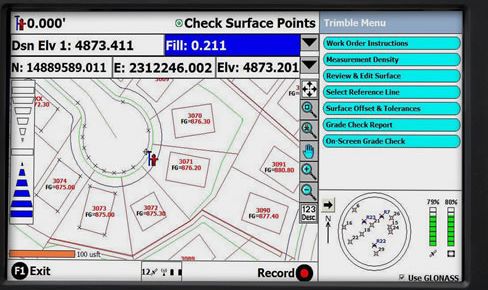 A GPS receiver will often have a control and display unit. From handheld keyboards to soft keys around a screen to digital map displays and interfaces to other instrumentation, there are a variety of configurations. Nevertheless, they all have the same fundamental purpose, facilitation of the interaction between the operator and the receiver’s microprocessor. A CDU typically displays status, position data, velocity and time. It may also be used to select different surveying methods, waypoint navigation, and/or set parameters such as epoch interval, mask angle, and antenna height. The CDU can offer a combination of help menus, prompts, datum conversions, readouts of survey results, estimated positional error, and so forth. The information available from the CDU varies from receiver to receiver. But when four or more satellites are available, they can generally be expected to display the PRN numbers of the satellites being tracked, the receiver’s position in three dimensions, and velocity information. Most of them also display the dilution of precision and GPS time.

There are a wide variety of control and display units. Some have keyboards and soft keys on the screen. The touch screens are available in GPS receivers and controllers. They all have the same purpose which is the interface between the operator and the receiver's microprocessor. Selection sets vary, too—surveying methods, the epoch interval, the mask angle, antenna heights. Displays vary from receiver to receiver. Typically, when four or more satellites are available, they are displayed with their the PRN numbers along with the receiver's position in three dimensions.

‹ The Microprocessor up The Storage ›