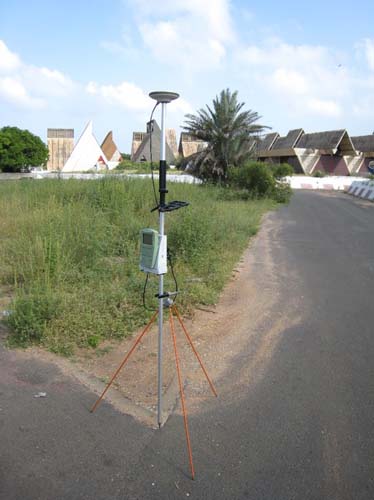 Static GPS surveying was the first method of GPS surveying used in the field, and it continues to be the primary technique for GPS/GNSS control today. Relative static positioning involves several stationary receivers simultaneously collecting data from at least four satellites during observation sessions that usually last from 30 minutes to 2 hours. A typical application of this method would be the determination of vectors, or baselines as they are called, between several static receivers to accuracies from 1 ppm to 0.1 ppm over tens of kilometers. There are few absolute requirements for relative static positioning. The requisites include: more than one receiver, four or more satellites, and a mostly unobstructed sky above the stations to be occupied. But as in most of surveying, the rest of the elements of the system are dependent on several other considerations. 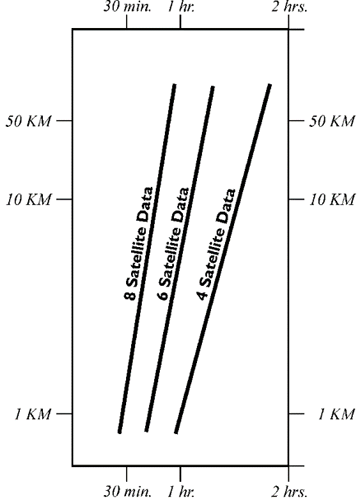 Here is a diagram of approximate session lengths required for GPS static surveying. For example, with an eight satellite constellation and a 10 kilometer baseline, something between a half an hour and an hour would typically be required. A four satellite constellation might require a session between one and two hours for a baseline of the same length. The assessment of the productivity of a GPS survey almost always hinges, in part at least, on the length of the observation sessions required to satisfy the survey specifications. The determination of the session's duration depends on several particulars, such as the length of the baseline and the relative position, that is the geometry, of the satellites among others. Generally speaking, the larger the constellation of satellites, the better the available geometry, the lower the positioning dilution of precision (PDOP), and the shorter the length of the session needed to achieve the required accuracy. For example, given six satellites and good geometry, baselines of 10 km or less might require a session of 45 minutes to 1 hour, whereas, under exactly the same conditions, baselines over 20 km might require a session of 2 hours or more. Alternatively, 45 minutes of six-satellite data may be worth an hour of four-satellite data, depending on the arrangement of the satellites in the sky.

Relative static positioning, just as all the subsequent surveying methods discussed here, involves several receivers occupying many sites. Problems can be avoided as long as the receivers on a project are compatible. For example, it is helpful if they have the same number of channels and signal processing techniques. The subject comes up from time to time as to whether or not data from receivers from various manufacture can be used on the same project together at the ends of even the same baseline. The answer is, yes of course because fortunately, there is a  file format, that allows one to use receivers of many types together. It is the Receiver Independent Exchange Format, RINEX , developed by the Astronomical Institute of the University of Berne in 1989.  It allows different receivers and post-processing software to work together. Almost all GPS/GNSS processing software will output RINEX files.

‹ The Power up Receiver Categories ›