5.3 How can supersaturation be achieved?

5.3 How can supersaturation be achieved?

Three basic mechanisms for cooling the air are RUM: Radiation, Uplift, and Mixing.

Radiation and mixing happen at constant pressure (isobaric); uplift happens at constant energy (adiabatic). Let’s consider these three cases in more detail. A good way to show what is happening is to use the water phase diagram. The video (3:15) entitled "Supersaturation Processes 2" below will explain these three processes in greater detail:

All matter radiates energy as electromagnetic waves, as we will see in the next lesson. When an air parcel radiates this energy (mostly in the infrared part of the spectrum), it cools down, but the amount of water vapor does not change.

We can understand this process by using the water phase diagram in the figure below. Consider a situation in which an air parcel is undersaturated, which is represented by the blue dot. As the air parcel emits radiation, the air parcel cools but does not change its vapor pressure. Hence, the blue dot moves to the left on the diagram. However, because the temperature drops, es drops. When es becomes slightly less than e, a cloud forms. 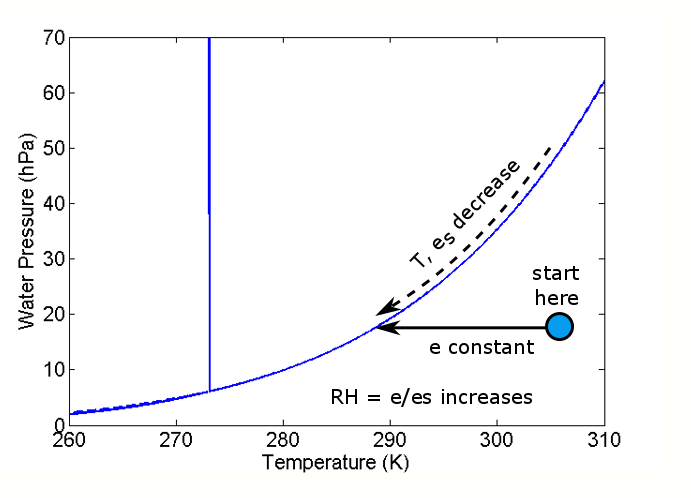 Water phase diagram for radiative cooling, with an air parcel starting with e and T marked by the blue dot. The horizontal arrow marks the cooling of the air parcel and the downward pointing arrow marks the change in es and T as the parcel cools. When es becomes slightly less than e, a cloud forms.
Credit: W. Brune © Penn State is licensed under CC BY-NC-SA 4.0

An example of radiative cooling in action is radiation fog, which occurs overnight when Earth's surface and the air near it cool until a fog forms (see figure below). 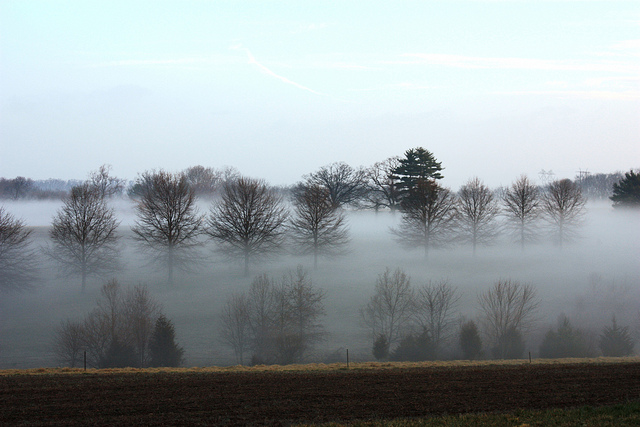 Assume two air parcels with different temperatures and water vapor partial pressures are at the same total pressure. If these two parcels mix, then the temperature and the water vapor partial pressure are going to be weighted averages of the T and e, respectively, of the two parcels. The weighting is determined by the fraction of moles that each parcel contributes to the mixed parcel. Mathematically, for parcel 1 with e1, T1, and N1 (number of moles) and parcel 2 with e2, T2, and N2, the e and T of the mixed parcel are given by the equations:

where M1 and M2 are the masses of the air parcels. On the phase diagram, these give straight lines for different proportions of the mixed parcel being from parcel 1 (0% to 100%) and parcel 2 (100% to 0%), as in the figure below. 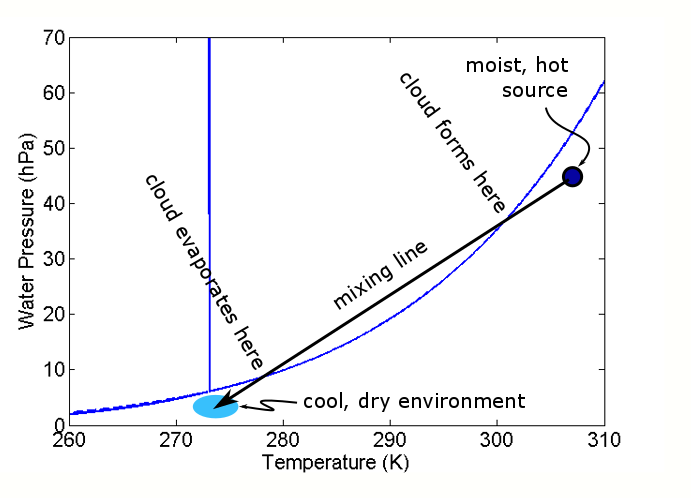 There are many good examples of mixing clouds. One is a jet contrail; a second is your breath on a cold day; a third is a fog that forms when cold, dry air moves over warm, moist ground, say just after rain. 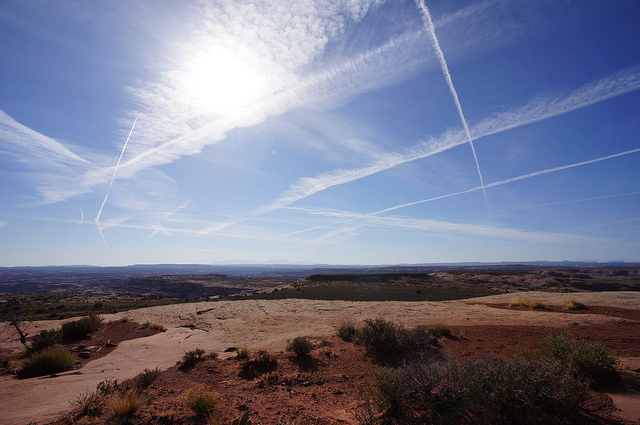 The uplift of air can lead to cloud formation, as we know from the skew-T. Uplift is generally the same as adiabatic ascent. This adiabatic ascent can be driven by convection, by a less dense air mass overriding a more dense one, or by air flowing up and over a mountain. The following happens:

The question is “Does e or es drop faster?" It turns out that es drops faster. As a result, in uplifted air, e and es converge at the lifting condensation level (LCL) and a cloud forms just at that level (see figure below). 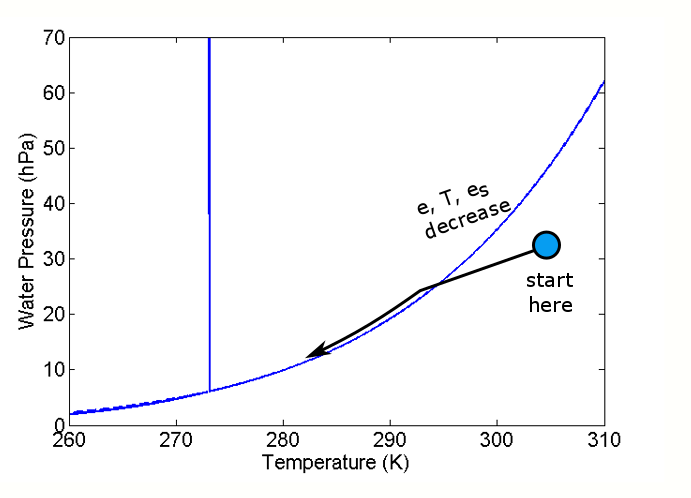 The arrow on the figure above shows the changes in e and T (and thus es) as an air parcel rises. Once es <= e, then s > 0 and the air parcel is supersaturated. This supersaturated situation is not stable; the water vapor in excess of es forms liquid. As the uplift continues, more water vapor is converted into liquid water and the vapor pressure remains close to es. All convective clouds, that is clouds with vertical extent, form this way. An example of adiabatic uplift is a cumulus cloud, as seen in the figure below. 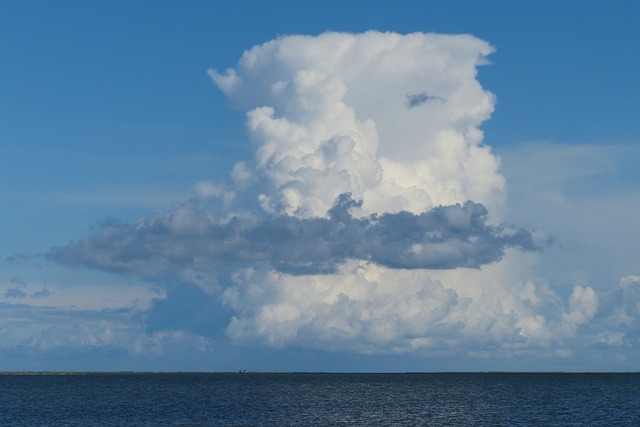 A cumulus cloud over the ocean.
Credit: Cumulus cloud by JanneG from Pixabay is licensed under the Simplified Pixabay License

Why is supersaturation required for a cloud drop to form?

I thought that cloud drops formed when w = ws. Why is supersaturation required for a cloud drop to form?

To answer this question, we need to look through a microscope at the nanometer scale, which is the scale of molecules and small particles. You all know that cloud condensation nuclei are needed for clouds to form, but do you know why? Watch the following video (3:16) entitled "Glory: The Cloud Makers."

[music playing] NARRATOR: Aerosols are suspended throughout Earth's atmosphere, and the tiny, varied particles play a mysterious role in human induced climate change. Just like people, every aerosol particle is unique. Sometimes aerosols occur naturally, from things like volcanoes, but they can also originate from human activity. Aerosols are short-lived, but have an active lifetime! In just a short expanse of time, particles can change their size and composition and even travel across vast oceans. Aerosols are difficult to study, and one important new area of research involves how these particles impact clouds. Without aerosols, clouds could not exist. MICHAEL MISHCHENKO: An aerosol particle can serve as a cloud condensation nucleus. NARRATOR: The introduction of too many aerosols will modify a cloud's natural properties. MICHAEL MISHCHENKO: The more aerosol particles we have in the atmosphere, the more cloud droplets we can have. NARRATOR: Clouds play an important role in regulating Earth's climate; aerosol-rich clouds become bigger, brighter, and longer lasting. Aerosols impact clouds in other ways. Some aerosol particles primarily reflect solar radiation and cool the atmosphere, and others absorb radiation, which warms the air. When aerosols heat the atmosphere, they create an environment where clouds can't thrive. The suppression of clouds leads to further warming of the atmosphere by solar radiation. Researchers are still working to understand the role of these curious particles. MICHAEL MISHCHENKO: We need to study the distribution of particles globally, and the only way to do that is from satellites. NARRATOR: New tools will soon help scientists study aerosols. The Aerosol Polarimetry Sensor, or APS, is among a suite of instruments onboard NASA's upcoming Glory mission. The APS will provide a global dataset of aerosol distribution with unprecedented accuracy and specificity. Unique data from the Glory mission, along with NASA's fleet of Earth observing satellites, will help researchers investigate the intricacies of Earth's changing climate. [music playing] [wind blowing]

In the atmosphere, relative humidity rarely rises much above 100% because small aerosol particles act as Cloud Condensation Nuclei (CCN). Two effects most strongly determine the amount of supersaturation that each particle must experience in order to accumulate enough water to grow into a cloud drop. The first is a physical effect of curvature on increasing the equilibrium water vapor pressure; the second is a chemical effect of the aerosol dissolving in the growing water drop and reducing its vapor equilibrium pressure. You will learn about these two effects in the next two sections of this lesson.

‹ 5.2 What are the requirements for forming a cloud drop? up 5.4 Curvature Effect: Kelvin Effect ›
METEO 300 Fundamentals of Atmospheric Science