The growth of the cloud drop depends initially on vapor deposition, where water vapor diffuses to the cloud drop, sticks, and thus makes it grow. The supersaturation of the environment, senv, must be greater than sk for this to happen, but as the drop continues to grow, sk approaches 0 (i.e., eeq approaches es), so smaller amounts of supersaturation still allow the cloud drop to grow. Deriving the actual equation for growth is complex, but the physical concepts are straightforward. 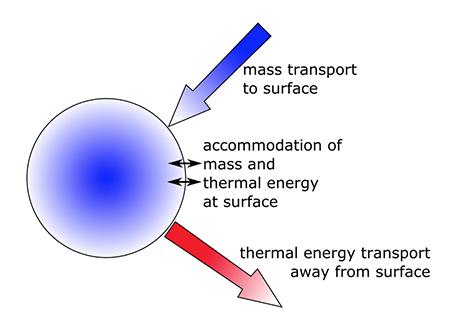 Schematic of the two physical processes in the growth of a cloud drop by vapor deposition. One is vapor deposition and the other is the transfer of condensational heating to the atmosphere;
Credit: W. Brune (after Lamb and Verlinde)
[5.14]
where G is a coefficient that is a function of T and p, ρl is the density of liquid water, and the other variables have already been defined. G incorporates the effects of the mass transport of water vapor molecules to the surface and the transport of heat generated on condensation away from the particle surface. Plugging in md = ρl4πrd3/3 to 5.14, taking the derivative, and solving for drd/dt, it is easy to show (try it!) that drd/dt is proportional to 1/rd. That is, the bigger the drop gets the slower it grows. Separating variables (rd and t) and integrating from rd = 0 at t = 0 to arbitrary values of rd and t reveals that rd is proportional to the square root of time:
rd = (Ct)1/2
[5.15]
where the constant C = 2G(senv – sk). The figure below shows how rd varies with time for a typical value of C, 4 x 10–13 m2 s–1. 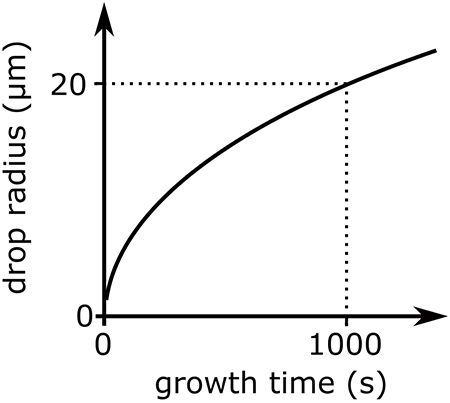 Growth of a cloud drop by vapor deposition as a function of time. Dashed lines indicate drop size after the typical cloud lifetime.
Credit: W. Brune

We need other processes to get cloud drops big enough to form precipitation, either liquid or solid.

‹ 5.6 Koehler Theory up 5.8 Did you know most precipitation comes from collision-coalescence? ›
METEO 300 Fundamentals of Atmospheric Science