5.1 Do you recognize these clouds, drops, and snowflakes?

5.1 Do you recognize these clouds, drops, and snowflakes?

Clouds have fascinated people for millennia, but it wasn’t until 1802 that Luke Howard first classified clouds with the terms that are used today. His classification scheme was formalized later in the 19th century and has 10 basic cloud types with many minor variations (see figure below). 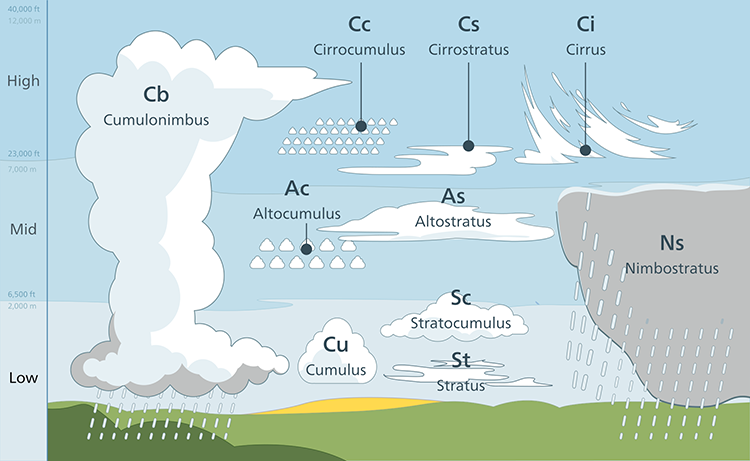 Genus classification of clouds by altitude of occurrence.
Credit: Wikipedia

This website contains a nice overview of the cloud types with descriptions and accompanying images. Check out some of their amazing photos!

NOAA and NASA put together this thorough Sky Watcher Chart that describes a wide variety of cloud formations.

Cloud physics goes beyond the classification of clouds to determine the actual physical and chemical mechanisms that create clouds and cause their evolution over time. There are two aspects of cloud physics. One is the physics on the cloud scale, which is tens to hundreds of meters in size. This physics is driven in part by behavior in the cloud’s environment, such as the wind shear or the location of a front, and determines the evolution of the cloud and the cloud’s size and shape. All of this action, however, is not possible without the physics that is occurring on the microscale, which is less than a few centimeters in size.

This lesson deals mostly with the physics that occurs on the microscale and is often called cloud microphysics. Now that you are familiar with the concepts of thermodynamics and water vapor, we are ready to look at the fundamentals of cloud microphysics. To understand cloud-scale physics will require an understanding of atmospheric dynamics and turbulence, which are introduced in later lessons of this course.

A cloud is defined as a (visible) suspension of small particles in the atmosphere. For a water cloud, there are a number of types of particles that we are interested in. 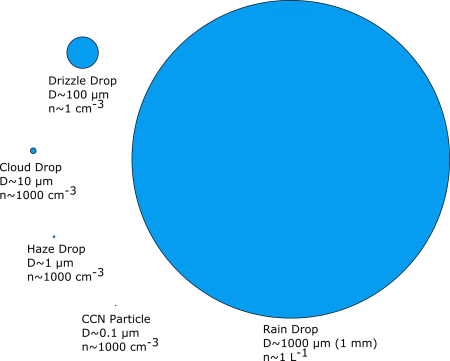 Cloud drop sizes and characteristics. D is the typical diameter; n is the typical number per volume of air. Sizes are almost but not quite to scale.
Click here for a text description of the image above

Note the wide range in size, volume, and number of particles in the figure above. The smallest, the cloud condensation nuclei (CCN), can have rather little water and are made up of substances to which water can attach (called hydrophilic, water loving). The other particles grow by adding water molecules but still contain the original CCN upon which they formed.

We can specify the amount of water that is in liquid form by using the liquid water content (LWC), which is defined as: 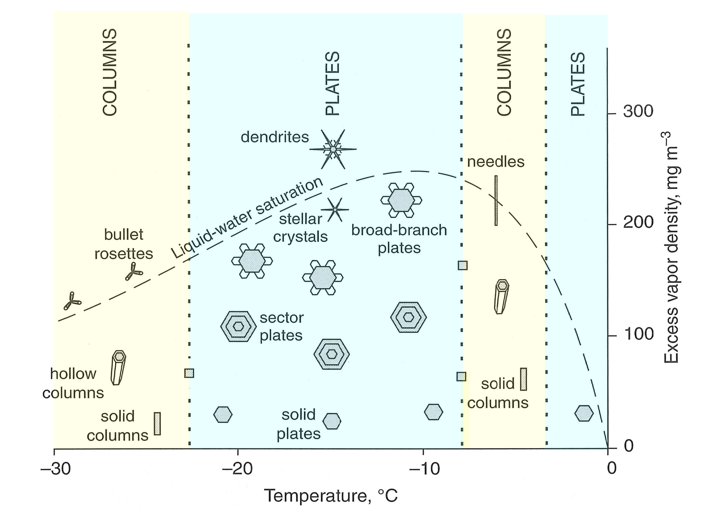 Above the liquid-water saturation line: dendrites

On the liquid-water saturation line: needles 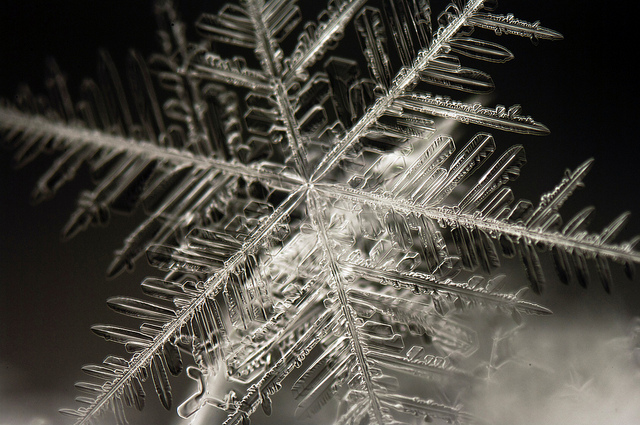 A snowflake. Its shape with dendrites indicates that it formed with a lot of excess water vapor and a temperature of about –16 oC.
Credit: bkaree1 via flickr

The next time it snows, catch snowflakes on a cold surface and take a good look at them. Their shape will tell you a lot about the environment in which they were formed. In State College, Pennsylvania, we often see plates with broad branches and sometimes we see dendrites, telling us that the snowflakes were formed at altitudes in the cloud where the temperature was between –22 oC and –8 oC and the excess vapor density was large.

It's time to look up at the sky to observe the clouds. During the next week, take pictures of clouds and identify the clouds in the pictures. Try to focus on just one cloud type per image. Submit an image that depicts at least one cloud type.

You will upload each image in its own post. You should include the following in your post:

Copy and paste your picture into the post box. Instructions for how to embed an image in your post can be accessed here.

This discussion will be worth 3 discussion points. I will use the following rubric to grade your participation:

‹ Overview up 5.2 What are the requirements for forming a cloud drop? ›
METEO 300 Fundamentals of Atmospheric Science