Tropical cyclones are storms that are born in tropical oceans and depend on warm water for their source of energy. They originate between 4° and 22° S of the equator, and between 4° and 35° N of the equator. During the northern hemisphere’s summer (July-September), most of the energy is delivered to the sub-tropical region of the northern hemisphere. The result is the development of large cyclonic (counterclockwise rotating) cells that are termed hurricanes if they form near North America and typhoons if they are formed in the western Pacific. Tropical cyclones do not, however, occur in the equatorial zone. More than two-thirds of tropical cyclones occur in the northern hemisphere and occur between May and November, when the ocean is at its warmest, with a peak in August and September. In the southern hemisphere, they occur between December and April, with peaks in January and February, where they are typically called cyclones.

How Do Hurricanes Form?

We generally associate tropical cyclones with the damage they do when they come in contact with land, but they spend most of their “life” out in the ocean and are a phenomenon best explained in terms of heat transfer between the atmosphere and the ocean.

The Birth of a Cyclone

The generation of a tropical cyclone is dependent upon the transfer of thermal energy from the ocean to the atmosphere. When significant volumes of warm water vapor move upwards, low-pressure cells develop at the Earth's surface and large storms are generated. In the process, water vapor evaporated into the atmosphere will cool and condense. This is ultimately how storm clouds are produced. As the water begins to fall back to the surface, large scale convective cells are generated, and the air mass is forced to spin in response to the Coriolis Effect. This causes deflection of air masses to the right in the northern hemisphere and deflection to the left in the southern. For storms to sustain themselves, the upward movement of warm water vapor needs to be constantly resupplied or the storm will weaken and eventually fall apart.  The video beelow explain how a hurricane forms and outlines its anatomy:

Click here for a transcript of the Hurricanes 101 Video.

(heavy winds blowing) - [Narrator] Cyclone, typhoon, hurricane. All of these names are used around the world to describe the most powerful storm known to man. Hurricanes are unpredictable but scientists have a through understanding of how hurricanes form and sustain their power. In the Atlantic Ocean, hurricane season peaks during the late summer months when tropical waters are the warmest. Hurricanes form from a cluster of thunderstorms that suck up the warm, moist air and move it high into Earth's atmosphere. The warm air is then converted into energy that powers the hurricane's circular winds. These winds spin around a low-pressure center called the eye. Which can provide a 20 to 30 mile radius of eerie calm. Encircling it is the eye wall, a towering ring of clouds with some of the fastest wind-speeds of the hurricane. Surrounding the eye wall are curved bands of clouds. The rainbands, often tens of miles wide releasing sheets of rain and sometimes tornadoes. When a tropical storm's winds reach at least 74 miles per hour, it becomes a hurricane. The hurricane then receives the category ranking of one to five on the Saffir-Simpson Scale based on its wind speed and potential damage. But wind speed isn't always the most dangerous component when hurricanes come near land. It's storm surge. Storm surge is caused when winds from an approaching hurricane push water towards the shoreline up to 20 feet above sea level and can extend 100 miles. 90% of all hurricane deaths are the result of storm surge. While hurricanes can cause mass devastation, just like other natural disasters, they serve a higher purpose within the global ecosystem. Hurricanes help regulate our climate by moving heat energy from the equator to the poles keeping the Earth's temperature stable. Over time, science has helped us to better understand hurricanes and predict their paths. Saving lives through early warning systems and helping us build better infrastructure to protect our cities. The more we study these complex storms, the better we can prepare for them and minimize their impact on human lives.

How a hurricane develops: Hurricane Facts

For a tropical cyclone to generate, the temperature of the upper 60 meters (~200 ft.) of the ocean water must be greater than 26°C (~79°F). In addition, certain atmospheric conditions are needed to drive the formation of convection cell described above. Horizontal shear winds prevent formation; conversely, in conditions with low wind shear, heat and moisture are retained to allow continued development. The building of the tall cumulonimbus clouds associated with a tropical cyclone depends on the deep convection currents extending into the troposphere.  The initial anomaly is called a tropical wave, and then with progressive intensification, it is called a disturbance, an investigation (where it is given a number), then a depression, tropical storm, then a hurricane. This is explained in the following video:

Video: The Basics of Hurricanes and Tropical Weather Forecasting (8:07)

Click here for a transcript of The Basics of Hurricanes and Tropical Weather Forecasting Video.

Anatomy of a Hurricane

There are distinct stages of formation that vary greatly from storm to storm. As the pressure drops in the center of the storm, the winds that rotate around the center increase. Narrow cloud bands form, spiraling inwards. The center of the storm, or the eye, is where the lowest pressure is found. The eye wall at the edge of the eye has some of the strongest winds and intense thunderstorms, but the eye itself is characterized by calm. The hurricane-force winds may extend out from the eye for 300 km (~186 miles). The strongest winds occur towards the right-hand side of the center in the direction of the cyclone’s path, so a storm moving north will have the strongest winds in the northeastern quadrant. 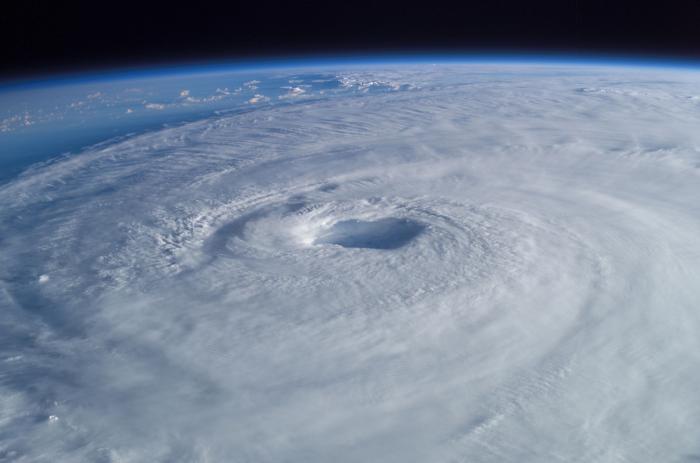 A cross-section diagram of a mature tropical cyclone, with arrows indicating airflow in and around the eye
Credit: Hurricane-en by Kelvinsong via Wikimedia Commons licensed under CC BY 3.0

Hurricane movement is guided by surface winds.  As we will see in the examples given, the Atlantic hurricanes travel west or northwest across the Atlantic and then recurve to the north and then northeast. This curvature is dictated by the Coriolis effect, which is caused by the Earth’s rotation. This pattern also occurs in the northern Pacific. Although these are predictable patterns, each storm has a unique path and there is great variation depending upon the atmospheric conditions near the storm, which act as steering forces.  As we will see later wind movements are a function of atmospheric pressure, with storms basically moving around high pressure systems and towards low pressure systems.

Nevertheless, the patterns made by the historic tracks seen in the animation below show how the storms generally follow certain rules. This predictability aids in forecasting the paths using satellite data and numerical modeling.

Visualization of historic warm core storm tracks from 1950 to 2005.
Credit: NOAA Science on a Sphere (SOS)

The cyclone’s interaction with the ocean’s surface has an effect of reducing the surface temperatures of the ocean. Once the storm approaches land, it encounters shallower water and begins interacting with coastal features. Friction and loss of the warm water “fuel” remove energy from the system, and it will dissipate once over land. It is at the ocean-land interface that the storm surge, which builds with the storm in the ocean, creates a tremendous hazard for those living on the coast.