There is nothing that epitomizes the sheer destructive force of nature than a tsunami. And these destructive events have caused extraordinary damage in coastal regions of the Indian and Pacific Oceans, and the Mediterranean. Tsunami have actually changed the course of history as we will see! Tsunami are caused when large movements of the seafloor occur suddenly displacing the water above them. As we will learn in this module, this movement can be caused by an earthquake, a volcanic eruption or a submarine landslide or avalanche.

Or even a meteorite collision! Possibly the largest tsunami Earth has ever experienced happened 66 million years ago in the Gulf of Mexico. This massive collision in the northern Yucatan peninsula of Mexico opened up a 180 km wide crater in a matter of minutes. Water rushed into the crater then quickly out again, creating a giant tsunami that may have been as big as 45 to 90 meters (150 to 300 feet) tall. The tsunami rapidly converged on the coast of Mexico and Texas drowning out animals, possibly including dinosaurs that were living near the ocean. Evidence for this tsunami comes from sedimentary rocks that are found at the time of the impact around the Gulf of Mexico. In fact, characteristic sedimentary deposits known as tsunamiites are evidence for ancient powerful tsunami and we will explore some of these catastrophic events in this module.

More recent tsunami have captured the imagination of historians. The cataclysmic eruption on the Greek Island of Santorini in 1600 BC triggered a tsunami that may have led to the end of the Minoan civilization on the island and the nearby island of Crete. And the collapse of the volcanic island of Krakatoa in 1883 caused an estimated 30,000 deaths on nearby Java. A tsunami around Puget Sound near Seattle in 1700 is a portent or warning of a massive event in the so-called Cascadia margin that threatens the citizens of Portland, Seattle, Vancouver and Victoria.

The last 20 years have seen powerful tsunami that have caused massive destruction and staggering numbers of fatalities. The December 26th, 2004 Indian Ocean event, caused by a massive submarine earthquake which caused upward of 250,000 deaths in countries around the Indian Ocean really woke people up to the extreme danger of tsunami, and governments up to the need for forecasting and especially for the need for rapid warning systems. The similarities between hurricane storm surge which we learned about in Modules 5 and 6 and a tsunami include the devastation of a community, followed by recovery and rebuilding. But there are also great differences in the ways coastal communities prepare for the two kinds of events.

Click here for a transcript of the Japan Tsunami | National Geographic video.

Man reporting: All across northern Japan, they felt it, a violent magnitude 9.0 earthquake on March 11, 2011. It was centered about 80 miles offshore and tsunami warnings went up immediately. In coastal cities, people knew what to do next, run to higher ground. It's from these vantage points on hills and in tall buildings, that incredible footage was captured. In Kesennuma, people retreated to a high-rise rooftop and could only watch in horror as tsunami waves inundated their city, knocking buildings into rubble and mixing into a kind of tsunami soup filled with vehicles, building parts, and contents. Seawater cascaded over sea walls and into cities. This video shows the water rushing over an 18-foot seawall in the Kamakshi city. The seawall here was the world's deepest and largest, but not enough for the magnitude of the March 11 disaster. It was the largest quake ever known in Japan and one of the five largest reported in the world. More than 28,000 people are confirmed dead or missing. When two tectonic plates pushed together under the sea, the resulting earthquake sends an enormous burst of energy up through the ocean displacing enormous quantities of water. With the upward motion, a series of waves expands in all directions. In deep water, these waves travel fast - up to five hundred miles an hour - but only reach a height of a few feet. A passing ship might not even notice. But as the waves enter shallow waters, friction with the ocean floor lowers the wave speed but raises their height. This video is from a Japan Coast Guard ship confronting a tsunami wave in shallow water on March 11. And a rare view from the air, video of a tsunami wave approaching the shoreline. In Japan, some tsunami waves reached as far as 3 miles inland. Japan may be the most seismologically studied country in the world. And with more than 1,200 high-precision GPS stations, a geophysicist at the University of Alaska used the data to create a visualization of the March 11 quake. The waves of displacement that you see were moving as fast as 5 miles per second. In this photo, the ripples of tsunami waves are seen moving upstream in the Naka river at Hitachinaka city. New technology left an enormous amount of visual evidence for studying years to come and can perhaps help us better understand the power of earthquakes and tsunamis and prevent loss of life in the future. 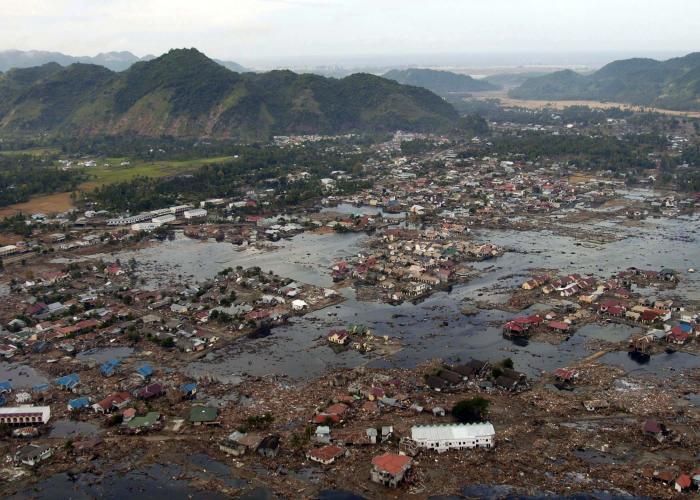 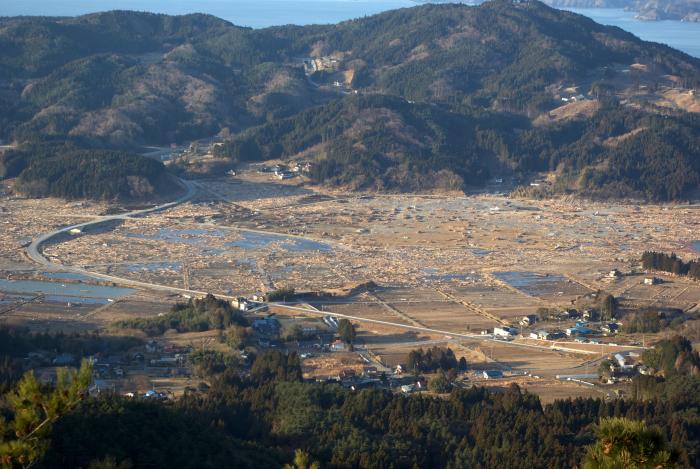 Panorama of the Hirota Peninsula in Japan swept away after the March 2011 tsunami
Credit: Mitsukuni Sato via Wikimedia Commons licensed under CC BY 2.0

Unfortunately, tsunamis and the earthquakes that produce them are not readily predicted. The National Oceanographic and Atmospheric Administration (NOAA) in collaboration with international agencies are collaborating on ways to detect tsunami and strategies to notify people around the world of an event should one be detected. The goal is for future earthquakes to trigger sirens and radio warnings in close-by locations for immediate evacuation and guidance for locations further away for evacuation in the hours to come. Such warning systems have been in place in Japan for several decades because of the great tsunami risk. The March 11, 2011, Tohoku earthquake occurred on a part of the fault line that was not thought to be an immediate threat, but these warning systems saved thousands of lives. A variety of detection tools are used today by geoscientists to help detect these phenomena. We will learn later in the module about tools and the data they collect. However, detecting tsunamis was not always possible, and we still have limitations.

The greatest tsunami risk is in parts of the world that are seismically active. The four projection maps shown below, show the areas of the globe that are most prone to tsunami generation (i.e., shown in red highlights). Most of these areas are identified as high risk for generating tsunamis because, not only are they plate boundary areas, they are also associated with subduction zones where two tectonic plates collide and one is pushed below another. These maps and information about simulating tsunami events for predicting their travel and impacts are from NOAA's Center for Tsunami Research. 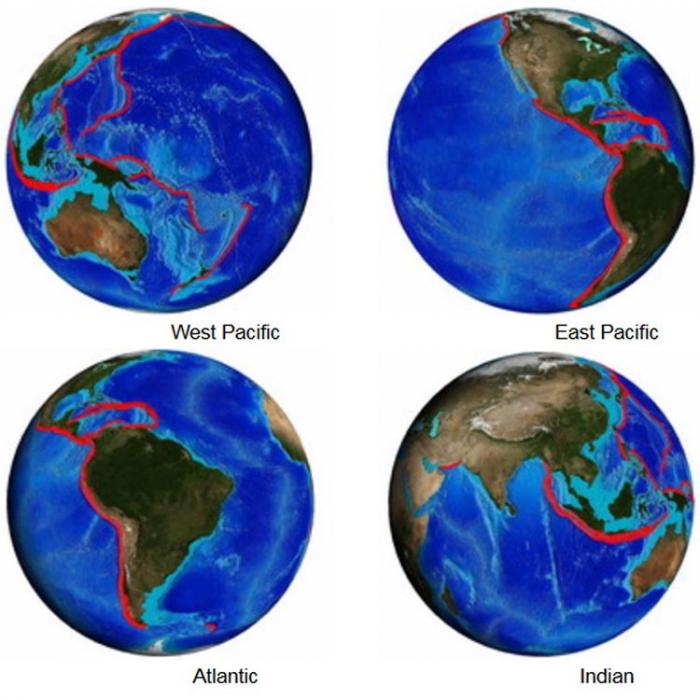 Projection maps showing the areas where most tsunamis originate.
Credit: These are maps produced by NOAA's Center for Tsunami Research

In this module, we will learn about the range of processes that generate tsunami. We will study the wealth of data from the 2004 Indian Ocean and 2011 Tohoku events. And we will learn how warning systems work and places at greatest risk of tsunami in the future.

So sit back, relax, and prepare to be terrified!

If you haven't already, please take a few minutes to read this web article (USGS Circular 1187) titled: Surviving a Tsunami—Lessons from Chile, Hawaii, and Japan. The link provides some important details about tsunamis and some critical information items on how to survive an event if you are ever faced with the need to do so.

‹ Summary and Final Tasks up Goals and Objectives ›