Just a few years after the 2004 event, another large-scale tsunami hit one of the most prepared and most technologically advanced countries in the world. The event occurred on March 11, 2011, when a massive 9.0 magnitude earthquake occurred off the eastern coast of Japan, one of the five largest quakes of the modern era. The quake occurred off the coast of the Tohoku region of Japan, hence it is called the Tohoku earthquake and tsunami.

The geologic context was nearly identical to the 2004 event in Sumatra. An eastward directed mega-thrust earthquake disturbed the seafloor. Even though the area disturbed was smaller than offshore Sumatra, it was still massive and had a similar energy release, and it generated a substantial tsunami that raced across the Pacific Ocean, and, most ominously, towards Japan. The Pacific plate to the east of Japan is moving westward under the North American Plate. Seismic data show that parts of the Pacific Plate moved westward by up to 40 m (130 feet) during the quake! The map below shows the amount of movement, known as slip, on the landward North American Plate, and you can see from the darkest red area, a huge region also moved 40 m (130 feet) in a matter of 2 or 3 minutes! The earthquake moved the island of Honshu 2.5 m (8 ft) to the east and shifted the whole Earth off its rotational axis by 10 to 25 cm! Parts of the Japan coast dropped by 0.6 m (2 ft), making the tsunami more devastating, and parts of the seafloor rose by 7 meters (23 feet)! The earthquake rupture mechanics are well known with an initial speed of 1.5 km (about a mile) per second. So from those last two numbers 7-meter motion and 1.5 km/sec, you can see how the quake generated a tsunami! The depth of the major quake was 30 km, but numerous aftershocks for various magnitudes occurred for two weeks after as you can see from the red dots in the map below. 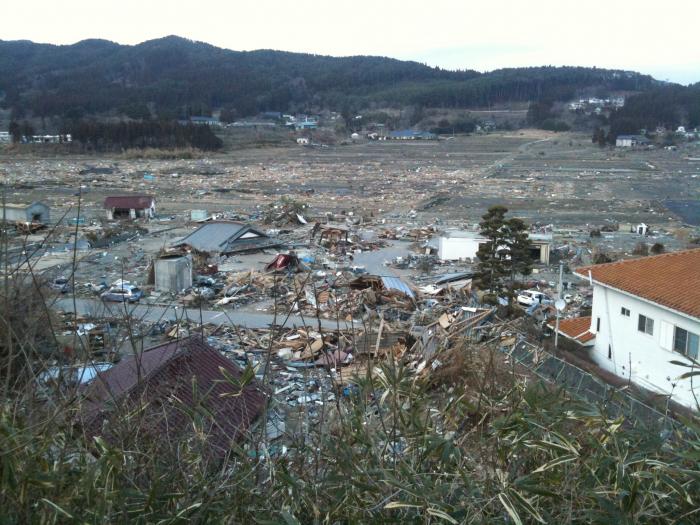 The city of Rikuzentakata, Iwate Prefecture, suffered extensive damage from the tsunami,
Credit: Devastation after tsunami in Rikuzentakata by Mitsukuni Sato via Wikimedia Commons licensed under CC BY 2.0

The quake generated a tsunami wave that came ashore on the Japanese coastline less than an hour after the earthquake. The tsunami wave was detected about 25 minutes after the earthquake by a DART buoy. This model produced by NOAA’s Tsunami Research Center (NCTR) in Seattle, Washington shows the predicted path of the March 11, 2011, Honshu tsunami as it propagated around the Pacific.

The two videos below show terrifying up-close footage of the earthquake and tsunami:

Click here for a transcript of the Dramatic unseen footage of Japanese tsunami video.

Man translating in English while Japanese is being spoken in the background. The first time I realized a tsunami was going to hit, I actually saw it myself. I looked in my rearview mirror and saw an even larger wake.

Woman: Dramatic footage has emerged of the Japanese tsunami in March, shot by an onboard camera on a car belonging to (person's name). It shows the moment that waters flood a busy main road and the chaos that ensues. He lost

Man translating in English while Japanese is being spoken in the background: People were running out of their cars. I suppose that's the last thing. I think everybody was really panicking. It was incredibly quick. It probably only took about ten or twenty seconds from the point when the water hit my car to the car being washed away. At the time I thought I was going to die. It was kind of strange, but I didn't really feel panic myself. I was quite calm. I thought that's how things go, so I might as well do as much as I can. And I decided just to sit inside and wait. I thought that even if my car got swept up by the tsunami, I might land someplace, building, or whatever. I might be able to float to safety. I had it in my mind that I'd use the car to protect me as long as possible, that the car would float to somewhere safe and I'd jump out. Or if that was impossible, and the opportunity came, I'd jump out and float to safety. I think I didn't have to swim

Woman: Mr. Muruga managed to escape from the vehicle and fashion a makeshift raft from his possessions. After sheltering in a warehouse until the waters subsided, he later recovered his car and the tape.

Check out NCTR Tohoku (East Coast of Honshu) Tsunami, March 11, 2011. Also on the site is a maximum wave amplitude model produced by the MOST tsunami model and a new narrated animation of the tsunami propagation and maximum amplitude model. Even more exciting is the fact that NCTR now has a Google Earth interface that provides users with access to datasets (tide data, DART buoy data, etc.) that record water levels in shallow water regions as well as out at sea in deep water where they present water column height (in meters above the seafloor). More on this later.

In any regard, as the length of the fault rupture was relatively small compared to the 2004 Sumatran event, wave propagation was more spherical, and although tsunami beaming occurred, seamounts and other submerged obstructions in the direction of the most prominent beaming direction (i.e., toward the southeast) helped to bend and refract the direct wave so that it lost some of its amplitude as it traveled toward Hawaii and South America. Data measured by tsunami buoys showed that the initial wave close to the fault observed a nearly 2m amplitude wave. As the wave moved toward the southeast, the amplitude subsided to less than a meter, likely as a result of interference as mentioned here. However, the beaming that focused toward the northwest meant that the full force of the direct wave was squarely on the island of Honshu. Given the orientation of the shoreline with numerous river valleys opening to the east and southeast (see below), the tsunami waves were funneled full force into shallow waters and up the progressively narrower valleys located up and down the coast of Honshu.

So, although much had been learned from the 2004 event, and although the tsunami warning system is more advanced and sophisticated and although it had helped to detect and measure the tsunami wave, unfortunately, the tsunami produced an incredible trail of destruction across northern Japan. As discussed, the Tohoku earthquake resulted in uplift and subsidence of portions of the seafloor in northern Japan and some of the shorelines subsided by 0.6 meters. The tsunami was a combination of 10-meter waves that led to wave run-up heights of almost 40 meters (over 120 feet) in some areas, and traveled inland through low-lying river systems at least 10 kilometers and caused over 500 square kilometers to be flooded.

Most coastal defenses were insufficient in preventing the destruction as tsunami seawalls were overtopped or destroyed in many communities. Perhaps the tsunami warning system didn’t function as intended and notice didn’t reach the population. Perhaps the wave was generated so close to shore there was so little time. Perhaps a false sense of security was afforded by the coastal infrastructure built to protect the shoreline. Nevertheless, as a result of the 2011 tsunami, more than 15,000 people died when entire communities were wiped from their seaside locations. The vast majority died as a result of drowning. When you search the Internet, you will easily find tons of videos showing people desperately trying to move to high ground as the wall of water surges inland behind them. There are even videos of residents on the tops of taller buildings who thought they were safe, but who were also washed away. In addition to these frightening occurrences, the tsunami triggered a series of events that led to the failure of the Fukushima Daiichi nuclear power plant. When the plant failed, the nuclear meltdown led to the release of radioactive materials that ended up in the atmosphere and the Pacific Ocean. In addition to radioactive materials, the Japanese government suggested that more than five million tons of debris were washed out to sea as the surge waters retreated back to the sea. As a result of these and other damages, estimates for damage topped $300 billion dollars in Japan alone, but real costs were far greater and continue to mount as a result of clean-up efforts and as a result of the environmental impact on fisheries and agricultural areas that supply food to the population. Extreme Planet has some absolutely mesmerizing photos from the event that are incredible to look at and fundamentally demonstrate how destructive these events can be.

If you haven't already, please look over the series of photos that you can swipe across to see the before and after-effects in a number of locations affected by the tsunami in Japan Earthquake: before and after.

Further away, there were also some noticeable impacts. An entire colony of nesting seabirds (in excess of 110,000 birds) was washed away on Midway Atoll. Relatively minor impacts were felt in Hawaii and along the West Coast of the U.S. The tsunami wave continued to travel over 17,000 km and came ashore in Chile where it produced a modest wave of about 2 meters, luckily occurring near low tide so the impact was minimal. Luckily, the tsunami warning systems went into place and no one was killed as a result. In Antarctica, the tsunami waves broke a number of icebergs off the Sulzberger Ice Shelf. The same event was even linked to a number of impacts in the fjords of Norway where waves nearly 2 meters in height sloshed back and forth around the fjords located along the Norwegian Sea in the northeastern part of the Atlantic Ocean. These waves, termed seiches, were terrifying for local residents and produced some minor damage, but no casualties. Other occurrences have been tentatively linked to either the earthquake or the tsunami wave.