It is an idyllic morning to be at the beach, the day after Christmas 2004, bright sunshine and balmy temperatures greet vacationers on the tropical island of Phuket in Thailand. Kids run in the waves and build sandcastles, and sunbathers relax. The ocean slowly recedes exposing rocks below the low tide line and much further and stranding fish. People venture way out to see this surprising phenomenon. The Earthquake off Sumatra occurred at about 7 AM local time, it was about 500 km away and no one here felt shaking.

A few people had heard about it on TV but no one puts two and two together---the ocean often recedes as a tsunami approaches. A wave appears on the distant horizon, a bright white band on the ocean surface moving slowly toward the land. People stare at it, puzzled. Gradually it dawns on some that the wave is dangerous but others don’t realize it until it’s too late, especially those who had wandered out. The wave is moving really fast. The peaceful beach scene gradually becomes gripped by panic. People flee as fast as they can and run for higher ground. The wave quickly covers the beach and heads for the luxury beachfront hotels. Pools are covered and beach chairs move around like tinker toys. People cling to trees or desperately clamber up to higher floors to escape the wave. Others have already rushed to higher ground inland. The scene at Phuket is similar to many other resorts in Thailand and Malaysia. The wave reached up to 6 meters or 20 feet high here. Up to 300 people lost their lives in Phuket and many more were injured. But while there were places to escape to inland if you were fast enough, that was not an option in the Phi Phi islands, also in Thailand. The lovely beach there is backed by dramatic, steep limestone cliffs; and there were few hotels, just low-lying beach cottages. The tsunami was also up to 6 meters at Phi Phi and as many as 4000 people died though the total could be far higher.

The date couldn’t be worse for such an event to occur; with thousands of people on holiday in the region and with very few people working in government offices, it was a recipe for disaster. Tourists from all over the world were vacationing in seaside resorts in Thailand, Indonesia, India, and elsewhere. Unplugged as they were, it was next to impossible to inform them or the residents of the region of the impending hazard.

Banda Aceh, the capital of the Aceh province of Sumatra, was much closer to the earthquake epicenter and people felt the shaking. However, they had very little time to do anything and there were no warnings about what was to come. And to be effective a warning would have had to have gone out immediately. About 20 minutes later three successive waves arrived, the first wave was smaller but the next two were so large that they reached as far as 4 km (2.5 miles) inland. The water was up to 12 m (40 feet) high in the city and the impact was truly devastating. Houses were totally destroyed, and wreckage, cars, and anything else were carried inland on this massive muddy wall of water and debris. Outside of the city, the wave was even higher, up to 30 meters (100 feet) high on the west coast of Aceh province where it traveled 3 miles inland. The highest measured wave reached 51 meters (167 feet) on a hillside near Banda Aceh. A total of 167,000 people are known to have died in Banda Aceh and many more were missing. The video shows footage of the devastating tsunami in Banda Aceh followed by Phuket. 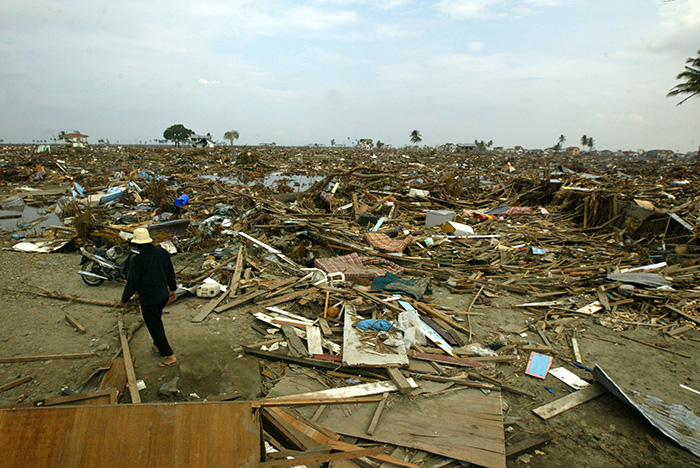 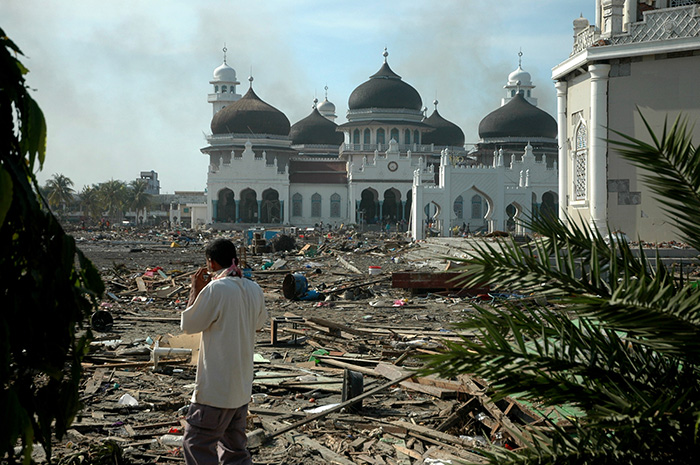 Earthquake near Sumatra 26.12.2004 makes a gigantic tsunami. First, destroyed the coast of Indonesia. The second victim of the devastating phenomenon was the island of Sri Lanka. And now the Tsunami steadily approaching the shallow Andaman Sea to nearby Thailand. Let’s take a look at the sequence of subsequent events in Thailand. Boxing Day: Tsunami 2004, Country by Country Thailand Although Thailand lies 3 times closer to the epicenter than the island of Sri Lanka, Thailand was hit by a tsunami 30 minutes later, approximately 2 hours after the underwater shock. (A red circle is drawn around the location of the epicenter of the 9.3 M Earthquake, arrows show the epicenter is 1056 miles from Sri Lanka and 310 miles from Thailand.) The wave was significantly slowed by the shallow Andaman Sea which also determined its behavior. The wave was the first to hit the islands of Surin and Similan. On the islands, there was first a massive retreat of the ocean. The subsequent wave came at incredible speed in the form of a rapidly rising water surface. The islands were flooded up to one meter, but the tsunami seems to have flown around Similar Island and has not caused much damage. The sad story took place on the islands of Surin. Staff at a nearby hotel encouraged tourists to explore the exposed seabed. When a wave came, like a swift flood, people rejoiced with the surf. They had no idea they were bathing in a tsunami. When the flow of water intensified, the wave washed away many people into the high seas. The tsunami chose the first victims. Subsequently, the wave struck the coast of Khao-Lake, where it caused tremendous damage. The wave was preceded by a huge retreat of water a few miles back, revealing the seabed. People went to explore the exposed seabed and had no idea they had fallen into a deadly trap. Suddenly a huge foamed water wall appeared on the horizon, making a thundering sound, like a storm approaching. The height of the racing water was 12 m (40 ft). The tsunami struck with great force all the resorts on the Khao Lak coast. The ruthless wave swept away all the people who could no longer escape from the sandy bottom and sinking sand. The tsunami was so destructive that there were no shots of the incoming tsunami from a tourist resort. However, in “The Impossible” movie, a tsunami coming to the resorts of Khao Lak was captured credibly. The movie tells the story of Henry Bennett’s family, which was broken up by a devastating tsunami. This incredible story of division and reunion really happened. Many families were not so lucky. Khao Law area was themes affected area in Thailand. The highest recorded tsunami run-up in Thailand measured 19.6 m (64.3 ft) at Ban Thing Dap, on the southwest tip of Ko Phra Thong Island. The area lies north of Khao Lake and the damage was enormous. South of Khao Lak, lies the island of Phuket, which was hit moments later. The tsunami here was smaller than in Khao Lake and came in two consecutive waves that would look like surf waves. The reason for the difference seems to have been caused by the local bathymetry off Phuket Island. The first wave was smaller and had a height of about 4m (13 ft) and quickly flooded tourist resorts. The second wave came in ten minutes and had a height of about 9m (30 ft). In the second part of the fourth episode, we will visit Phi-Phi, Koh-Lanta, and other smaller islands.

Now let’s take a step back and understand the megathrust earthquake that generated the tsunami. Remember a megathrust earthquake is one that occurs in a subduction zone where one plate is descending under another. These types of motions tend to cause a lot of strain to build up and thus then produce massive amounts of energy when it is released, the fault ruptures, and the crust moves or slips. The slip can encompass the movement of massive areas, and involve different motions on either side of the plate boundary. In terms of tsunami genesis, as we have learned, the critical part of the motion is that the megathrust often causes rapid upward motion of the crust (and downward motion in some areas). And, of course, these fault zones are almost all under the ocean.

The 26 December 2004 Sumatra Andaman Earthquake took place when the Indian Plate is subducting beneath the Sunda Plate, actually, a small microplate belonging to it, the Burma microplate. 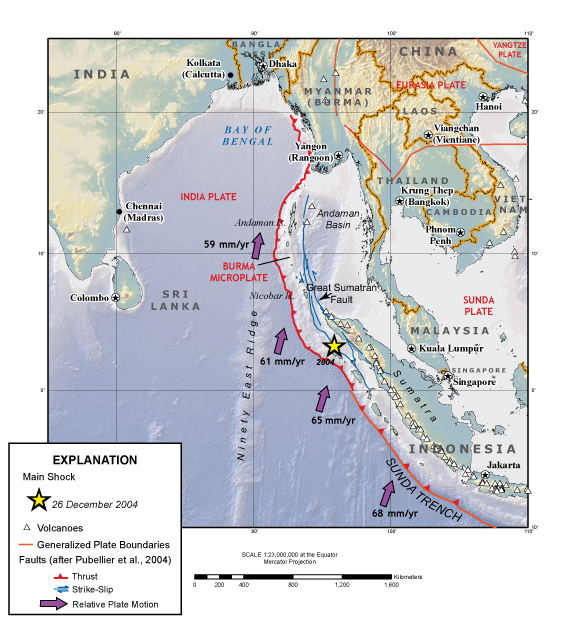 The earthquake was the third-largest quake ever measured with a magnitude of about 9.1. Two other notable elements of the quake were that it involved eight to ten minutes of shaking which is a very long time compared to most quakes. The rupture took place in several stages with a total of 15 meters or 50 feet of movement over a length of 1500 km (900 miles) and the area of slip was truly massive, about the size of California (as seen in the image below). 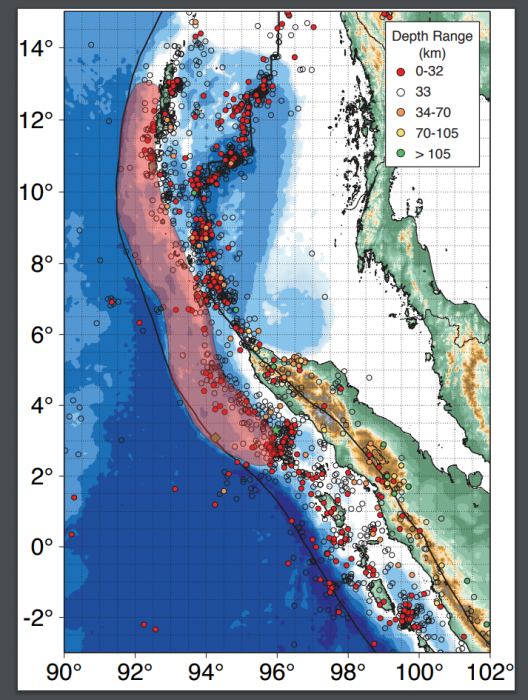 The approximate location of the rupture zone is shown with a large red box and the location of epicenters of the main earthquake and aftershocks.
Credit: Courtesy of Charles Ammon

The rupture actually involved a complex set of faults with some very rapid upward motion which triggered the tsunami. The initial rupture occurred above the earthquake epicenter and then propagated to the north at a speed of 2km/sec or 1.2 m/sec (see image below). The fault that moved was up to 50 km (30 miles) deep and the total amount of motion at the epicenter was about 20 meters or 65 feet. The megathrust motion caused the Burma microplate to move upwards rapidly.

The displacement of rock surrounding the inter-plate thrust is shown in the cross-section for the 2004 Sumatra-Andaman earthquake.
Credit: USGS (Public Domain)

The upward motion was enough to make new islands. The animation below shows how the crust moved upwards in propagation from the south toward the north. It is very easy to see how this motion generated a tsunami. The second animation shows how tsunami waves spread out from the area of upward motion. You can see that the waves that hit Banda Aceh in the south of the map came from a different part of the plate boundary from those that hit Thailand in the north. 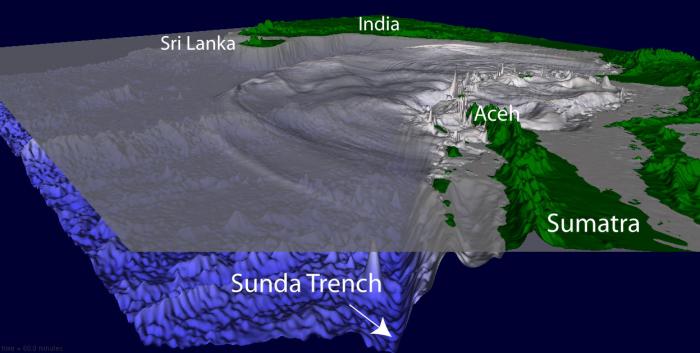 This animation shows a model of vertical seafloor displacement caused by the December 26, 2004, Sumatra-Andaman earthquake. Both the propagation of the rupture front northward and an exaggeration of the vertical movement of the seafloor are shown. The water has been removed in this animation. The seafloor is colored red where the seafloor moves upward and colored blue where it moves downward.
Credit: USGS (Public Domain)

The earthquake was so large and the plate motion so significant that the 2004 Sumatra-Andaman earthquake is thought to have triggered other earthquakes in a process known as dynamic including the deadly 2008 Sichuan earthquake in China that killed 69,000 people.

General diagram of an oceanic subduction zone. Sumatra and the Andaman Islands are part of an island arc.
Credit: USGS Pacific Coastal and Marine Science Center, Figure is taken from the online edition of This Dynamic Earth. 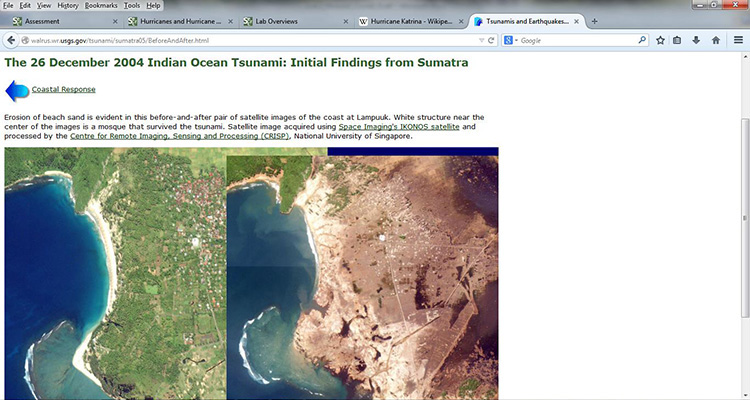 Screen capture from the USGS. Lampuuk on the island of Sumatra before and after the Banda Aceh earthquake on Boxing Day, 2004 (December 26, 2004). Lampuuk is located on the northwesternmost peninsula of the island. The image on the left shows the area prior to the tsunami and, on the right, the area after the tsunami. Tsunami waves swept from west to east across this region in complex patterns. Significant infrastructure including roads, agricultural areas, and residential and beachfront areas was obliterated during this event. Moreover, significant erosion pushed the shoreline inland and resulted in subsidence that contributed to continued land loss after the tsunami.
Credit: USGS: Tsunamis and Earthquakes

After examining the diagrams and maps on the USGS’s Pacific Coastal and Marine Science Center website and watching the animation video of the modeled tsunami waves that were generated by the earthquake. Take some time to think about what you just learned, then consider how you would answer the questions on the cards below. Click "Turn" to see the correct answer on the reverse side of each card.

‹ Investigating The Geology & Impacts of Recent Tsunamis up 2011 Japanese Earthquake ›