The Maldive Islands in the Indian Ocean and other low-lying island nations such as the Marshall Islands and others in the Pacific Ocean all face extreme sea level rise risk and are addressing the problem in a variety of ways. The Maldives, the Marshall Islands, and several other island nations are made up of numerous coral atolls, each including several islands of varying sizes. All the islands are very low profile, with elevations usually of no more than two meters. They are currently facing multiple sustainability issues due to sea level rise, with some residents seeing only a future of migration away from their island homes.

The simple issue of frequent tidal flooding and accompanying shoreline erosion and loss of livable land area is compounded by the more complex problems related to salt water intrusion into the freshwater lenses that the islanders depend upon for their drinking water. Chapter 8 of Jeff Goodell’s book, “The Water Will Come” discusses in detail the issues of the Marshall Islands. He says of the groundwater supply: “The problem is, as seas rise, the salt water pushes up from below, leaving less and less room for freshwater (which, being more buoyant, rides on top of the salt water). In addition, as the seas rise, flooding from storm surges is likely to become more common. When an atoll is inundated, the salt water can seep into the freshwater lens, contaminating it. It can take years before it is suitable for drinking again." (Goodell, 2017).

Meanwhile, the Maldive Islands, which comprise 1,200 islands on 26 atolls, face similar challenges. In fact, the capital of the Maldives, Malé, sits on the most densely populated island in the world. As the image below illustrates, the whole island is completely developed. Drinking water is desalinated by reverse osmosis using brackish groundwater, which is pumped from 50-60 meter wells. Malé is the center of all commercial activities of the Maldives. The main industry of the Maldives is tourism, comprising 28% of the nation’s GDP. According to the United Nations Development Programme (UNDP) “Given that these reefs support both the country’s tourism and fisheries industries upon which the people depend almost exclusively, climate change is a profound threat to its very economic base.”

Understandably, the government leaders of these island nations have a great interest in how the world is addressing climate change, since they are on the front line in the sea level rise battle, with everything to lose, while contributing very little to the global anthropogenic causes of climate change. One approach of the presidents and prime ministers of these island nations has been to work hard to get the attention of the rest of the world and push for policies that reduce greenhouse gas emissions. This has had limited success and caused plenty of frustration. Meanwhile, adaptation policy options are limited. The islands are small and low in elevation, while economic opportunities for residents are limited and affected by climate change. Therefore, migration is often the best adaptation option. A United Nations report analyzed the migration patterns and modeled migration and population projections to 2055 for several Pacific Island nations. The study found that for Tuvalu, which has a current population of a little less than 11,000 people, 70% of households surveyed felt that migration would be necessary if sea level rise impacts worsened and that 15% of the population had migrated internationally between 2005 and 2015. The Modeling indicated that the migration rate (both internally and internationally) will roughly double by 2055. The reasons for migration included climate change-related impacts but also economic needs, which can be related as climate change affects agriculture and fisheries. So, from this information, we can see that sea level rise is one of a complex of related stressors for the people of island nations like Tuvalu.

Reference: United Nations Economic and Social Commission for Asia and the Pacific Climate Change and Migration in the Pacific: Links, attitudes, and future scenarios in Nauru, Tuvalu, and Kiribati. 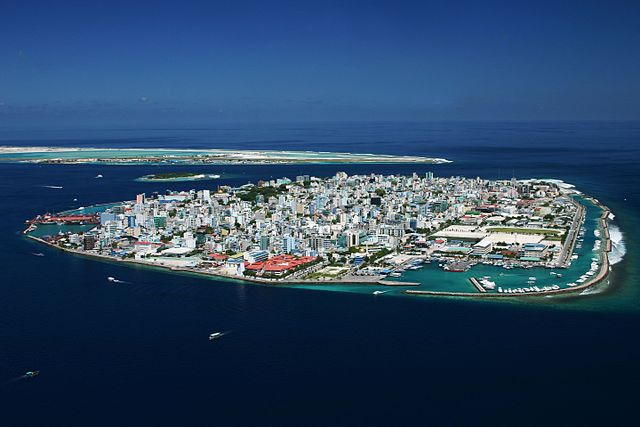 Aerial view of the whole of Malé proper on the eponymous island as seen from the southwest.
Credit: By Shahee Ilyas [GFDL or CC-BY-SA-3.0, from Wikimedia Commons]

International Politics of Sea Level Rise – The Maldives and Kiribati

The New Scientist article, On front line of climate change as Maldives fights rising seas discusses recent developments in the efforts in the Maldives to plan for the future. The current president of the Maldives is pushing for rapid land reclamation using sediment dredged from existing atolls and pumped to create new islands as sea levels rise. To fund this expensive method of land reclamation, the Maldives government is negotiating a lucrative deal with the Saudi government to lease the Faafal Atoll for shipping security purposes and tourism. While proponents tout this method as a simple solution that will avoid migration away from the Maldives, there are many resulting conflicts. Thousands of residents would actually be displaced to other islands as a result of this dredging project, raising societal concerns. Also, the deposition of sediment onto coral reefs smothers and damages the reefs themselves.

Meanwhile, in Kiribati, a similar scenario is playing out. As reported in the Guardian: Kiribati’s president’s plans to raise islands in the fight against sea-level rise, the newly elected president of Kiribati is focusing heavily on increasing island elevation using dredging and construction of causeways to connect islands. There are international politics and security questions being raised about these plans, including concerns from the U.S. that China may have strategic and military interests in the region and the U.S. naval base in Hawaii is only 2,000 km (1,243 miles away). This complex issue is developing, so stay aware.

These examples reveal the extreme lengths to which the low-lying island nations of the world must go if they are to survive a future of rising sea levels. The structural mitigation measures discussed above may also need to be considered a short-term solution to prolong the sustainability of communities on these islands. Depending on the future rates of sea level rise, conditions may prove untenable in the 22nd century or before, if ways to sustain essentials such as freshwater supplies for human consumption and agriculture cannot be maintained.

The National Geographic article, Will Pacific Island Nations Disappear as Seas Rise? Maybe Not provides a very clear description of the situation for the island nations, with the prime minister of the island nation of Tuvalu pleading his case to the United Nations for a nation in danger of disappearing due to sea level rise. The article details an interesting contribution to the conversation about the future of coral atoll islands from coastal geomorphologist Paul Kench, of the University of Auckland's School of Environment, and colleagues in Australia and Fiji, who have been studying how coral atoll islands respond to sea level rise. Their research suggests that, left in their natural state, coral atolls can grow in elevation and keep pace with sea level rise, when left unaltered by human activity. They have measured this growth and reported that only 20% of the islands studied decreased in size during the time period considered. The islands that are heavily populated and altered by human infrastructure, not surprisingly, are the ones deemed unsustainable in terms of ability to naturally keep up with environmental changes, while sparsely populated, less developed islands can more easily keep up with the pace of sea level rise with natural processes.

Regarding research conducted by Paul Kench and other researchers, the article states: “They found that reef islands change shape and move around in response to shifting sediments, and that many of them are growing in size, not shrinking, as sea level inches upward”. And “Their analysis, which now extends to more than 600 coral reef islands in the Pacific and Indian Oceans, indicates that about 80 percent of the islands have remained stable or increased in size (roughly 40 percent in each category)”.