In the previous sections we introduced the idea of cultural landscapes and discussed their significance and to read them. Our approach so far has been to talk about cultural landscapes as a combination of setting, reflection, and co-constructor of our everyday actions and interactions. Most of the images in the previous sections depicted relatively clean and orderly spaces that many of you may find pleasant.

Yet, as we hinted at in section 6.4, many of the landscapes we interact with (in some cases, on a regular basis) show signs of what sociologists and criminologists refer to as disorder: untended lawns or medians, graffiti, cracked or broken sidewalks or curbs, houses with missing or boarded-up windows, litter strewn across the ground, streets riddled with potholes, buildings with peeling or flaking paint, vandalism, rotting woodwork and rusty ironwork—and the list goes on. In addition, you might sometimes observe activity in the landscape that suggests disorder: loitering, panhandling, public drinking or drug use, or groups of unsupervised youth wandering about. 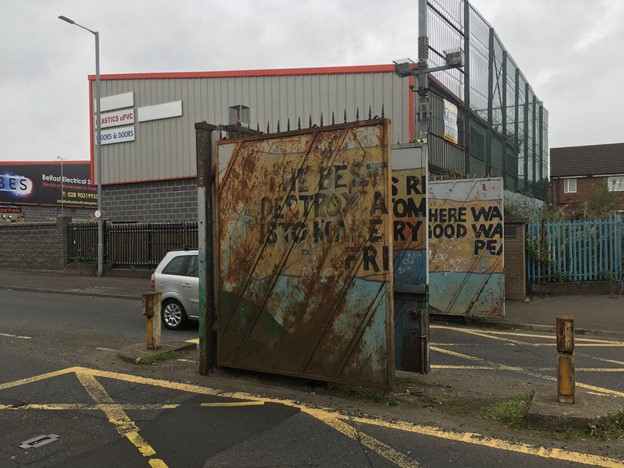 Fig. 6.25: Belfast, Northern Ireland. These gates are part of a peace line in the city. Note the old graffiti covering one side.
Credit: Leanne Sulewski © Penn State University is licensed under CC BY-NC-SA 4.0. 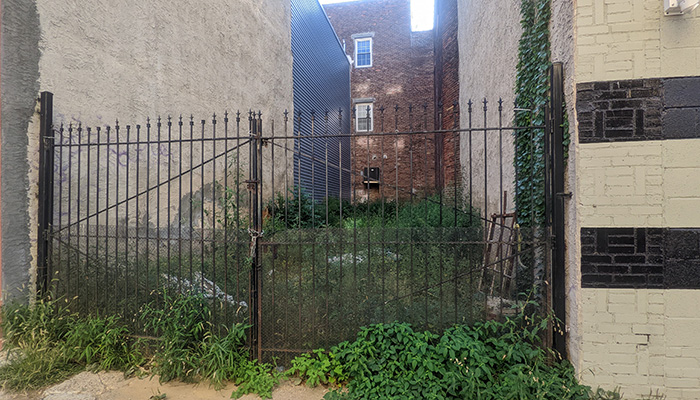 These signs of physical and social disorder on the landscape may lead people to perceive the landscape as unsafe. As Chappell and company argue, “some research indicates that neighborhood disorder…is a better predictor of fear than serious crime” (2011, p. 522). We can reinterpret this statement from a geographical perspective thus: people read landscapes as part of their daily habits (often without realizing it); landscapes with visible signs of disinvestment are disorderly; and disorderly landscapes are often perceived as dangerous, regardless of whether or not they are actual sites of crime.

The presence of physical and social disorder in the landscape have led to at least two important (and related) theoretical interventions in criminal justice: crime prevention through environmental design (CPTED) and broken windows.

CPTED emerged in the early 1970s when criminologist C. Ray Jeffrey and architect and urban planner Oscar Newman independently published books that pointed to the environment as a contributing factor of crime. Their work rested in part on a foundation created by urbanist Jane Jacobs. In her book 1961 Death and Life of Great American Cities (which is still widely read today), argued that in order for cities to feel vibrant, it is necessary to have a clear delineation between public and private space, to have “eyes on the street”—everyday people whose presence constitutes community but also surveillance, and an environment that is built to facilitate that surveillance.

Building on these ideas, Newman proposed the idea of defensible space—a space that is designed to enable individuals to contribute to their own safety through four design elements:

Together, these elements theoretically create a sense of ownership, community, and responsibility for spaces (Cozens & Love, 2015). The argument goes that in well-designed (or defensible) spaces, people who are there for legitimate reasons feel safe, while people who are inclined to commit crimes feel uncomfortable doing so.

CPTED has been championed by architects and urban planners, and has been refined over the years to promote a holistic approach to designing the built environment in ways that promote community inclusion. Contemporary CPTED models incorporate additional elements and contextualize them in broader social systems. Principles of CPTED have diffused from the US throughout North America, and have been embraced by government agencies in Europe, Australia, Asia, and South Africa, among other places (Cozens & Love, 2015).

Given the increasing complexity of CPTED, it is difficult to fully assess its effectiveness in crime prevention (Cozens & Love, 2015), yet the results are promising. A meta-analysis of CPTED (Ceccato, 2020) has found considerable support for the efficacy of its design elements. In particular, attention to lighting, the use of surveillance cameras, and maintenance of spaces seem to promote increased use of public spaces, reduced fear of crime, and reduced incidents of crime. This is evident in MacDonald and Branas’s (2019) Philadelphia LandCare case study, a project in Philadelphia’s Kensington neighborhood that converted vacant lots into pocket parks. The investigators found significant reductions across gun assaults, shootings, and nuisance crimes, with particularly strong results in neighborhoods below the poverty line.

In 1982, political scientist James Q. Wilson and criminologist George Kelling presented this idea as the basis for their theory of broken windows in an article in The Atlantic. Their idea, in brief, was that untended social and physical disorder on the landscape would cause the informal social controls that keep communities safe (i.e., through social cohesion) to diminish. As people begin to see a landscape as disorderly, they are less likely to engage with others in the landscape, leading to a spiral of fear and social disinvestment:

At this point it is not inevitable that serious crime will flourish or violent attacks on strangers will occur. But many residents will think that crime, especially violent crime, is on the rise, and they will modify their behavior accordingly. They will use the streets less often, and when on the streets will stay apart from their fellows, moving with averted eyes, silent lips, and hurried steps. (Wilson & Kelling, 1982, p. 31)

From there, they argue, the landscape becomes open to crime—that, in effect, perception becomes reality.

All of this may sound academic, but it had real-world implications. Wilson and Kelling’s article was the catalyst for a new direction in policing: disorder policing. In its harshest form, disorder policing manifests as the kind of ‘zero-tolerance’ that was first instituted in New York City in the 1990s during the Guiliani administration and has since been exported to cities in Iraq, Brazil, Norway, Australia, and Colombia among others (for more on the history of its implementation, see Mitchell, 2010). This style of policing targeted ‘quality of life’ infractions such as loitering, littering, vandalism, and other low-stakes behaviors.

Disorder policing, and zero-tolerance policing in particular, is controversial, and its effectiveness is mixed at best. A decrease in crime through the 1990s and into the 2000s led some policymakers to hail zero-tolerance policing in New York City as a success, though several scholars have pointed out a number of other factors, such as a reduction in the use of crack cocaine, economic growth, and changes in age structure may also account for the decline in crime rates (Braga et al., 2015; Diniz & Stafford, 2021). Others point out that it is difficult to tell which successes are the result of disorder policing as opposed to community-based approaches, as many policing strategies informed by broken windows theory also tend to include problem-solving, place-oriented, or deterrence components (Weisburd et al., 2015).

Part of the problem with measuring the effectiveness of disorder policing is that it’s not clear which kinds of disorder are good indicators of the development of crime. For example, Diniz and Stafford (2021) found that graffiti (a common measure of physical disorder) had no clear spatial relationship to a variety of crimes (personal crimes, property crimes, sex crimes, gun violence, or drug trafficking) in downtown Belo Horizonte, Brazil, despite an aggressive zero-tolerance policing campaign in the city.

Some scholars note that there have been too few studies on disorder policing to support the claims of success (see, e.g., Weisburd et al., 2015), and existing studies provide a mixed bag of results. In a meta-analysis of 30 tests of disorder policing, Braga and colleagues found that “disorder policing strategies generate noteworthy crime control gains” (2015, p. 580) across various measures of crime—but that the type of strategy matters. They found overall that aggressive zero-tolerance approaches that respond to specific behaviors were not effective, while place-based and community problem-solving approaches did significantly reduce crime.

Yet Wilson and Kelling’s (1982) theory is not a theory of crime reduction. It is a theory that uses elements of cultural landscapes to prevent a place from becoming a site of crime by preventing the fear that leads to the erosion of informal social controls, rather than a theory of how to respond to existing crime hotspots. Taking a closer look at the studies reviewed by Braga and colleagues (2015), Weisburd and company (2015) found that all but one focused on crime reduction rather than fear reduction—and the one that did focus on fear reduction found that disorder policing did not significantly reduce fear. They further note that the model suggested by Wilson and Kelling may take years to develop, and it is unclear just how much time it would take for disorder in the landscape to translate to the kinds of effects they predict.

Regardless, people’s perceptions of the landscape do impact their perceptions of safety and security. Chappell and colleagues (2011) found that when accounting for both social and physical disorder, social disorder has no significant impact on quality of life—but physical disorder does, even though it is not necessarily an indicator of crime. These perceptions can impact our daily activities, including the routes we choose to take and the destinations we visit, as well as the routes and places we avoid due to fear.

With all of this in mind, it is important to take stock of interactions of landscape and security:

In short, the ways that we perceive cultural landscapes has an impact on quality of life, and policymakers are aware of this. Interventions that target human security based on landscape factors merit careful consideration.

Ceccato, V. (2020). The architecture of crime and fear of crime: Research evidence on lighting, CCTV and CPTED features. In V. Ceccato and M. K. Nalla (Eds.), Crime and fear in public places: Towards safe, inclusive and sustainable cities (pp. 38-71). Routledge.