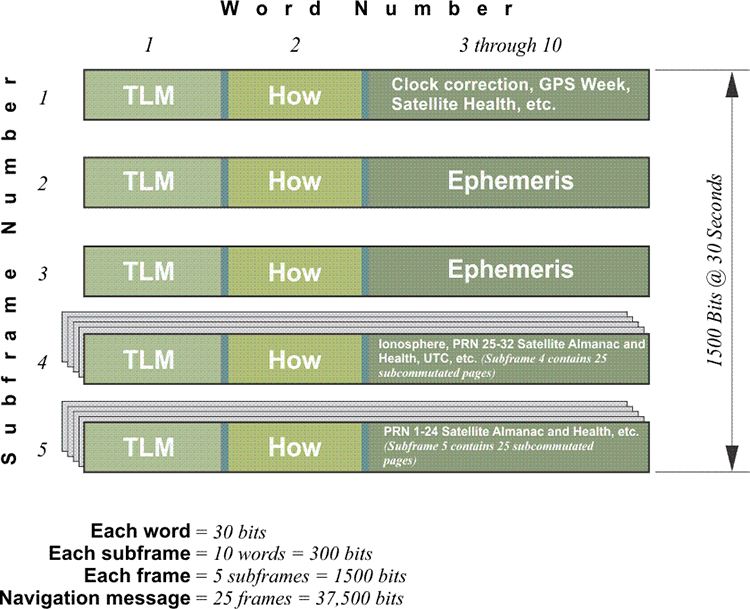 This is the primary vehicle for communicating the NAV message to GPS receivers. The NAV message is also known as the GPS message. It includes some of the information the receivers need to determine positions. Today, there are several NAV messages being broadcast by GPS satellites, but we will look at the oldest of them first. The legacy NAV (NAV) message continues to be one of the mainstays on which GPS relies. The NAV code is broadcast at a low frequency of 50 Hz on both the L1 and the L2 GPS carriers. It carries information about the location of the GPS satellites called the ephemeris and data used in both time conversions and offsets called clock corrections. Both GPS satellites and receivers have clocks on board. It also communicates the health of the satellites on orbit and information about the ionosphere. The ionosphere, along with the troposphere, is a layer of atmosphere through which the GPS signals must travel to get to the user. It includes data called almanacs that provide a GPS receiver with enough little snippets of ephemeris information to calculate the coordinates of all the satellites in the constellation with an approximate accuracy of a couple of kilometers. The Navigation code, or message, is the vehicle for telling the GPS receivers some of the most important things they need to know. Here are some of the parameters of its design.

The entire Navigation message, the Master Frame, contains 25 frames. Each frame is 1500 bits long and is divided into five subframes. Each subframe contains 10 words and each word is comprised of 30 bits. Therefore, the entire Navigation message contains 37,500 bits and at a rate of 50 bits-per-second takes 12½ minutes to broadcast and to receive on a completely cold start. In other words, getting the whole thing is not instantaneous. It does take a bit of time for the receiver to update its Navigation Message.

In the five sub-frames of the legacy Navigation Message. TLM stands for telemetry. HOW stands for handover word. Over on the right-hand side in the illustration, you see the clock correction, GPS satellite health, et cetera, in sub frame one. Two and three are devoted to the ephemeris. In four and five, you see ionosphere, and then PRN (Pseudo Random Noise) satellite numbers and almanac are mentioned.  The PRN term is used because the GPS signals that the receiver uses for positioning appear to be random noise, but in fact, the signal is pseudo (false) random noise because in truth, the signals are very carefully designed and consistent. They are not noise at all. They just seem to be irregular. The PRN numbers 25 to 32 in sub-frame number four mean that satellite's almanacs from number 25 to number 32 are to be found there.  In subframe five the PRNs from 1 to 24, those satellites have their almanacs, in other words, a little bit of their ephemerides. You might wonder why they are there. This is that identification system. In other words, when a receiver acquires the Navigation Message from one satellite - embedded in that message - there's a bit of information, just a bit, that will tell the receiver where it can find the rest of the entire constellation in the sky. This helps it acquire the additional satellites after it's got the first one. That's what the satellite almanac does.

‹ One-way Ranging up The Control Segment ›