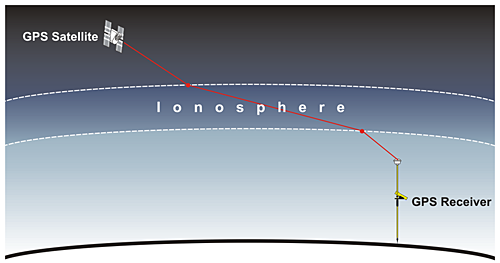 Subframe 4 addresses atmospheric correction. As with subframe 1, the data there offer only a partial solution to a problem. The Control Segment’s monitoring stations find the apparent delay of a GPS signal caused by its trip through the ionosphere through an analysis of the different propagation rates of the carrier frequencies broadcast by GPS satellites, L1, L2 and L5. These frequencies and the effects of the atmosphere on the GPS signal will be discussed later. For now, it is sufficient to say that a single-frequency receiver depends on the ionospheric correction in subframe 4 of the NAV message to help remove part of the error introduced by the atmosphere, whereas a receiver that can track more than one carrier has a bit of an advantage by comparing the differences in the frequency dependent propagation rates.

As the illustration indicates, the signal from the GPS satellite appears to slow down as it goes through the ionosphere. The atmospheric correction has been uploaded to the satellite from the Control Segment. The Control Segment can quantify the slowing because the tracking station is at a known point.

‹ Ephemerides up The Almanac, Time to First Fix and Satellite Health ›