The Almanac, Time to First Fix and Satellite Health 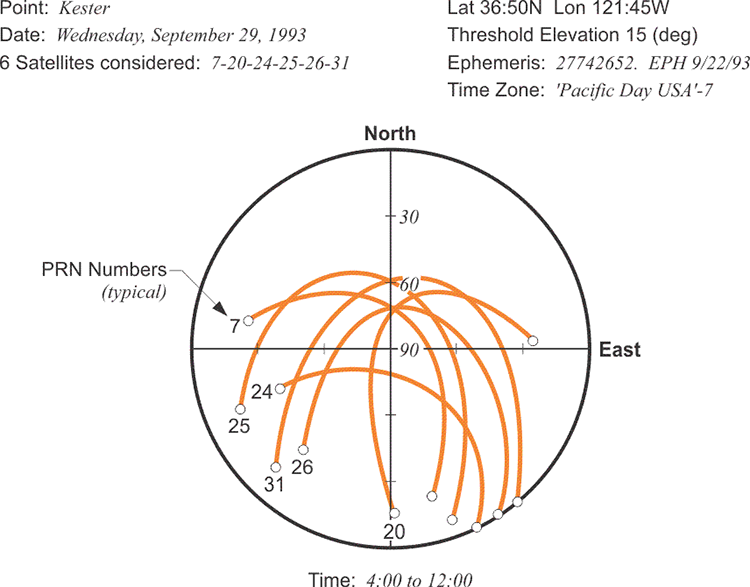 As mentioned briefly earlier, the information in the almanac in subframes 4 and 5 tells the receiver where to find all the GPS satellites. Subframe 4 contains the almanac data for satellites with pseudorandom noise (PRN) numbers from 25 through 32, and subframe 5 contains almanac data for satellites with PRN numbers from 1 through 24. The Control Segment generates and uploads a new almanac every day to each satellite, at least every six days, but typically on a daily basis.

While a GPS receiver must collect a complete ephemeris from each individual GPS satellite to know its correct orbital position, it is convenient for a receiver to be able to have some information about where all the satellites in the constellation are by reading the almanac from just one of them. The almanacs are much smaller than the ephemerides because they contain coarse orbital parameters and incomplete ephemerides, but they are still accurate enough for a receiver to generate a list of visible satellites at power-up. They, along with a stored position and time, allow a receiver to find its first satellite.

If a receiver has been in operation recently and has some left over almanac and position data in its non-volatile memory from its last observations, it can begin its search with what is known as a warm start. A warm start is also known as a normal start. In this condition, the receiver might begin by knowing the time within about 20 seconds and its position within 100km or so, and this approximate information helps the receiver estimate the range to satellites. For example, it will be able to restrict its search for satellites to those likely above its horizon rather than wasting time on those below it. Limiting the range of the search decreases the time to first fix (TTFF). It can be as short as 30 seconds with a warm start.

On the other hand, if a receiver has no previous almanac or ephemeris data in its memory, it will have to perform a cold start, also known as a factory start. Without previous data to guide it, the receiver in a cold start must search for all the satellites without knowledge of its own position, velocity, or the time. When it does finally manage to acquire the signal from one, it gets some help and can begin to download an almanac. That almanac data will contain information about the approximate location of all the other satellites. The period needed to receive the full information is 12.5 minutes.

The time to first fix (TTFF) is longest at a cold start, less at warm, and least at hot. A receiver that has a current almanac, a current ephemeris, time and position can have a hot start. A hot start can take from 1/2 to 20 seconds.

Estimating how long each type of start will actually take is difficult; overhead obstructions interrupting the signal from the satellites, the GPS signals reflecting from nearby structures, etc., can delay the loading of the ephemeris necessary to lock onto the satellite's signals.

Subframe 1 contains information about the health of the satellite the receiver is tracking when it receives the NAV message and allows it to determine if the satellite is operating within normal parameters. Subframes 4 and 5 include health data all of the satellites, data that is periodically uploaded by the Control Segment. These subframes inform users of any satellite malfunctions before they try to use a particular signal. The codes in these bits may convey a variety of conditions. They may tell the receiver that all signals from the satellite are good and reliable or that the receiver should not currently use the satellite because there may be tracking problems or other difficulties. They may even tell the receiver that the satellite will be out of commission in the future; perhaps it will be undergoing a scheduled orbit correction. GPS satellites' health is affected by a wide variety of breakdowns, particularly clock trouble. That is one reason they carry multiple clocks.

The almanac in sub frames four and five tell the receiver where to find the satellites. The little truncated ephemerides in the almanac help it do that. There is also information about the satellite health in the Navigation Message. GPS satellites operate in a rather hostile environment, and if they're having trouble, i.e., if some of the clocks are not operating within acceptable parameters, the health data allows the receiver to have that information. For example, a receiver might receive information that a satellite is unhealthy and shouldn't be used in the positioning.