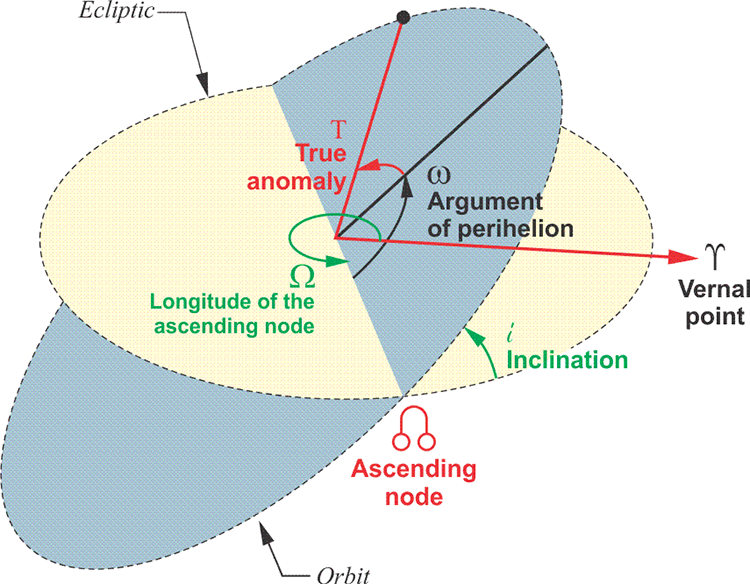 Another example of time-sensitive information is found in subframes 2 and 3 of the NAV Message. They contain information about the position of the satellite, with respect to time. This is called the satellite’s ephemeris. The ephemeris that each satellite broadcasts to the receivers provides information about its position relative to the earth. In other words, these are the coordinates of the satellite in space at the instant the Control Segment uploads the ephemerides to the Navigation Message for each individual satellite. Most particularly, it provides information about the position of the satellite antenna's phase center. The ephemeris is given in a right ascension (RA) system of coordinates. There are six orbital elements; among them are the size of the orbit, that is its semimajor axis, a, and its shape, that is the eccentricity, e. However, the orientation of the orbital plane in space is defined by other things, specifically the right ascension of its ascending node, Ω, and the inclination of its plane, i. These parameters along with the argument of the perigee, ω, and the description of the position of the satellite on the orbit, known as the true anomaly, provides all the information the user’s computer needs to calculate earth-centered, earth-fixed, World Geodetic System 1984, GPS Week 1762 (WGS84 [G1762]) coordinates of the satellite at any moment. Another example of time-sensitive information is found in subframes 2 and 3 of the Navigation message. They contain information about the position of the satellite, with respect to time. The broadcast ephemeris, however, is far from perfect. It is expressed in parameters named for the seventeenth century German astronomer Johann Kepler. The ephemerides may appear Keplerian, but in this case, the orbits of the GPS satellites deviate from nice smooth elliptical paths because they are unavoidably perturbed by gravitational and other forces. They are affected by lots of biases.   Therefore, the orbits change with time so their actual paths through space are found in the result of least-squares, curve-fitting analysis. The accuracies of both the broadcast clock correction and the broadcast ephemeris deteriorate with time so the ephemeris needs to be updated periodically to keep it within the accuracy required to get good positions on the Earth's surface. As a result, one of the most important parts of this portion of the NAV message is called IODE. IODE is an acronym that stands for Issue of Data Ephemeris, sort of a time stamp on the ephemeris that the receiver gets from the navigation message, and it appears in both subframes 2 and 3. Remember, the satellites are the control points from which the distances must be derived.