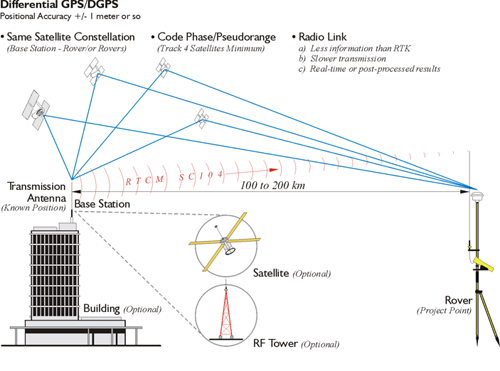 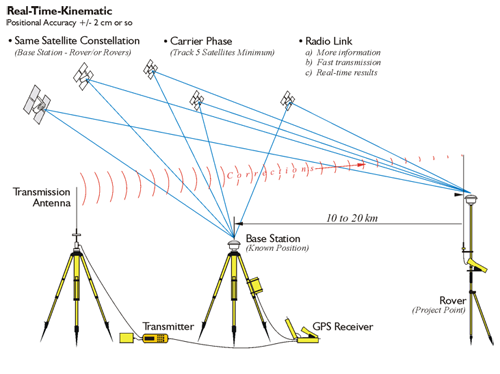 Errors in satellite clocks, imperfect orbits, the trip through the layers of the atmosphere, and many other sources contribute inaccuracies to GPS/GNSS signals by the time they reach a receiver. Real-time positioning is built on the idea that, with the important exceptions of multipath and receiver noise, these GPS/GNSS error sources are correlated. Nevertheless, the errors are variable, so the best to way to correct them is to monitor them as they happen. A good way to do this is to set up a GPS/GNSS receiver on a station whose position is known exactly, a base station. This base station receiver’s computer can calculate its position from satellite data, compare that position with its actual known position, and find the difference. The resulting error corrections can be communicated from the base to the rover over a data link. It works well, as long as the base station monitors them all the time, at least all the time the rover receiver or receivers are working. While this is happening, the rovers move from place to place collecting the points whose positions you want to know relative to the base station, which is the real objective after all. 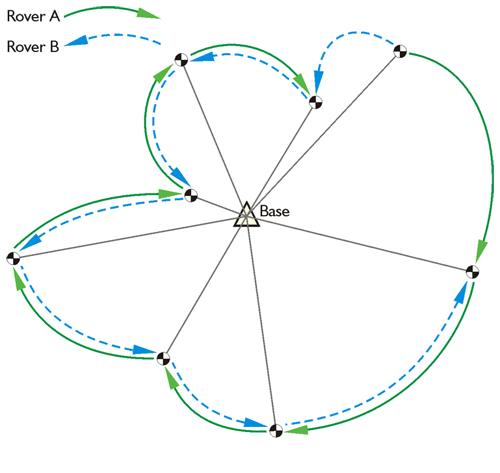 Such real-time surveying is essentially radial. There are advantages to the approach. The advantage is a large number of positions can be established in a short amount of time with little or no planning. The disadvantage is that there is little or no redundancy in positions derived, each of the baselines originates from the same control station. If there's an error in one of these radial base lines, it would be tough to catch it because there's no real redundancy.  Redundancy can be incorporated, but it requires repetition of the observations so each baseline is determined with more than one GPS/GNSS constellation. One way to do it is to occupy the project points, the unknown positions, successively, with more than one rover. It is best if these successive occupations are separated by 4 hours and not more than 8 hours so the satellite constellation can reach a significantly different configuration.  However, a re-occupation as little as 1/2 hour later can yield good results. Another way is to move the base to another known point. Then if you have vectors from another base into these points, you have a check. This approach allows a solution to be available from two separate control stations. Obviously, this can be done with re-occupation of the project points after one base station has been moved to a new control point, or a two base stations can be up and running from the very outset and throughout of the work as would be the case using two CORS stations. An advantage to continuously operating reference station network is that since those bases are operating simultaneously and all the time, it's possible to download the positions from more than one base and process your new position based on these continuously operating reference stations and have some redundancy.

A more convenient but less desirable approach is to do a second occupation almost immediately after the first. The roving receiver’s antenna is blocked or tilted until the lock on the satellites is interrupted. It is then re-oriented on the unknown position a second time for the repeat solution. This does offer a second solution, but from virtually the same constellation.

Project points that are near one another but far from the control station should be directly connected with a baseline to maintain the integrity of the survey. Finally, if the base receiver loses lock and it goes unnoticed, it will completely defeat the radial survey for the time it is down.