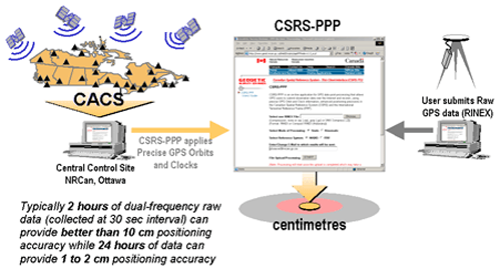 Real-time or static differential GPS and differential GNSS have long been the preferred methods of data processing for surveyors and geodesists. Typically, the differential processing technique depends on one of at least two receivers standing at a control station whose position is known, the base. It follows that the size of the positional error of the base receiver is knowable. By finding the difference between the biases at the base and the biases at the rover, the positional error at the other end of the baseline can be estimated. Through the process of differencing, corrections are generated which reduce the three-dimensional positional error at the unknown point by reducing the level of the biases there. The approach can generally provide up to sub-meter position from single frequency pseudorange observations. Differentially processed carrier phase observations can typically reach accuracies of a few centimeters. These facts have led to the construction of networks of continuously operating reference (CORS) stations on control stations and around the world to support differential processing. There are many regional networks such as the Australian Fiducial Network (AFN) administered by the Australian Surveying and Land Information Group (AUSLIG), EUREF with its EUREF Permanent Network (EPN), the Continuously Operating Reference Stations (CORS) administered by the NGS, AFREF, NAREF, SIRGAS, as well as many commercial networks, and the list is constantly growing.

Some of these networks stream of real-time differential corrections to users. These real-time networks (RTNs) support the now well-known real-time kinematic (RTK) methods. The convenience of these RTNs has contributed substantially to the extraordinary expansion of relatively high accuracy GPS applications that rely on differential processing. However, there is an alternative in both real-time and post-processed work. It is known as Precise Point Positioning (PPP)

There is such as source. It contains much more accurate data about the satellites' orbits and the clocks, and that enables single point positioning to achieve higher accuracy and thereby presents some advantages over differential methods. For example, the user need not establish control stations or have access to corrections from reference stations operated by others. It ameliorates the limits on the baseline lengths imposed by differential processing, and the solution is global. It can work anywhere in the world. The PPP corrections are expressed in a global reference frame, the International Terrestrial Reference Frame 2008 (ITRF08), which offers better overall consistency than does a local or regional solution.

The International GNSS Service (IGS) is collaboration between more than 200 organizations in more than 80 countries. As a public service, it collects and archives GPS and GLONASS data from a worldwide network of more than 300 continuously operating reference stations. It formulates precise satellite ephemerides and clock solutions from these data. Up to eight IGS analysis centers are involved in the processing, and then, IGS freely distributes the results. In other words, this data allows users to process their observations using the positions of the satellites and the state of the clocks derived from the period of time the satellites were being tracked. That period of time includes the moment the user actually made the observations. Since this data reflects the precise position of the satellites and clock offsets during the actual measurements, it stands to reason that it is more precise than the broadcast ephemeris and clock corrections can be. There are several categories of this data available.

This post-computed data has been available for more than a decade, and there are free PPP post-processing services. Users may upload their data files to these services websites (in the RINEX format) and be served automatically computed GNSS receiver positions at the centimeter level. The services do require that the submitted data be derived from long observation times.

In the United States, the National Oceanic and Atmospheric Administration (NOAA) and, more specifically, the National Geodetic Survey (NGS) have worked with IGS to provide accurate GPS satellite ephemerides, or orbits.

Recently, near real-time information has also become available from IGS. This real-time service (RTS) was created in partnership with other organizations, specifically Natural Resources Canada (NRCan), the German Federal Agency for Cartography and Geodesy (BKG), and the European Space Agency’s Space Operations Centre in Darmstadt, Germany (ESA/ESOC). The RTS’s precise ephemeris and clock data is available on the internet every 25 seconds via an open source protocol known as the Network Transport of RTCM (NTRIP) which has been an RTCM standard for the real time collection and distribution of GNSS information since 2004.

These precise satellite orbits and clocks along with code and phase observations from a dual-frequency receiver provide the data from which the PPP algorithm derives accurate positions. This is currently a GPS only service, but there are plans for it to be expanded to the Russian GLONASS system and other GNSS constellations.

PPP currently has disadvantages. One of the most persistent is the time necessary to resolve the cycle ambiguity. The time necessary to move from a float to a fixed solution is extended because the ambiguity cannot be assumed to be an integer as it is in a differenced solution. As things stand, the convergence can take 20 minutes or more. The situation may be improved with the increase in satellite observables that will come with the inclusion of GLONASS in the IGS PPP solution.

If data about precise satellites orbits and the clocks are available, a single receiver can achieve accuracies commensurate with those available from differenced measurements. This can be done without the user establishing control stations or using corrections directly from continuously operating reference stations. PPP is more consistent over large areas than are the usual results from difference observations, and it works over longer baselines.