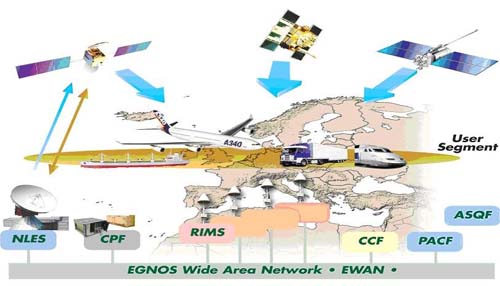 The European Geostationary Navigation Overlay Service (EGNOS) has a similar configuration and augments GPS and GLONASS using three geostationary and a network of ground stations. The Japanese system is known by the acronym MSAS and India's is the GPS And Geo-Augmented Navigation (GAGAN) system. 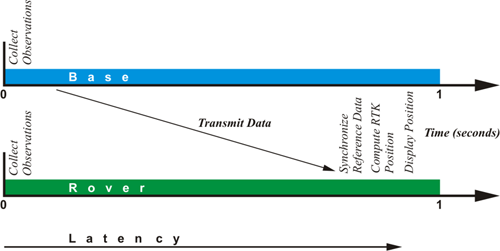 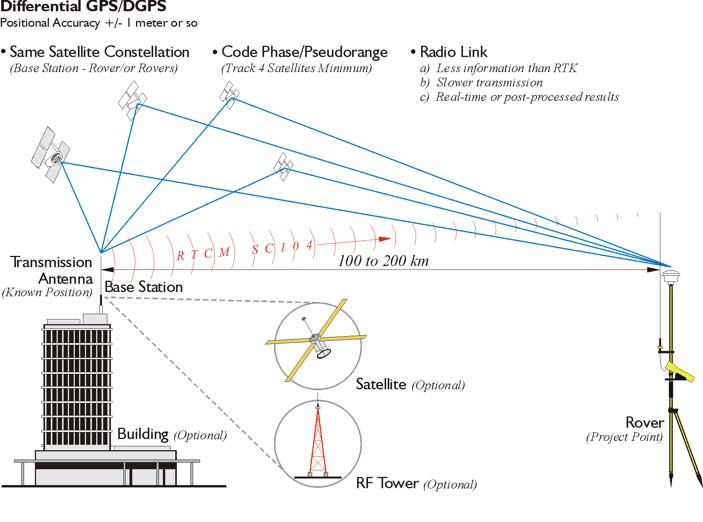 DGPS requires that all receivers collect pseudoranges from the same constellation of satellites. It is vital that the errors corrected by the base station are common to the rovers. The rover must share its selection of satellites with the base station; otherwise it would be necessary to create differential corrections for all the combinations of all the available satellites. That could get unmanageable in a hurry, for example, with just four satellites above the observer’s horizon, there can be more than 80 such combinations.

Aerial navigation, marine navigation, agriculture, vehicle tracking, and construction utilize DGPS. DGPS is also useful in land and hydrographic surveying, but perhaps the fastest growing application for DGPS is in data collection, data updating, and even in-field mapping for Geographic Information Systems (GIS). GIS data has long been captured from paper records such as digitizing and scanning paper maps. Photogrammetry, remote sensing, and conventional surveying have also been data sources for GIS. More recently, data collected in the field with DGPS has become significant in GIS.

GIS data collection with DGPS requires the integration of the position of features of interest and relevant attribute information about those features. In GIS, it is frequently important to return to a particular site or feature to perform inspections or maintenance. DGPS with real-time correction makes it convenient to load the position or positions of features into a data logger, and navigate back to the vicinity. But to make such applications feasible, a GIS must be kept current. It must be maintained. A receiver configuration including real-time DGPS, sufficient data storage, and graphic display allows verification and updating of existing information.

DGPS allows the immediate attribution and validation in the field with accurate and efficient recording of position. In the past, many GIS mapping efforts have often relied on ties to street centerlines, curb-lines, railroads, and so forth. Such dependencies can be destroyed by demolition or new construction. But, meter level positional accuracy even in obstructed environments such as urban areas, amid high-rise buildings, is possible with DGPS. Therefore, it can provide reliable positioning even if the landscape has changed. And its data can be integrated with other technologies, such as laser range-finders, and so forth, in environments where DGPS is not ideally suited to the situation. Finally, loading GPS data into a GIS platform does not require manual intervention. GPS data processing can be automated; the results are digital and can pass into a GIS format without redundant effort, reducing the chance for errors.