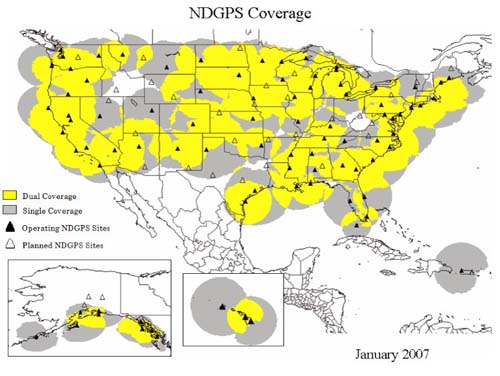 Both the U.S. Coast Guard (USCG) and the Canadian Coast Guard (CCG) instituted DGPS services to facilitate harbor entrances, ocean mapping, and marine traffic control as well as navigation in inland waterways. Their system base stations beacons broadcast GPS corrections along major rivers, major lakes, the east coast, and the west coast. The sites use marine beacon frequencies of 255 to 325 kHz, which has the advantage of long range propagation that can be several hundreds of kilometers. Access to the broadcasts is free, and over recent years the service has become very popular outside of its maritime applications, particularly among farmers engaged in GPS aided precision agriculture. Therefore, the system has been extended beyond waterways across the continental U.S. and is now known as the Nationwide DGPS (NDGPS). Another U.S. DGPS service initiated in 1994 cooperatively by the Department of Transportation and the Federal Aviation Administration (FAA) is known as WAAS (see figure above). It is available to users with GPS receivers equipped to receive it. The signal is free. The official horizontal accuracy is 7.6 m, but it often delivers better. It utilizes both satellite-based augmentation systems, also known as SBAS, and ground-based augmentations and was initially designed to assist aerial navigation from takeoff, en route through landing. Reference stations at known locations are the bases on the ground. They send their data via processing sites to three Ground Earth Master Stations that upload differential corrections and time to three commercial geo-stationary satellites devoted to transmission of GPS differential corrections to users on the ground. DGPS requires that all receivers collect pseudoranges from the same constellation of satellites. It is vital that the errors corrected by the base station are common to the rovers. The rover must share its selection of satellites with the base station. 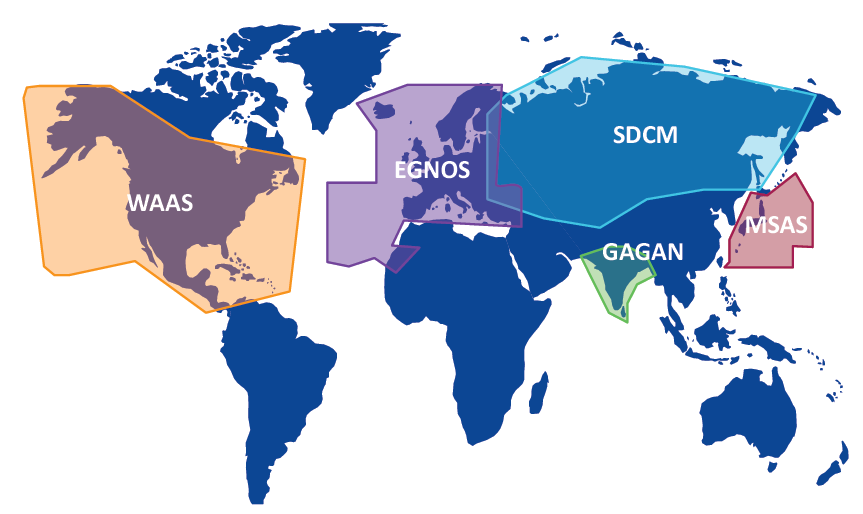