The Quasi-Zenith Satellite System and IRNSS also known as NavIC The first demonstration satellite of the Japanese Quasi-Zenith Satellite System (QZSS), QSZ-1 was launched in 2010 by the Japan Aerospace Exploration Agency (JAXA) from the Tanegashima Space Center. It is expected to have a design life of 10 years. The system is nicknamed Michibiki, meaning guide. Three more satellites were launched in phase two in 2017. They include 2 additional quasi-zenith satellites, QZ-2 and QZ-3 and 1 geostationary satellite, QZ-4 which is on orbit at the equator. The 4 satellite constellation is planned to increase to 7 satellites in the future. 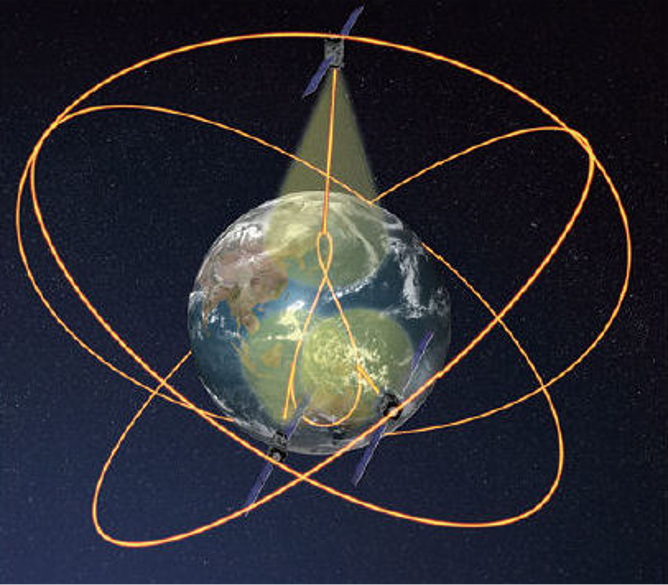 QZSS is intended to provide satellites in highly elliptical orbits (HEO) that are inclined and geosynchronous. The orbits are designed so the satellites will always be available at high elevation angles that are almost directly overhead in Japan, Oceania and East Asia. This is the origin of the term quasi-zenith. They orbit at ~32000 km to ~40000km. and all follow the same asymmetrical figure-8 ground track in the region.  QZSS is primarily a multi-satellite regional augmentation system (SBAS).  The system offers both Sub-meter Level Augmentation Service (SLAS) and Centimeter Level Augmentation Service (CLAS). Service began November 1, 2018. 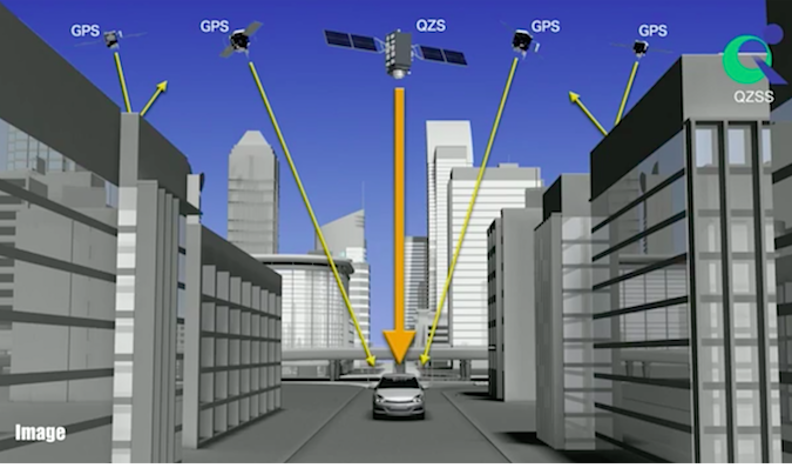 The objective is to improve satellite positioning, navigation and timing services in urban canyons and mountainous areas in the region. The system is designed to improve the positioning of GPS and Galileo receivers. The system transmits 6 signals; L1-C/A, L1C. L2C, L5, L1-SAIF and LEX. The first 4 on the list are the familiar GPS signals. The others are unique to QZSS. L1-SAIF (Submeter-class Augmentation with Integrity Function) is broadcast at the L1 frequency, 1575.42 MHz. It is interoperable with GPS and is intended to provide a sub-meter correction signal to users. Another unique signal to be broadcast by QZSS is LEX (L-band Experiment) at 1278.75 MHz. LEX is being developed to provide high accuracy positioning that is interoperable with Galileo E6. QZSS will broadcast multiple frequency signals and also provide a short message service (SMS) as does the Chinese BeiDou system. There may be user fees developed for these signals and services.

The commercial portion of the QZSS operation will be managed by Quasi-Zenith Satellite System Services Inc. (QSS). The system integration, research and development the QZS Bus, the ground segment, etc. will be under JAXA’s control. 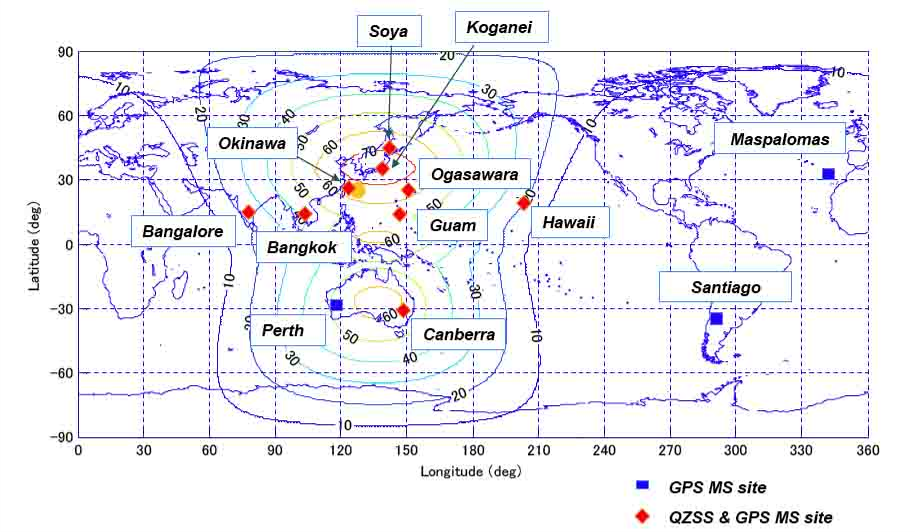 The Master Control Station (MCS) develops the ephemerides, time, and navigation messages which are uploaded to the QZS satellite constellation by the main Telemetry, Tracking and Command (TT&C) ground station in the Okinawa prefecture. Other monitoring stations on Japanese territory are at Ogasawara, Koganei, and Sarobetsu. However, there are also monitoring stations in areas governed by other nations. They are on Hawaii, Guam, Bangkok, Bangalore, and Canberra. The QZSS ground segment also includes laser ranging and tracking control stations (TCS). The main TCS station is at JAXA's Tsukuba Space Center.

The reference system for QZSS is the Japanese Satellite Navigation Geodetic System (JSG) which is quite near The International Terrestrial Reference System (ITRS). The time reference for QZSS is known as Quasi-Zenith Satellite System Time (QZSST). The system does not use leap seconds. The duration of the second in this system is the same as that in TAI (International Atomic Time). 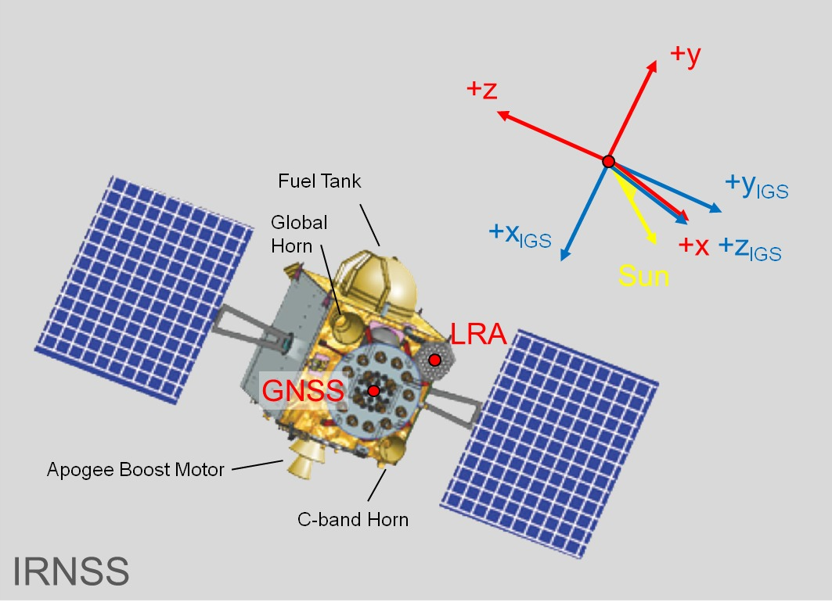 The building of the Indian Regional Navigation Satellite System (IRNSS) was authorized by the Indian government in 2006. When fully developed by the Indian Space Research Organization (ISRO), the constellation will provide position, navigation, and timing service in a region from Latitude 30° S. Latitude to 50° N. Latitude and from 30° East Longitude to 130° East Longitude. The region embraced is approximately 1500 kilometers around India. The constellation is also known as NavIC (Navigation with Indian Constellation; also, nāvik 'sailor' or 'navigator' in Sanskrit, and many other Indian languages).

The IRNSS constellation is comprised of 7 operational satellites. All the satellites will be continuously visible to the extensive Indian control segment’s 21 stations located across the country including the Master Control Center (MCC) at Hassan, Karnataka. They are named with the prefix IRNSS-1. The constellation includes 3 of the 7 satellites in geostationary orbits at 32.5º East Longitude, 83º East Longitude and 131.5º East longitude and 4 of the 7 satellites are in geosynchronous orbits of 24,000 km apogee with an inclination of 29°. The small inclination is appropriate to the coverage of India as the nation is located in the low latitudes. The equator crossing of 2 of the geosynchronous satellite is at 111.75º East Longitude and 2 crosses the equator at 55º East Longitude.

IRNSS provides two levels of service, a public Standard Positioning Service (SPS) and an encrypted Restricted Service (RS). Both will be available on L5 and on the S band; however, the SPS signal is modulated by BPSK at I MHz and the Restricted Service will use BOC (5, 2). The navigation signals is broadcast on the S-band. ‹ Chinese BeiDou up The Future ›