As we have seen previously, the entire surface of the Earth has warmed by a bit less than 1°C over the past century. It is evident that the oceans, on average, have warmed a bit less than the land regions. The warming of the oceans has been damped by their greater thermal inertia — water has a greater heat capacity than land, and the oceans are several kilometers deep, and heat can efficiently be buried below the surface. 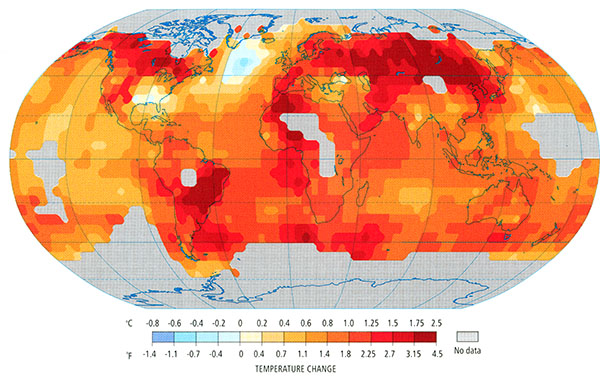 Part of the reason that the surface of the oceans is warming less than the land surface, then, is that a good deal of the heat is being buried below the ocean surface. In other words, the heating from global warming is slowly diffusing down through the ocean, warming the entire layer of ocean water several kilometers down below the surface. 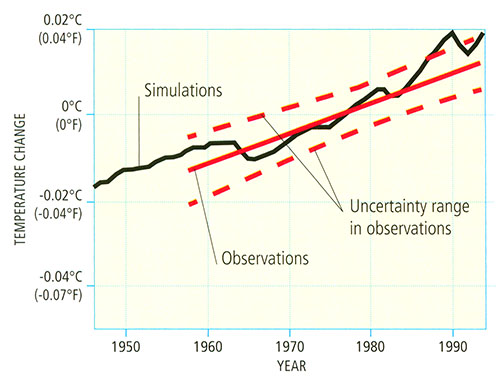 Because the processes (small-scale convection and diffusion) by which this heat penetrates down through the ocean are slow, these processes lead to a substantial delay in how the ocean (surface and sub-surface) warms in response to any given radiative forcing, including that due to increasing greenhouse gas concentrations. These considerations have profound implications for global sea level rise, as alluded to in the previous section on sea level rise. Because sea water expands with warming, ocean levels continue to slowly rise as the heating penetrates down through the deep ocean. As we will see later in the course when we discuss climate change impacts, it is such slow, delayed responses to global warming that leads to very long-term consequences of policy decisions being made today; global sea level will continue to rise for several centuries, even if we were to freeze greenhouse gas concentrations at current levels. Such lasting impacts of current human influences on climate are referred to as the committed climate change. They are part of the motivation for calls by many for immediate reductions in greenhouse gas emissions.

It is important to recognize that the oceans are not simply a passive reservoir for absorbing surface heating. They are, as we saw in our first lesson, highly dynamic. Oceans play a key role, for example, in transporting heat from low latitudes to higher latitudes to help relieve the imbalance in solar heating. Much of this transport takes place within the horizontal ocean gyres. As the gyres are governed primarily by the latitudinal pattern of variations in surface winds, they are relatively robust. Climate change may alter prevailing wind patterns somewhat, but the main features, e.g., the presence of easterly surface winds in the tropics and westerly surface winds in mid-latitudes, are not projected to change. Therefore, we don't expect substantial changes in the role played in the climate system by the horizontal ocean gyres.

There could be a larger role, however, played by the ocean's thermohaline circulation.

We know that the thermohaline circulation plays a significant role in the natural long-term variability of the climate system. Indeed, there is a mode of climate variability known as the Atlantic Multidecadal Oscillation (or simply 'AMO') that appears to arise from long-term oscillations in the North Atlantic component of the thermohaline circulation, although evidence is mounting that the AMO is not a reflection of internal variability.

As we will see later in this lesson, there is some evidence that a thermohaline circulation collapse scenario may have played out at the end of the last ice age, during a period known as the Younger Dryas. At that time, the large amount of meltwater produced from the initial termination of the ice age appears to have shut down the thermohaline circulation. Since the thermohaline circulation is a source of poleward heat transport in regions surrounding the North Atlantic, this event appears to have temporarily sent the climate back into a glacial state before the final termination of the ice age a thousand or so years later. Could such scenario play out because of human-caused climate change? We will revisit that question in a later lecture.