In order for us to connect sea level with our discussion on intrinsic and extrinsic controls and feedback mechanisms, etc., let's see another dataset that links climate history and sea level. The image below shows warm and cool periods for the last 900,000 years and has an expanded inset for the last 140,000 years. 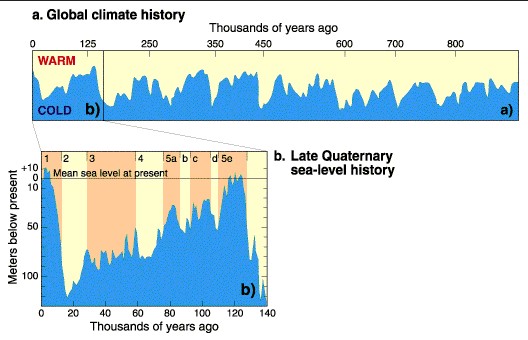 Eustatic sea level curve for the last 900,000 years. Sea levels are plotted relative to modern mean sea level. As you can observe in these graphs, sea level has been highly variable and “periodic” with sea levels higher during warm periods and low during cold periods. In fact, sea levels about 18,000 years ago were as much as 120 meters below present.
Credit: Seal level temp via Wikimedia Commoms from NOAA (Public Domain)

In the inset, you will notice the long-term decline in sea levels from the last interglacial warm period which occurred about 130 ky before the present. It is labeled stage 5e on the graphic. Sea levels declined to the lowest levels during stage 2 that occurred between 13,000 and 20,000 years ago. During this time, despite some minor short-term rise/fall events, sea levels fell from near modern sea levels to some 120 meters below present. The long-term rate of sea level fall calculation shows that sea levels fell 120 meters in approximately 100,000 years or 0.12 m / 100 years. That is, sea levels fell by some 12 cm per 100 years, or through a simple unit conversion, the rate can be stated as 1.2 mm/year.

This asymmetrical pattern of sea level rise/fall rates is repeated again and again for many of the earlier glacial-interglacial episodes. Thus, there is evidence that shows sea level fall (and building of ice sheets) is a long, drawn-out process where cooling and various positive feedback loops help to reinforce the cooling. The end result is an extended period of sea level fall (i.e., iteratively more albedo, and less and less insolation delivery, more cooling, etc.).

Conversely, once the factors that initiate warming begin to turn on, warming and associated sea level rise apparently can proceed at a much faster rate until a maximum sea level is reached, and factors that influence cooling initiate and bring sea levels down again.

Prior to the last few centuries, the system was controlled primarily by extrinsic and intrinsic variables. However, human impacts on landscapes, oceans, and climate (i.e., deforestation, greenhouse gas concentrations, nutrient runoff, aerosol pollution, and cloud development, etc.) have added variables that weren't present at any previous time (more on this later).

Now, let's look at a couple of more composite analyses that help us understand signals and signatures from the last few 1000 years. In the graphic below, a number of different datasets from Australia, South America, the Caribbean, the western Pacific, and other areas have been plotted to show sea level positions. Most of these datasets are derived from investigations of coral reefs that have drowned as sea level has risen. 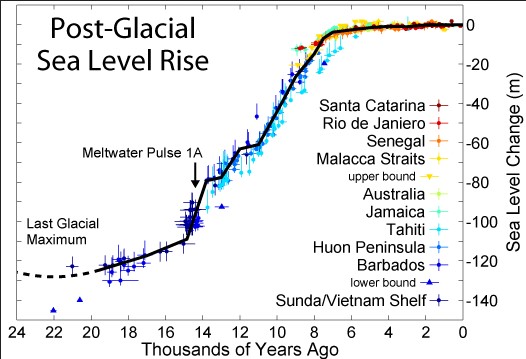 Holocene Sea Level curve showing the most recent period of rise and warming. Some of these data suggest that sea levels approached modern around 6,000 years ago, but may have actually exceeded modern sea levels in some regions (i.e., Malacca), but, on average, sea levels have been relatively slow to rise and have been fairly stable for at least the last few thousand years.
Credit: Image created by Robert A. Rohde / Global Warming Art

As these large ice sheets and their albedo potential was removed, the rate of absorbance of incoming solar radiation was likely to have contributed to further warming and increased temperatures of seawater. Thus, geoscientists are increasingly confident in the two primary factors that have contributed to the sea level rise rate prior to human influences. The primary cause is thought to be tied to thermal expansion of seawater as we discussed previously. The second is the role of melting glaciers and increased volumes of land-ice being moved to the oceans.