The world’s fisheries are in a state of crisis. Environmental changes and pollution combined with over-fishing and the rise of invasive species are deteriorating the health of the global fishing industry. Nothing is more symptomatic of this decline than the history of cod in the North Atlantic. Cod has long been a staple diet for societies in the region including Iceland and Scandinavia, and a century ago, they were so abundant that whole fisheries thrived on this one fish. Now, however, cod has been so overfished that conflicts over fishing rights have erupted (between Iceland and England in the 1950s to 1970s, dubbed the "cod wars") and populations have plummeted. The same countries that depleted the stock of cod are now overfishing other species including haddock and skate.

All of this comes at a time of growing consumption of fish. The Intergovernmental Panel on Climate Change (IPCC) predicts that global fish production will increase from 2012 to 2020, but not as rapidly as will demand. Wild fish will comprise the majority of fish caught in sub-Saharan Africa and the US, but in other parts of the world, aquaculture will increase in importance. It could be that aquaculture or fish farming will dominate fisheries by the end of the century. However, aquaculture has its own set of issues. For carnivorous fish such as salmon, fish farming utilizes a considerable supply of feeder fish. Moreover, fish farms are at a significant risk of environmental problems and are susceptible to outbreaks of disease.

The superb overview of the state of the modern ocean by Jeremy Jackson identifies several distinct habitats and ecosystems that are in a significant state of decline: 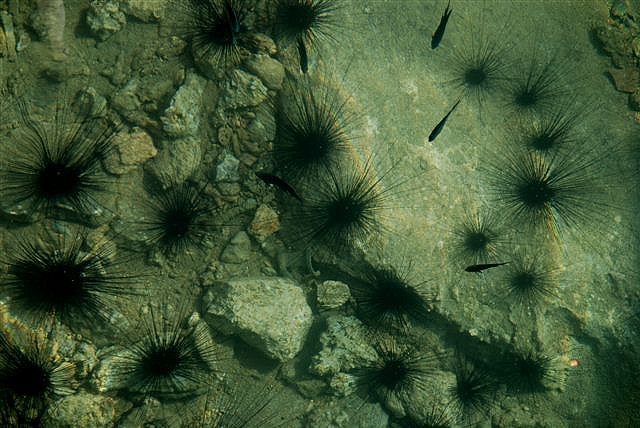 Sea urchins often colonize the ocean floor where other organisms have been depleted by pollution or other factors
Credit: nickyfern from Flickr (CC BY 2.0) 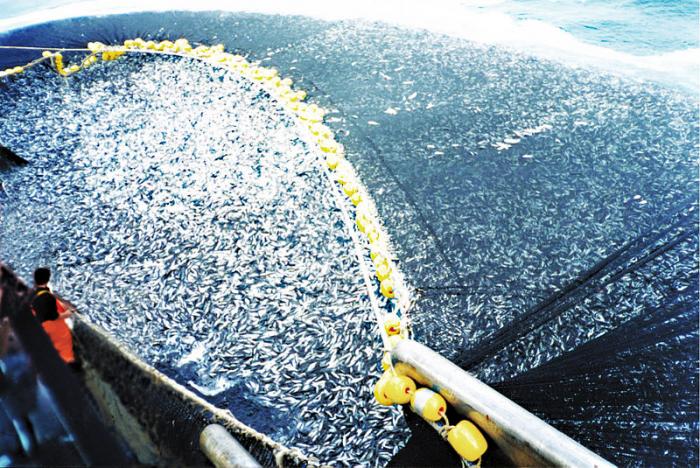 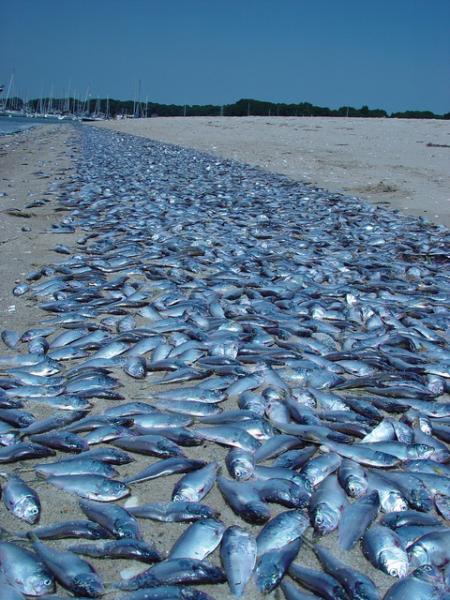 Fish kill in Rhode Island as a result of hypoxia.
Credit: eutrophication&hypoxia from Flickr (CC-BY 2.0)

As a result of all of these changes, over 100 species of fish are currently on the extinction watch list. Estimates suggest that biomass produced by fish has declined by more than 50% in the last 40 years. Some scientists are warning of a complete collapse of marine fisheries by 2050, which would be a devastating problem for communities that rely on fish as the major source of food.

The following video describes the stark future of global fisheries as a result of overfishing:

Video: Overfishing - The consequences (2:34) This video is not narrated.

“For every pound [of seafood] that goes to market, more than 10 pounds, even 100, may be thrown away as by-catch.” Sylvia Earle 90% of large predatory fish such as tuna, swordfish, sharks, are now gone.

A study done by the Dalhousie University of Canada projects that by 2048 all the species that we fish today will be extinct. That is in 38 years.

So, aside from those of us who enjoy the occasional salmon sashimi, spicy tuna rolls, salted grouper, or pan roasted Chilean sea bass, why should humanity care about the extinction of these species? We are destroying a food chain system kept in balance by evolution through millennia. There will be no big fish to eat the medium fish. And too many medium fish to eat all the small fish. And then there is no one to eat the really small organisms: the plankton, the algae, etc.

The result, slime: shorthand for the increasingly frequent appearance of dead zones, red tides, and jellyfish that, when they die out, sink to the bottom of the ocean to mix with dissolved oxygen while they rot. Nothing can live in these oxygen-depleted waters, except… bacteria. So it’s like we are getting rid of the complex, sophisticated organisms that took millions and millions of years to develop.

And… replacing them with the most basic ones. Not the wisest of evolutionary strategists, are we?